Hundreds of Londoners have defied coronavirus restrictions and rallied in Trafalgar Square and outside the US embassy in solidarity with protests raging across the United States over the death of George Floyd. 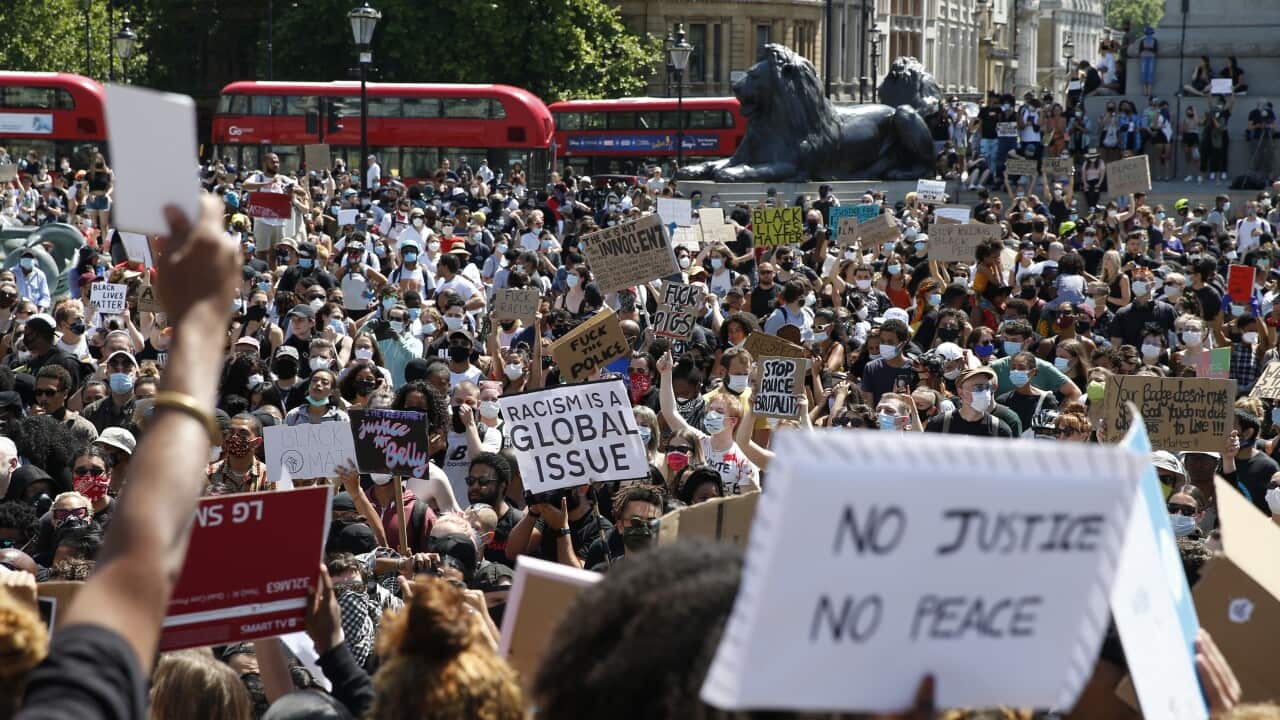 Londoners hold placards as they join a Black Lives Matter march at Trafalgar Square to protest the death of George Floyd in Minneapolis. Source: Getty

Hundreds of Londoners defied coronavirus restrictions and rallied outside the US embassy on Sunday in solidarity with protests raging across the United States over the death of an unarmed black man during an arrest.

The death of George Floyd in Minnesota has sparked five consecutive nights of often violent protests that resulted in National Guard troops patrolling majority US cities on Sunday.

The London protesters chanted: "No justice, no peace" and "Enough is enough" as they marched towards the US embassy compound on the southern bank of the Thames River.

Earlier, a few hundred had earlier gathered in Trafalgar Square in the heart of London for a vigil that saw everyone kneel for nine minutes - the amount of time the policeman kneeled on George Floyd's neck.


When you take someone's life, the way that happened, then it does something to you wherever you are in the world - because it was totally wrong," one demonstrator, Trevor Joseph, told AFP.

"It's a worldwide thing. It happens in America and we have to show solidarity," he added.

"I'm here because I'm tired, I'm fed up with it. When does this stop?" another protester, Doreen Pierre, told AFP.

But he refrained from commenting on US President Donald Trump's explosive tweets and controversial public statements about the protests.

"I've long kept to the self-imposed guidance not to comment on what President Trump says," Mr Raab told the BBC.

Authorities will officially allow groups of up to six to gather in England - and up to eight in Scotland - starting on Monday as more than two months of restrictions begin to ease.

In Germany, thousands rallied outside the US embassy in Berlin, calling for justice for George Floyd.

Protesters held up signs reading “Black Lives Matter” and “My skin colour should not be my death sentence.”

A mural depicting George Floyd alongside the words "I can't breathe" was painted on a part of the Berlin Wall.