Three kids and no computer: the families hit hardest by Australia's school closures

The move towards remote learning during the coronavirus pandemic has exacerbated the ‘digital divide’ that already exists among Australia's low-socioeconomic communities, family and education experts have told SBS News. 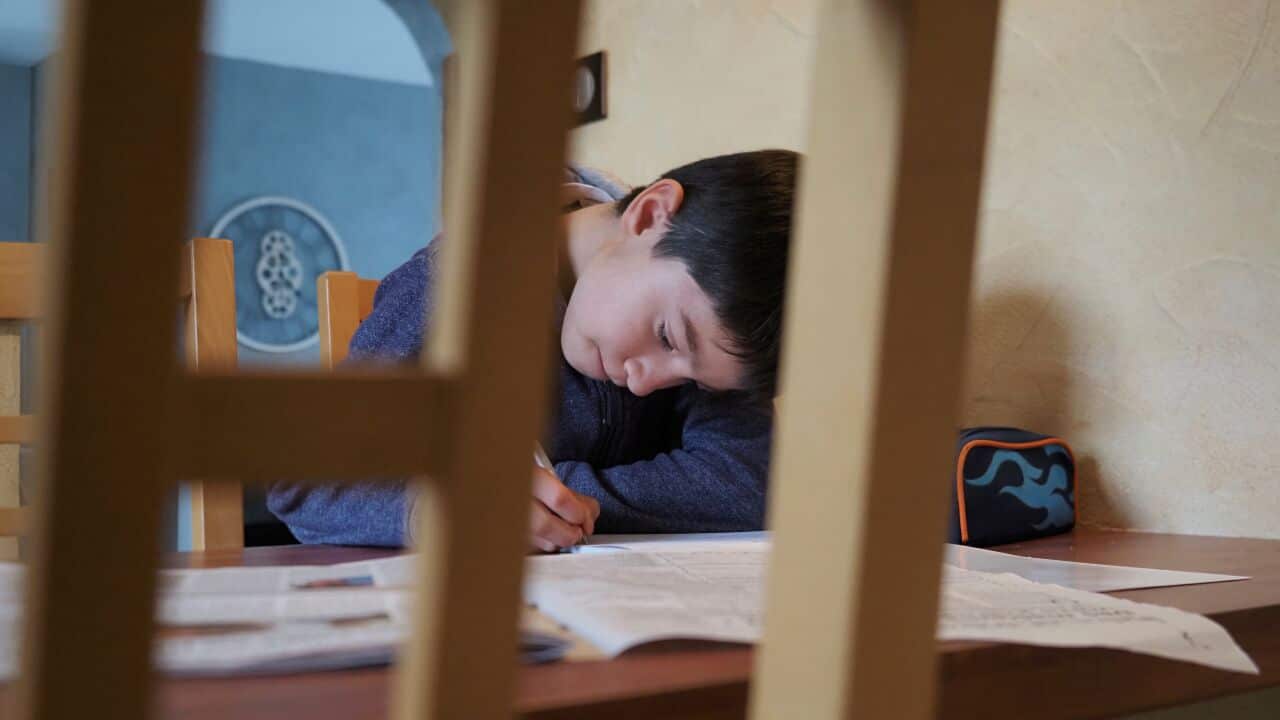 Children around the world are having to do their schoolwork at home, including in Australia (not pictured). Source: AFP/Getty Images

When Rana Luka’s three sons sit down to do their schoolwork from home, it isn’t in front of a digital conference call with their teachers, or even a computer.

The Iraqi family of five from Green Valley in Sydney’s Western suburbs arrived in Australia from Lebanon in November last year and have been forced to quickly adjust to learning from home after their first term at an Australian school was interrupted by the coronavirus pandemic.

But without access to a computer or iPad, Ms Luka's children - aged 12, 14 and 18 - are left to use a pen and paper to complete their work. When they can’t understand a word in English, they use their mobile phone to look up translations.

Advertisement
“We need a laptop or iPad, this kind of modern technology so they can use that for study,” she told SBS News, speaking in Arabic.

“There are some online files that they cannot download as their mobile phones are old.”

She said her family were using YouTube videos and foreign films with English subtitling to learn how to read and write in English, but it hasn’t been easy.

“My youngest son … found it very difficult in the beginning, especially the first two weeks. He used to cry because others kept telling him he cannot speak [English],” she said.

Her eldest son is in his final year at a Western Sydney public school, with hopes of studying business or construction after he graduates.

As schools across Australia rushed to develop remote-learning technology to continue lessons during the COVID-19 lockdown, few answers were given about what to do for students who didn’t have access to basic technology at home.

Some schools began shutting down in-person learning in March, with Prime Minister Scott Morrison telling parents they could keep their children home if they wanted to.

Last week, he
urged teachers to reopen schools after the Easter break
, citing the impact on disadvantaged and lower-income families who have to choose between teaching their children and “putting food on the table”.

“It is even more essential for those vulnerable students who we know won’t get an education at home. It’s a sad reality but we know it’s true and we have to face it,” he said in a video posted to social media.

“We will lose many things in the course of fighting this virus. One thing that I know teachers are united on, with their parents, is we do not want one of those things to be the loss of a child’s education, giving up a whole year of their learning.”

But the decision on whether to keep schools open ultimately falls to the state and territory leaders, with education departments across the country shifting to online learning but ensuring campuses remain open for children of essential workers.

In Queensland, lessons will be online for the first five weeks of the second term, as is the case in the Australian Capital Territory and Tasmania. Western Australia and South Australia are planning for a mixture of home and at-school learning, while Northern Territory children are expected to attend school from this week.

For New South Wales, where the Luka family live, term two will start on 27 April with students expected to make a staggered return - one day a week to begin with - from 11 May.

In response, schools have been quick to roll out digital syllabuses, with many relying on Google Classroom to conduct online lessons once the majority of students began to be kept home.

On Tuesday, the UN's educational agency UNESCO  announced that half of the world's school and university students affected by COVID-19 class closures did not have access to a computer, and 43 per cent of young people had no access to the internet at home.

"Disparities are particularly acute in low-income countries: in sub-Saharan Africa, 89 per cent of learners do not have access to household computers and 82 per cent lack internet access," the agency said.

But the digital divide is evident in Australia too.

Carey Simms, who is a family partnership coordinator with disadvantaged children's charity The Smith Family in South Australia, sees the issue first-hand.

He said he has received a number of calls from families he works with who have been concerned about their children's ability to participate in online learning.

The closure of public libraries, often a sanctuary for disadvantaged students, has also been a blow, Mr Simms said. “The home environment is often chaotic with a lot of these families … there is not a quiet space to learn.”

“We might think that for a typical student it’s not a huge deal if there are a few months studying from home … and it might be true that in that situation there is not a lot of learning lost,” he said.

“But the truth is for disadvantaged families, where parents have to work outside, or there are no education resources at home, or they don’t have access to fast and reliable internet, students in those situations are going to learn a lot less.”

Socio-economic status was also a “strong predictor of performance in mathematics and science” in all participating countries, according to the Programme for International Student Assessment (PISA) report.

“There is, on average, a significant difference between the academic achievement of advantaged students and disadvantaged students,” Mr Joseph said. “What we’re seeing here, is we could see an exacerbation of that.”

Some NSW public schools have announced they would loan laptops to students who do not have access to a computer at home, but it is unclear whether this will be available to all students across the state and how it would be managed.

A NSW Department of Education spokesperson said it had provided 4,200 devices, including computers, modems and 4G internet dongles, to in-need students, with more deliveries to take place once term two is underway.

“The department is focused on getting resources to students in need as soon as possible with priority for Year 12 students and disadvantaged students in rural and remote schools,” they said.

The spokesperson also said schools are being flexible in meeting students' needs, including providing hardcopy worksheets, workbooks and textbooks when necessary.

But both Mr Joseph and Mr Simms agree that educational disadvantage depends on more than technology - often it is the lack of parental support or a safe space to learn, they say.

And for those like the Luka family, who have language barriers, Mr Joseph said it was
a matter of identifying which students have an extra educational need
and addressing that - not treating all students in the same way.

It’s important that students go back to school “as soon as possible, and as soon as safe”, Mr Joseph said.