It comes as New South Wales recorded 10 Omicron cases in a single day, while Victoria reported more than 1000 new infections. 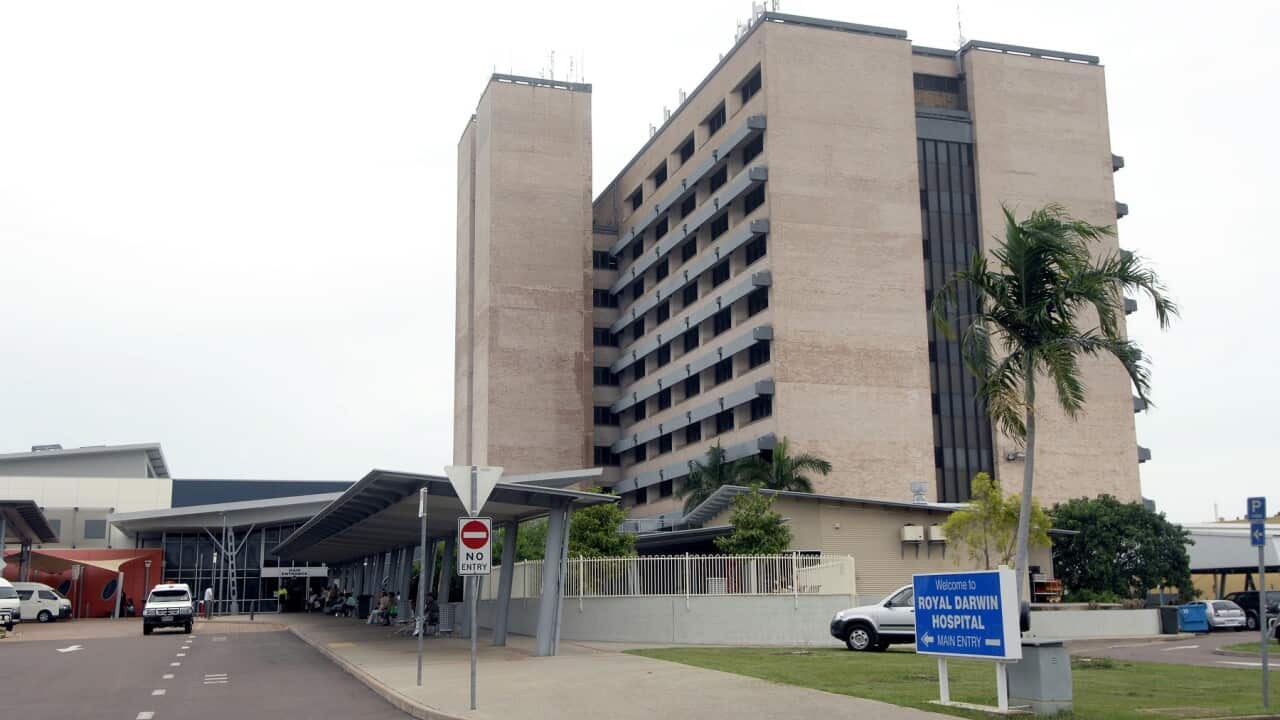 A toddler with COVID-19 has been transferred to Royal Darwin Hospital. Source: AAP

A three-year-old Northern Territory girl with COVID-19 has been transferred to Royal Darwin Hospital.

It is not known if she is symptomatic or the move was precautionary.

The toddler's case was announced earlier on Monday when Health Minister Natasha Fyles said the child had attended Katherine Hospital a day earlier.

Advertisement
"It was at that point she received a PCR test and that has come back positive," Ms Fyles told reporters at the time.

An NT government spokeswoman later said the girl had been transferred to The Centre for National Resilience quarantine facility with a household contact.

A press release has since been released saying the toddler had been moved to Darwin's main hospital.

They are also attempting to trace the group's movement in the Katherine community.

The girl is not a known contact for another case and more infections are expected.

Ms Fyles said the case was likely to be linked to persistent positive wastewater tests in Katherine, 320km south of Darwin.

A lockout in the town has been extended for 24 hours and is now scheduled to end at midday on Wednesday.

A lockdown in the nearby Binjari Aboriginal community is set to be eased to a lockout on Tuesday at midday after the latest round of tests returned negative results.

A woman in her 60s arrived from London a week ago and tested positive while in quarantine at her home with one other person.

Both have been transferred to the Howard Springs quarantine facility, near Darwin.

The other case is a man in his 20s who arrived from Melbourne at the same time.

He was quarantined at home with a person who became infected with the virus and has now also been moved to the quarantine facility.

The travellers' cases are not considered to be a threat to the NT community.

Genomic testing to confirm what strain of the virus all the new cases are infected with is underway.

A further 10 cases of people being infected with the Omicron COVID-19 variant have been recorded in NSW, taking the total to 25.

NSW Health said nine of the new cases are linked to a cluster at a school and climbing gym.

This number does not include a Canberra person who is believed to have contracted the virus at the Sydney Indoor Climbing Gym in Villawood on 27 November.

The state's adult vaccination rate remains at 94.6 per cent first-dose coverage while 92.8 per cent are fully vaccinated.

There are 152 people with COVID in NSW hospitals, 24 of them in ICU.

Meanwhile, NSW authorities are trying to track down the source of the Omicron cluster at St Peter Chanel Catholic Primary School in western Sydney.

A student at the Regents Park school is believed to have acquired an Omicron infection at the Villawood indoor climbing gym.

All year three and year four students and teachers at the school are close contacts and are isolating.

NSW Health continues to investigate the source of infection of the cluster of COVID-19 cases.

Victoria has recorded 1,073 new COVID-19 infections and another six deaths, as the premier pledges to try to keep the state's border open amid the Omicron variant spreading elsewhere.

There are 310 patients in the state's hospitals, 90 of whom are in intensive care and 19 requiring ventilation.

Virus testers in Victoria processed 56,337 results on Sunday, while 1,513 people were vaccinated in state-run hubs.

More than 91 per cent of Victorians over 12 are fully vaccinated.

Chair in epidemiology at Deakin University Catherine Bennett says the new strain is spreading faster than Delta but the symptoms are less severe.

"You do not want that increase in infectiousness coinciding with even the same level of illness," Professor Bennett told ABC TV on Monday.

"So the fact that it is presenting with more mild illness so far is really encouraging given that high rate of spread.

"And if it does just have that edge on Delta and were to replace Delta in other settings, then it's important that it's not putting more pressure on hospital systems," she said.

"It would be even better if it was putting less," she said.

Meanwhile a pilot program to return international students to the state starts on Monday, with up to 250 students expected to arrive on a charter flight who will then isolate at a student accommodation facility for three days.

Other international students will have to wait until 15 December, after the federal government paused the easing of border restrictions due to the Omicron COVID-19 variant.

It comes as Premier Daniel Andrews says the state won't pursue an "Omicron zero" strategy, despite it being among Australian states yet to record a known case.

South Australia reimposed testing requirements for all arrivals from Victoria, NSW and the ACT on Saturday over concerns about the new strain, and Premier Steven Marshall hasn't ruled out shutting the border altogether.

Mr Andrews said he and his NSW counterpart Dominic Perrottet texted about the new variant and are aligned on working to keep borders open ahead of Christmas.

"I've never been one to criticise other states making what they believe to be the right choice, but we will not be pursuing an 'Omicron zero' here," he told reporters on Sunday.

"We don't think that makes any sense. It may already be here. The good news so far is whilst it's more infectious, the evidence suggests it is milder."

Six new COVID-19 cases have been reported in the ACT, and the number of active cases has fallen to below 100 for the first time since August.

Health officials also said Canberra has now achieved a 98 per cent fully vaccinated rate for people aged 12 and over, the highest rate of any jurisdiction.

ACT Health said there were 98 currently active cases, and there have been two cases of the Omicron variant detected in Canberra since Friday.