Rescue teams in Indonesia are still searching for survivors days after a 6.2-magnitude quake struck the island of Sulawesi, killing at least 81 people. 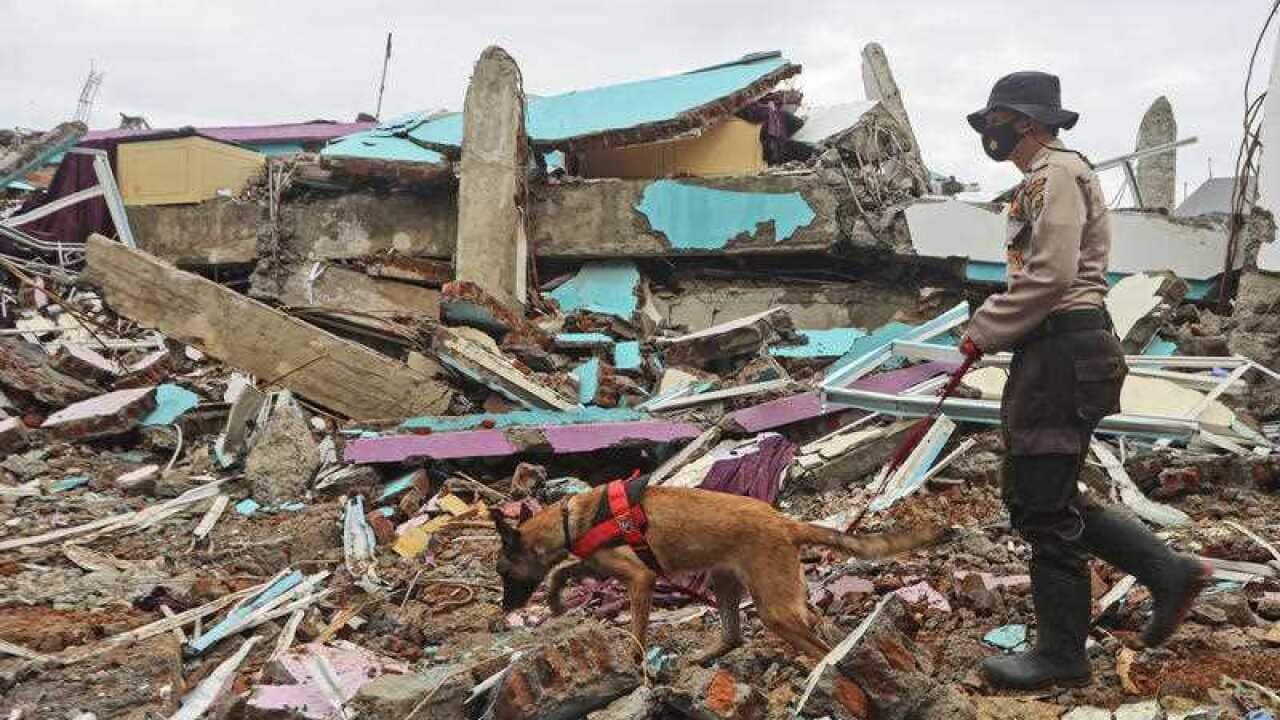 A police officer leads a sniffer dog during a search of victims at the ruin of a building flattened by an earthquake in Mamuju, West Sulawesi, Indonesia. Source: AAP

Torrential monsoon rains hampered the search for anyone still buried alive under buildings flattened by a powerful earthquake on Indonesia's Sulawesi island, after the huge tremor killed at least 81 and left thousands homeless.

Excavators and cranes were deployed across the devastated seaside city of Mamuju, where buildings were reduced to a tangled mass of twisted metal and chunks of concrete, including a hospital and the regional governor's office.

It was unclear how many people, dead or alive, could still be under mountains of debris in the aftermath of Friday's 6.2-magnitude quake.

"The rain poses risks because damaged buildings could collapse if it gets too heavy...and aftershocks could move them too," said rescuer Octavianto.

Excavating debris too fast with heavy equipment could crush and kill any buried survivors, he added.

"All the victims we've found so far were dead," said Octavianto, 37, who like many Indonesians goes by one name.

"It is most likely any more victims are already dead if 24 hours has passed," he added.

Scores of rescuers combed through the destruction, filling body bags with corpses, while police on Sunday deployed a K-9 unit of sniffer dogs to help in the search at a badly damaged hospital.

"We also use our own sense of smell to find possible victims," said rescuer Kustang Firman at the hospital scene.

"If there's a strong scent (of decay), we'll focus on that spot."

Soldiers clear away debris while looking for victims. Source: AAP

Most victims were found in Mamuju, but some were also recovered south of the city of 110,000 people in West Sulawesi province.

"All I had in my mind was that I would die... Everyone was panicking."

Authorities have not given a figure for how many survivors have been rescued.

A pair of young sisters plucked from under the mass of concrete and other debris were treated in hospital.

Meanwhile, corpses were recovered from under a collapsed hospital, while five members of a family of eight were found dead in the crumpled remains of their home.

Doctors treated patients with broken limbs and other injuries at a makeshift medical centre, set up outside the only hospital in Mamuju that survived relatively intact.

Wawan, who was buried under his house until neighbours pulled him to freedom, initially didn't want to go into a hospital to treat his broken foot, fearing another quake.

Thousands left homeless by the quake took to makeshift shelters, many little more than tarpaulin-covered tents filled with whole families.

Many survivors were unable to return to their destroyed homes, or were too scared to go back, fearing a tsunami sparked by aftershocks, common after strong earthquakes.

"It's better to take shelter before something worse happens," said Mamuju resident Abdul Wahab, from inside a tent with his wife and four children, one of whom is just a baby.

Fearing an outbreak of coronavirus in the crowded camps, authorities were trying to separate high and low risk groups.

People who are displaced by an earthquake sit under in a makeshift tent at a temporary shelter in Mamuju, West Sulawesi. Source: AAP

Landslides sparked by torrential rains killed at least 32 on Java island, while dozens are dead or missing after severe flooding pounded another part of Sulawesi and Kalimantan, Indonesia's section of Borneo.

Volcano Mount Semeru shot a plume of ash and debris some 4.5 kilometres into the sky Saturday night as bright red lava flowed down from its crater. There were no reports of casualties.

And on December 26, 2004, a massive 9.1-magnitude earthquake struck off the coast of Sumatra, triggering a tsunami that killed 220,000 throughout the region, including 170,000 in Indonesia, among the worst recorded disasters in history.