Prime Minister Scott Morrison is meeting with the National Farmers' Federation, Red Cross, Tourism and Transport Forum Australia to develop a plan to revive the economies of fire-ravaged communities. 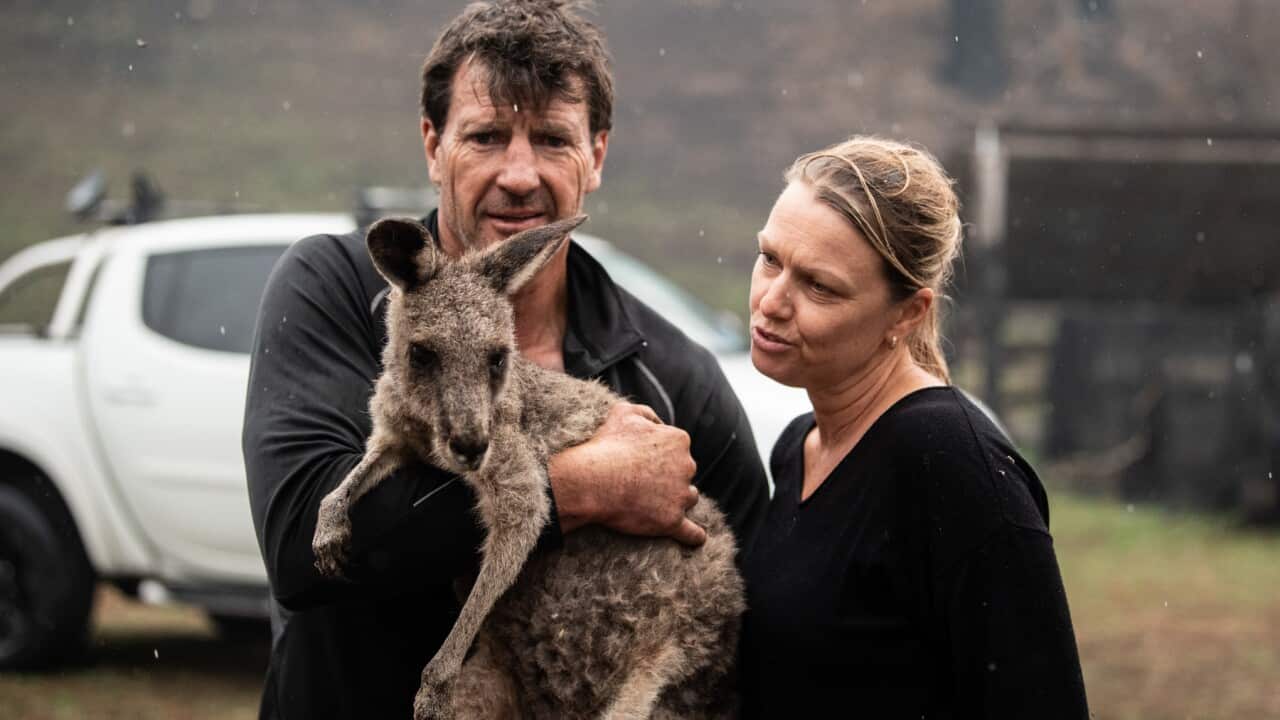 Gary Henderson and Sara Tilling ran the Cobargo Wildlife Sanctuary from their home, which they lost, along with all their animals, barring one kangaroo. Source: AAP

The Australian Tourism Export Council says a survey it has conducted shows there have been tourist cancellations for 70 per cent of its 850 members, Each cancelled trip ranged in value from $5,000 to 500,000.

The council's managing director, Peter Shelley, told the Australian Financial Review newspaper that the cancellations have come mostly from key markets such as the US, Britain and China.

"Members are saying all price points of the tourism market have been affected, from high net worth individuals cancelling a trip that was to include multiple luxury lodges in most states, through to 'mums and dads' opting out of a local cruise or a nature-based experience," Mr Shelley said.

The fires, which have killed 29 people and razed bushland across an area the size of Bulgaria, have hit several coastal towns at the height of the profitable summer season.


'We are worried about the contagion'

Even though recent cooler conditions have led some tourist destinations to reopen after they were evacuated because of the fires, people remain wary of visiting.

An image of the Grose Valley fire in the Blue Mountains area of Lithgow and Blackheath, New South Wales, issued on 9 January 2020. Source: SBS / , Supplied/Ministry of Defence

Images of burnt-out towns, people huddled on beaches to escape huge flames, dead wildlife and thick smoke hanging over major cities have been beamed around the world.

The qualifying rounds of Australian Open in Melbourne this week, the first tennis Grand Slam of the year, have been blighted by complaints from players about the pollution.

“The imagery of the fires in the global marketplace is very bad for our country,” Westaway said. “We are worried about the contagion that may have.”

Tourism accounts for more than 3 per cent of Australia’s A$1.95 trillion economy, with 9 million foreigners visiting the country annually and domestic tourism growing.

Accommodation booking cancellations in non-fire zones have reached upwards of 60 per cent, while in fire-affected areas there were no tourists at all, Westaway said. Many destinations rely heavily on domestic tourism, as well as international visitors.

This week’s wet weather brought some temporary respite for fire-hit areas, but also came with the warning of potential flash floods and lightning that could ignite new fires.

Prime Minister Scott Morrison earlier this week welcomed a US move to downgrade a travel warning and has stressed that Australia is open for business.

Birmingham said he is seeking firsthand feedback from tourism bosses after meeting with them on Thursday to devise a strategy to reassure visitors that many tourism destinations are untainted by fires.

Simon Westaway said the meetings convened by the federal government have been productive, but added the follow-through will be critical.

“Now is the time for clear and demonstrative actions that Australia’s tourism industry – in practice and in perception – is open for business! It requires substantive investment because the early signs around international visitor demand, including cancelled bookings to Australia, is concerning."

Agriculture Minister Bridget McKenzie met with representatives from the transport and farm sectors on Thursday to discuss what more can be done to get rural industry back on its feet.

Prime Minister Scott Morrison will meet with a bushfire peak bodies roundtable in Canberra later today, which will include the National Farmers' Federation, Red Cross, Tourism and Transport Forum Australia and many more stakeholders.

Meanwhile, tourists are being urged to return to the Blue Mountains in New South Wales.

Visitors are being urged to start
planning trips
to explore the World Heritage-listed region.

“We have incredible experiences on offer to cater for everyone, and many local businesses who really need your support right now," said President of Blue Mountains Tourism, the region’s peak tourism body, Jason Cronshaw.

"So please make a day trip or take a long weekend and head back to the Blue Mountains where you will be welcomed with open arms,” he said.


The New South Wales Rural Fire Service said the fires in the region have now been contained and it is safe for people to visit the area.

“Fire activity has eased over the past few days with the help of a cooler weather change. We’re expecting forecasted wet weather to see a further easing in fire activity," said Greg Wardle from the NSW Rural Fire Service.