Two days ago, Colorado was fighting catastrophic fires. Now it's blanketed by snow

Snow and frigid temperatures have compounded the misery of Colorado residents returning to salvage what remains of their homes following a devastating wildfire. 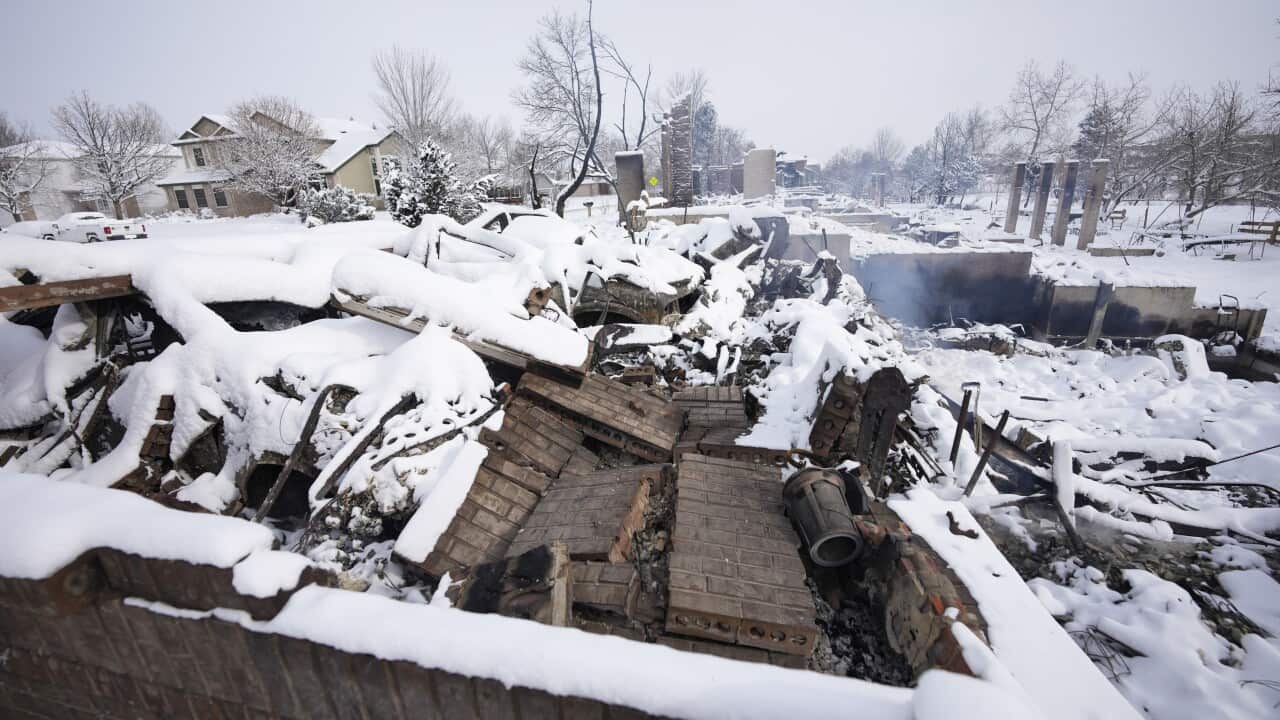 The remains of a home destroyed by a pair of wildfires is draped by snow Source: AP

Three people are missing and feared dead after a winter wildfire tore through several Colorado towns, quickly destroying nearly 1,000 homes as part of the latest in a string of US natural disasters.

"We're very fortunate that we don't have a list of 100 missing. But unfortunately we do have three confirmed missing people," Boulder County Sheriff Joe Pelle told a press conference.

At least 991 homes are thought to have been destroyed as the blaze raced through the towns of Superior and Louisville on Thursday, just outside the state's biggest city Denver, forcing tens of thousands of people to flee with little notice.

Advertisement
Those who have returned to their homes since the fires broke out are now contending with some 20 centimetres of snow.

A soot-covered US flag waves from the bed of a burned out truck in Louisville Source: AP

It cast an eerie scene amid the still-smouldering remains of homes. Despite the shocking change in weather, the smell of smoke still permeated empty streets blocked off by National Guard troops in Humvees.

Mr Pelle said the search for the missing had been hampered by the destruction and snow.

"The structures where these folks would be are completely destroyed and covered with about [20 centimetres] of snow right now."

Investigators found no credible evidence to back earlier reports that downed power lines may have caused the fire, with Mr Pelle stating that some residents may have been confused by downed telecom lines.

However, investigators have "executed a search warrant in one particular location" as part of an ongoing investigation that Mr Pelle described as "very active" and comprising federal and state partners.

The fire, which was sparked in a tinder-dry landscape, was then fanned by winds gusting at more than 160 kilometres an hour on Thursday.

"This was a disaster in fast motion... over the course of half a day. Many families having minutes to get whatever they could - their pets, their kids - into the car and leave," Governor Jared Polis said, "just as in the blink of an eye."

At least 33,000 people in Superior and Louisville were told to flee, many doing so with little more than the clothes on their backs.

Mr Pelle said he spoke to the granddaughter of one of the missing on Saturday morning.

While snowfall had helped extinguish the fire, it was a "hard thing for crime scenes, and recovery efforts and damage assessments," Mr Pelle said.

The fire, which occurred just before the New Year's holiday, follows mid-December tornadoes in the state of Kentucky that left dozens dead and thousands of families in crisis mode ahead of Christmas.

Although fires are a natural part of the climate cycle and help to clear dead brush, their scale and intensity are increasing.

Scientists say a warming climate, chiefly caused by human activities such as the unchecked burning of fossil fuels, is altering weather patterns.