A ruling by the UN that says governments cannot return people to countries where their lives might be threatened by climate change could be a real game-changer. 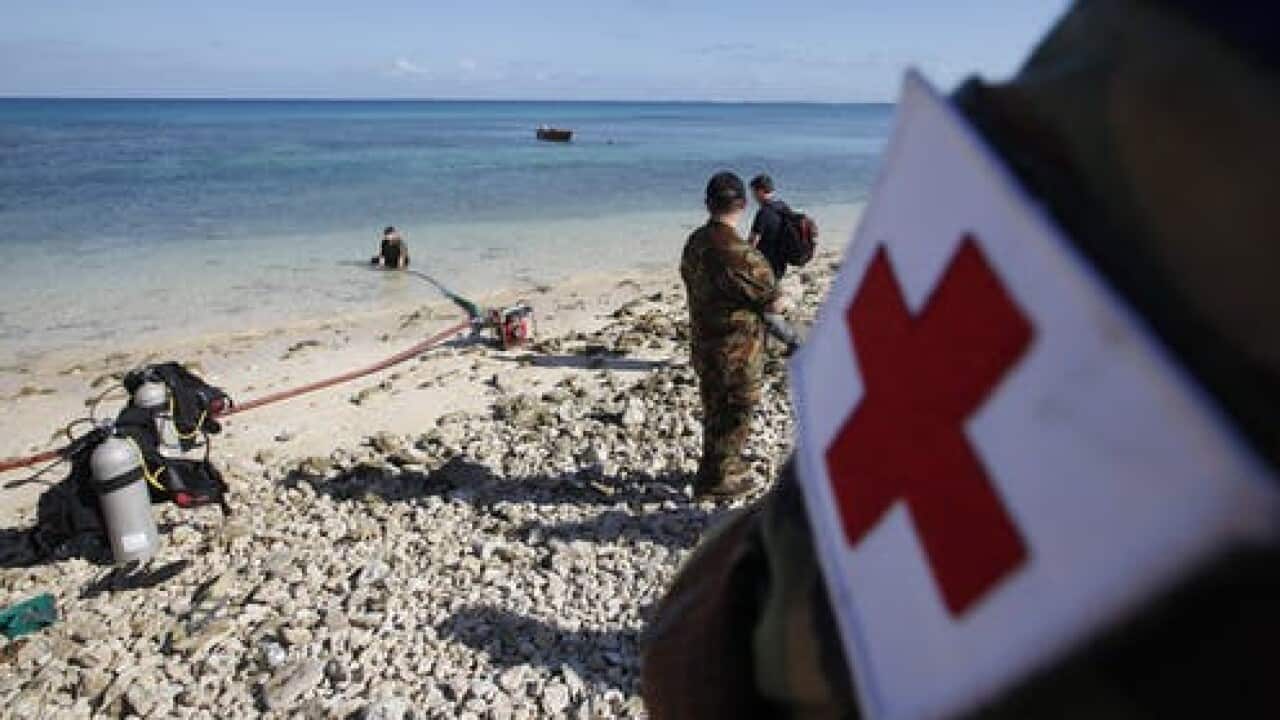 In this October 2011 photo, members of the Royal New Zealand defense force pump sea water into holding tanks ready to be used by the desalination plant. Source: AP Photo/Alastair Grant

The recent ruling by the United Nations that governments cannot return people to countries where their lives might be threatened by climate change is a potential game-changer — not just for climate refugees, but also for global climate action.

The UN Human Rights Committee’s landmark ruling made clear that “without robust national and international efforts, the effects of climate change in receiving states may expose individuals to violations of their rights … thereby triggering the non-refoulment obligations of sending states.”

The ruling elaborates further to say:

Given the risk of an entire country becoming submerged under water is such an extreme risk, the conditions of life in such a country may become incompatible with the right to life with dignity before the risk is realised.

The judgment relates to the case of Ioane Teitiota, a man from the Pacific island of Kiribati.

In 2015, Teitiota applied for protection from New Zealand after arguing his life and his family members’ lives were at risk due to the effects of climate change and sea-level rise.

The South Pacific atoll Kiribati is seen in an aerial view. There are fears that climate change could wipe out their entire Pacific archipelago. AP Photo/Richard Vogel

The Republic of Kiribati is considered one of the countries most at risk of being rendered uninhabitable by rising sea levels. The UN committee ruled, however, that in the time that might happen — 10 to 15 years — there could be “intervening acts by the Republic of Kiribati, with the assistance of the international community, to take affirmative measures to protect and, where necessary, relocate its population.”

As a result, the committee ruled against Teitiota on the basis that his life was not at imminent risk.

Teitiota did not become the world’s first climate refugee, but the committee’s ruling essentially recognised that climate refugees do exist, a first for the UN body. The ruling acknowledges a legal basis for refugee protection for those whose lives are imminently threatened by climate change.

For several decades, academics and policy-makers alike have debated the existence of climate refugees, with many asserting that because migration can be fuelled by many factors, climate change cannot be singled out as the sole driver of any movement.

However, with the acceleration of the climate crisis over the last 10 years, people are increasingly being displaced by disasters, desertification and coastal erosion linked to climate change.

In this October 2015 photo, young children of a family that relocated from a drought area gather at their home in northwestern China. AP Photo/Ng Han Guan

The UN High Commissioner for Refugees, Filippo Grandi, confirmed that the recent ruling means those displaced by climate change should be treated like refugees by recipient countries. Grandi noted:

The ruling says if you have an immediate threat to your life due to climate change, due to the climate emergency, and if you cross the border and go to another country, you should not be sent back because you would be at risk of your life, just like in a war or in a situation of persecution.

Grandi and some media commentators have predicted the ruling may open the door to surges of legal claims by displaced people globally. But the burden of proof that someone’s life is under imminent threat by climate change remains high.

Teitiota’s case is a good example. Despite his arguments that sea-level rise, overpopulation and salt-water intrusion were threatening his life and the lives of his family, the New Zealand court and the UN Human Rights Committee ruled against him, saying he could not prove that his life was in imminent danger.

Floodgates not open yet

And so while this latest UN ruling is a momentous first step in international law, it by no means opens the floodgates to surges of climate refugees.

But it does represent a win for global climate action. It’s not legally binding, but it illustrates to governments around the world that climate change will have an increasing impact on their legal obligations under international law. This is great news for citizens and governments of small island states who have long pushed for climate action but have been met with delays and rejections.

For example, during last year’s Pacific Island Forum that brings together 16 Pacific island nations, as well as Australia and New Zealand, the 16 islands put forward the Tuvalu Declaration to ask for more action on climate change.

But sections of the original declaration were struck down due to reservations from Australia and New Zealand. Australia reportedly had concerns about emissions reductions, coal use and funding for the UN’s Green Climate Fund, while New Zealand also expressed concern about the fund.

Fijian Prime Minister Frank Bainimarama criticized the final declaration, tweeting: “We came together in a nation that risks disappearing to the seas, but unfortunately, we settled for the status quo in our communique.”

Ironically, following bushfires that recently raged across Australia and displaced thousands, concerns have arisen that Australia will soon have to deal with its own climate refugees.

The pressure is mounting for world leaders to take serious climate action to aggressively curb greenhouse gas emissions. The latest UN ruling is step towards improving the lives of those most vulnerable and affected by climate change.

Yvonne Su does not work for, consult, own shares in or receive funding from any company or organisation that would benefit from this article, and has disclosed no relevant affiliations beyond their academic appointment.