Unaccompanied minors among those evacuated from Afghanistan on Australian rescue flights

Home Affairs Minister Karen Andrews confirmed on Wednesday that less than 10 unaccompanied minors are in Australia, all who are believed to be aged over 10 years old. 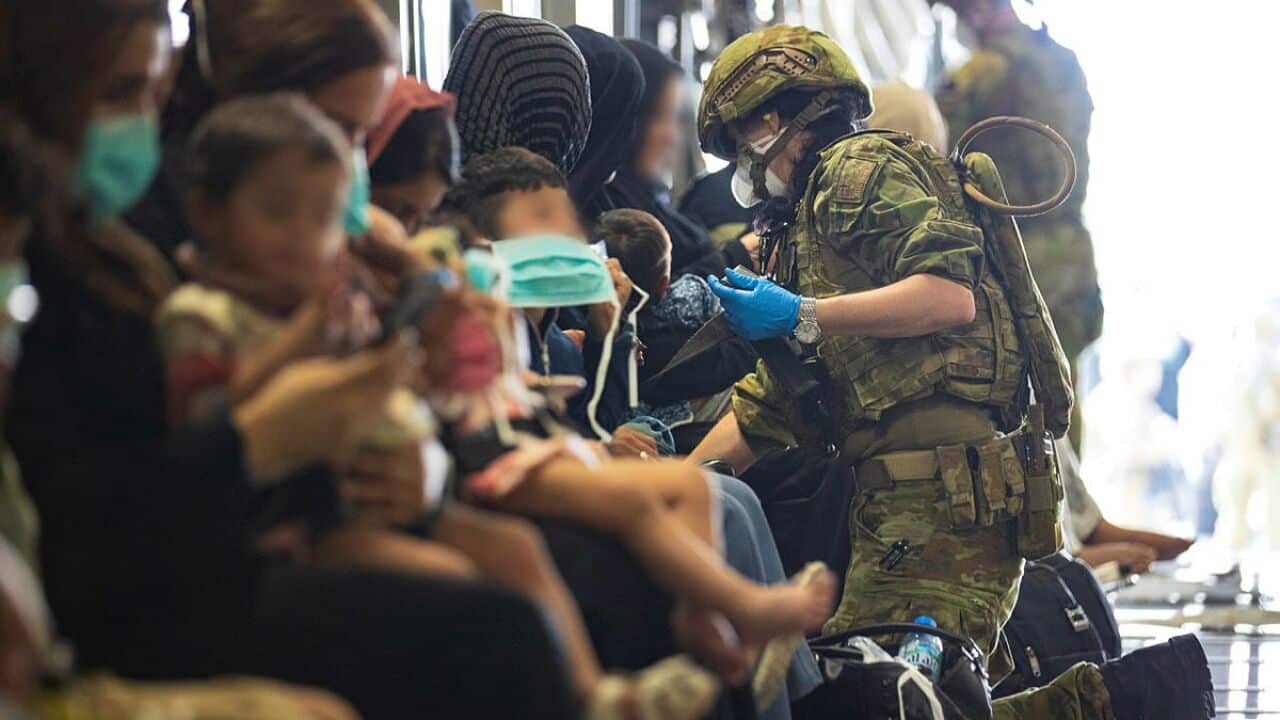 An Australian rescue flight prior to evacuation from Kabul. Source: Department of Defence

Unaccompanied children were among those who were evacuated from Afghanistan's capital on Australian rescue flights, the federal government has confirmed.

Home Affairs Minister Karen Andrews said on Wednesday that less than 10 minors are currently in Australia, all who are believed to be aged over 10 years old.

“We all witnessed the scenes in Afghanistan where people - adults were passing their children through the gates,” she told reporters.

Advertisement
“There are some unaccompanied minors here in Australia at the moment who are being well cared for. We will continue to do that and there will be others that come into our country over coming days.”

Australian forces airlifted around 4,100 people out of Afghanistan as part of its evacuation mission, which ended last week.

The evacuees have been flown to the Al Minhad airport near Dubai for processing before coming to Australia to enter hotel quarantine.

It is not known how many Australian citizens and visa holders remain in the country, but options for leaving are now limited.

Ms Andrews said the number of applications from people seeking to come to Australia is increasing on a daily basis, including through representations from evacuees on behalf of other family members.

“We are on a daily basis receiving further applications from people who wish to come here to Australia,” she said.

“We are not prepared to give any details that would potentially lead to a security issue for those individuals,” she said. "I think it is important that we understand that the environment in Afghanistan remains critical. The terrorist threat is alarmingly high and there are threatened attacks.”

The Australian government has joined calls urging people
wanting to flee the Taliban to be guaranteed safe passage out of Afghanistan.

But it is unclear when options for commercial travel could recommence in Afghanistan, with Taliban forces seizing control of the capital's Hamid Karzai International Airport following the exit of US troops.

READ MORE
'What will happen to them?': Australians worried for loved ones left behind in Afghanistan

Ms Andrews said Australia continued to work with allies and international agencies around opportunities for people to exit Afghanistan.

“We are looking at what the opportunities are to allow people to come here through our humanitarian program,” she said. “Of course those people who are Australian citizens seeking to come here, we will do whatever we can to support them.”

The Taliban has offered assurances all foreign nationals and Afghan citizens with travel authorisation will be permitted to safely exit.

US President Joe Biden has said the world will hold the Taliban to this commitment.