Under 'oath to protect': Why is UN peacekeeper abuse still a problem?

The UN has announced it will withdraw Republic of Congo peacekeeping soldiers from the Central African Republic over sexual abuse allegations. Why do incidents like this keep happening and will it stop? 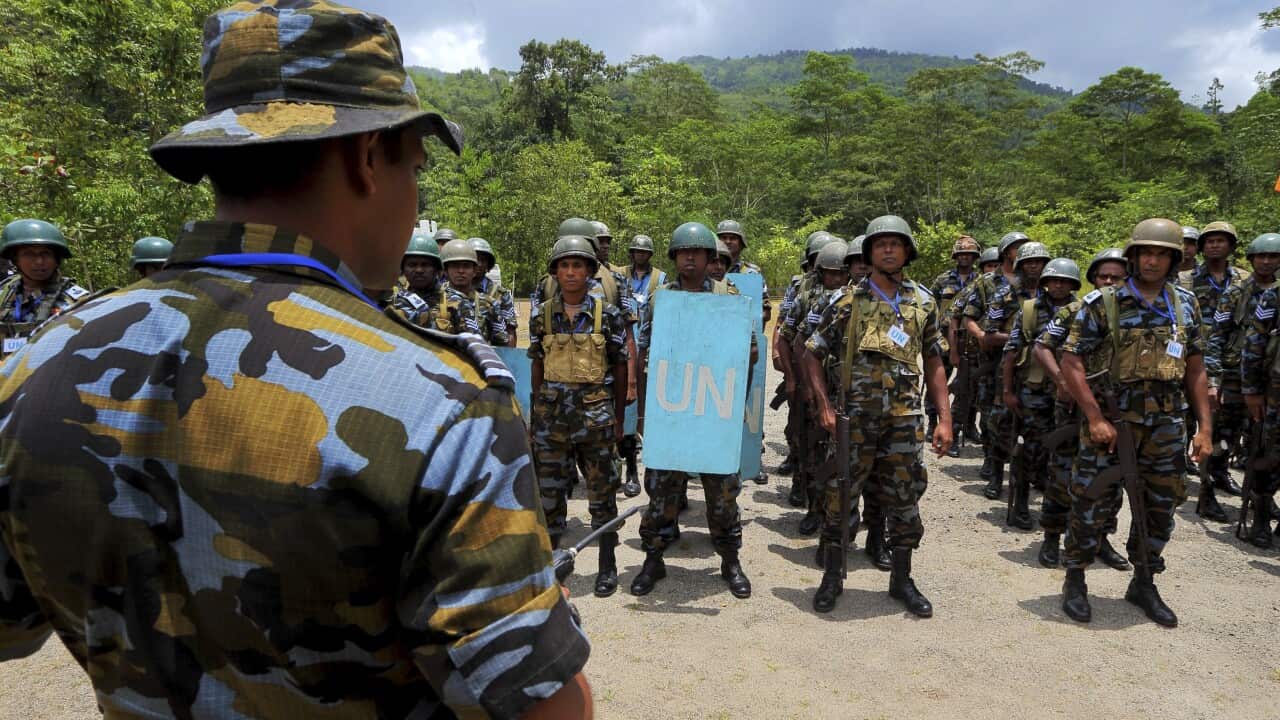 Just days after the International Day for the Elimination of Sexual Violence, the UN has formally announced it will withdraw about 600 Republic of Congo peacekeeping troops from the Central African Republic amid allegations of sexual abuse.

In a statement a spokesperson for the UN announced the Republic of Congo would withdraw its troops from the UN's MINSUCA force in the Central African Republic following a review.

"The review of the deployment of uniformed military personnel from the Republic of Congo found that the nature and extent of existing allegations of sexual exploitation and abuse, in their totality, point to systemic problems in command and control," the spokesperson said.

Advertisement
"The Secretariat is working with the Republic of Congo and MINUSCA on the modalities for a speedy withdrawal that will have the least impact on the mission's operational requirements and ability to implement its mandate."

The spokesperson added the Republic of Congo's police contingent would remain, the review finding the military "failures" did not extend to the police.

The UN requested the Republic of Congo "urgently inform" it about accountability measures it would introduce to prevent soldiers committing sexual abuse.

"The horror of sexual violence is compounded when it is carried out by someone in uniform who has taken an oath to protect," Ms Jolie said.


The problem of UN peacekeepers committing sexual abuse has existed for decades.

It gained significant attention in 2004 when rights group Amnesty International
alleged
that UN and NATO officials had been customers of child prostitution in Kosovo.

In 2015, an internal UN study by Jordan's ambassador to the UN assembly, Prince Zeid Ra'ad Zeid al-Hussein, said abuse by peacekeepers was a widespread issue, occurring in countries from Haiti and Cambodia, to Bosnia and Sierra Leone.

In April 2017 an Associated Press
investigation
revealed there had been almost 2,000 allegations of sexual abuse by UN peacekeepers and other officials around the world.

It said more than one hundred UN peacekeepers had run a child sex ring in Haiti over 10 years and none were ever jailed.

Why hasn't peacekeeper abuse stopped yet?

Dr Eyal Mayroz from the University of Sydney's Department of Peace and Conflict Studies told SBS World News the UN does not have enough money to fund its own peacekeeping forces, relying on troops from contributing states.

This hinders its ability to secure well-trained soldiers and ensure proper vetting procedures.

"The UN has been traditionally taking soldiers from countries that are not known for their human rights record," Dr Mayroz says, citing
Sri Lankan peacekeepers in Haiti as an example
.

The countries are usually happy to oblige the UN mission requests for peacekeepers, as they receive money and intelligence, and their troops receive free training, he says.

Yet, when they are found to have committed abuse and are sent back to their countries, governments typically don't hold them to account.

Dr Sherif Elgebeily, the director of the Centre for the Study of International Peace and Security in London, told SBS World News this is because sexual abuse investigations are lengthy and costly.

He says it can also be difficult for the country of the soldier to obtain evidence during an investigation.

According to an AP investigation, some 150 allegations of abuse and exploitation were reported in Haiti between 2004 and 2016. Source: AAP

Can the UN stop peacekeeper abuse?

Dr Elgebeily says if the UN attempts to tighten its grip too much, states may begin considering whether it's worth sending personnel on peacekeeping missions.

"Any secretary-general knows there is a very precarious balance between cracking down on sexual abuse or exploitation by peacekeepers and the risk of chasing away troop-contributing countries," he says.

What about the Security Council?

The problem for the UN is that it does not have jurisdiction over troop-contributing countries.

Despite this, the
Security Council
, which approves the mandate of peacekeeping missions, has attempted to stop the abuse.

In 2005, following several peacekeeper sexual abuse or exploitation scandals, a zero-tolerance policy on sexual exploitation was incorporated into mandates authorised by the Security Council in Haiti and Sudan.

But this has since ceased, says Dr Elgebeily.

"Specific provisions must be inserted in all mandates - both at the outset and upon renewal, which usually happens every six months. This places an obligation upon states to ensure their personnel maintain a clear standard."

He also calls for the UN Security Council to be more proactive about its mandates.

"Reports that are presented to the Security Council are often not acted upon, despite the great number of tools at its discretion," he says.

Ban Ki-moon has labelled Australia's current target of reducing emissions between 26 and 28 per cent on 2005 levels by 2030 insufficient. Source: SBS / , The United Nations

What can the home countries do?

Of the 21 substantiated cases since 2015, less than half of offenders received any jail time and six were either dismissed or administratively reprimanded.

"It's not as simple as the UN just investigating. Troop-contributing countries have to also play their part in bringing cases to trial, gathering evidence, and prosecuting."

Without this, soldiers will "continue to benefit from crimes with impunity due to a combination of the legal lacuna in which they fall and unwillingness to fully prosecute perpetrators".

"Troop-contributing countries must certify that their troops have not been accused or prosecuted of violating international human or humanitarian law, but not specifically rape - which is a criminal offence under domestic law."

He also suggests approaches to prevent sexual abuse or exploitation by troops must begin not at the point of call or deployment, but "far earlier and on a regular basis at the domestic level".

"One cannot deny the disparity between attitudes towards rape across the globe, yet troops are placed side-by-side and expected to maintain a united moral standard, which is unrealistic."

In this picture taken 2011, surrounded by relatives, an 18-year-old man who claims he was sexually abused by Uruguayan peacekeepers lies on his bed in Haiti. Source: AP

Should the UN be held responsible over peacekeeper abuse?

One of the biggest scandals of the UN involved whistleblower and Office of the United Nations High Commissioner for Human Rights field operations director Anders Kompass.

Kompass believed the UN had failed to act on a confidential report about allegations that French peacekeepers sexually abused children in the Central African Republic, so he passed it on to French authorities in 2014.

The UN Office for Internal Oversight Services launched an investigation into Kompass' handling of the issue and suspended him.

It found UN agencies' response to the allegations was a "gross institutional failure", and both the internal investigation and the independent panel exonerated Kompass.

The UN is a member organisation, run by states and subject to its own authority.

"No one state can hold accountable the UN," says Dr Elgebeily.

"This is the perennial problem with any UN reform - it must come from within and change is both slow and difficult."

However, Dr Elgebeily says both former UN Secretary-General Ban Ki-moon and incumbent Antonio Guterres have shown they are willing to step up not only rhetoric but action to clamp down on abuse.

In 2016, Ban called for courts-martials to be held on missions where abuse was alleged to have occurred, and Guterres has this week announced he would repatriate Republic of Congo troops from the Central African Republic over abuse allegations.