The coronavirus pandemic has seen humanitarian needs balloon around the world with 235 million to require help in 2021, the United Nations says. 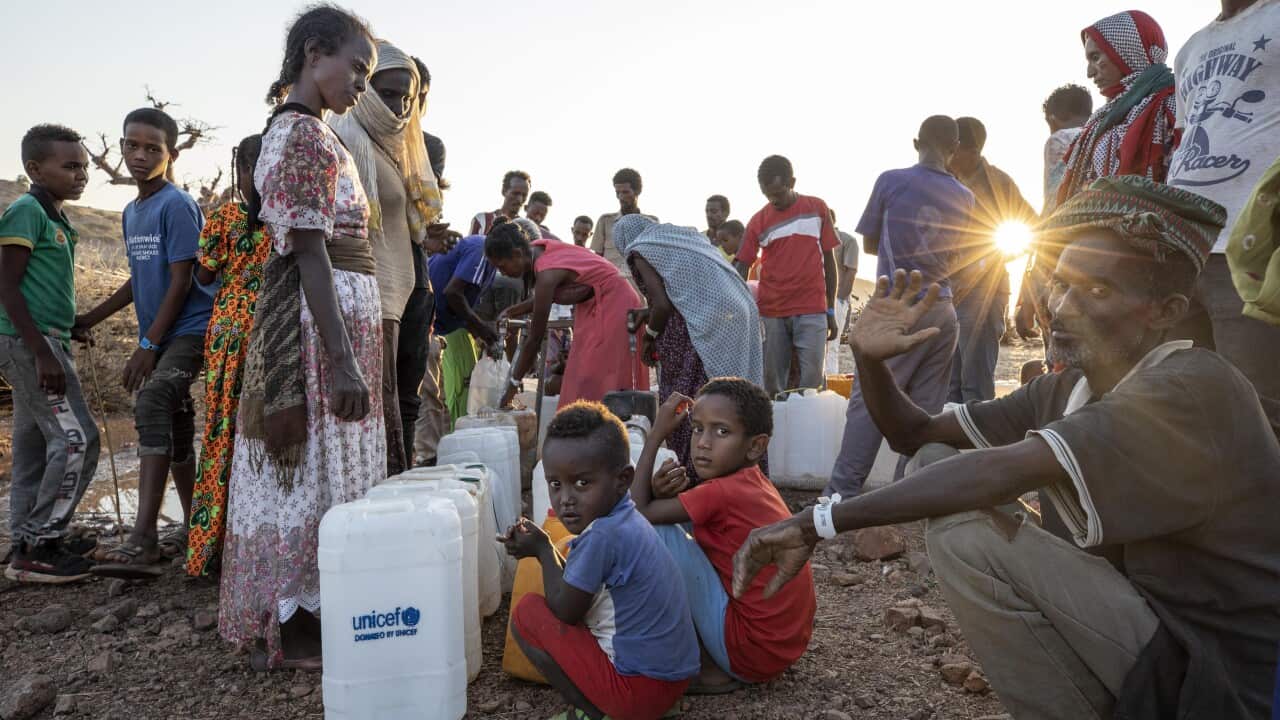 Women and men who fled the conflict in Ethiopia's Tigray region, wait to pour water into gallons, at Umm Rakouba refugee camp in eastern Sudan on 27 November. Source: AAP

The UN humanitarian office says needs for assistance have ballooned to unprecedented levels this year because of COVID-19, projecting that a staggering 235 million people will require help in 2021.

This comes as a result of the coronavirus pandemic and global challenges including conflicts, forced migration and the impact of global warming.

The UN Office for the Coordination of Humanitarian Affairs (OCHA) expects a 40 per cent increase in the number of people in need of such assistance in 2021 compared to this year - a sign that pain, suffering and torment brought by the coronavirus outbreak and other problems could get worse even if hopes of a vaccine are rising.

Advertisement
READ MORE
More than 40,000 Ethiopians have fled into Sudan to escape the deepening Tigray crisis

OCHA made the projections in its latest annual Global Humanitarian Overview on Tuesday, saying its hopes to reach 160 million of those people in need will cost $A47 billion.

That's more than twice the record $A23 billion that donors have provided for the international humanitarian response so far this year - and a target figure that is almost certain to go unmet.

"The picture we're painting this year is the bleakest and darkest perspective on humanitarian needs we've ever set out, and that's because the pandemic has reaped carnage across the most fragile and vulnerable countries on the planet," said UN humanitarian chief Mark Lowcock, who heads OCHA.

"For the first time since the 1990s, extreme poverty is going to increase, life expectancy will fall, the annual death toll from HIV, tuberculosis and malaria is set to double," he said. "We fear a near doubling in the number of people facing starvation."

Mr Lowcock told a UN briefing in New York on the overview that he thinks the UN appeal will probably raise a record $A27 billion by the end of the year - $A2.7 billion more than last year.

But he said the gap between needs and funding is growing and the UN is looking to "new players" coming on the scene in 2021, including US President-elect Joe Biden's new administration.

The UN aims to reach about two-thirds of those in need, with the Red Cross and other humanitarian organisations trying to meet the rest, Mr Lowcock explained.

UN Secretary-General Antonio Guterres said humanitarian aid budgets are now facing dire shortfalls as the impact of the COVID-19 pandemic continues to worsen, and said extreme poverty has risen for the first time in more than a generation.

"The lives of people in every nation and corner of the world have been upended by the impact of the pandemic," he said.

Mr Lowcock said the biggest problem is in Yemen where there is danger of "a large-scale famine" now, saying a prime reason is lack of funding from Gulf countries that were major donors in the past which has led to cuts in aid and the closing of clinics.

He said the biggest financial request is for the Syrian crisis and its spillover to neighbouring countries where millions of Syrians have fled to escape the more than nine-year conflict.

OCHA said other countries in need include Afghanistan, Congo, Haiti, Nigeria, South Sudan, Ukraine and Venezuela. Newcomers to this year's list are Mozambique, where extremist activity has increased in the north, Pakistan and Zimbabwe.

Mr Lowcock said it's not the pandemic, but its economic impact that's having the greatest effect on humanitarian needs.