US Secretary of State Mike Pompeo has abruptly shelved plans to meet a top North Korean official in New York, the latest twist in diplomatic attempts to secure a potentially landmark peace deal. 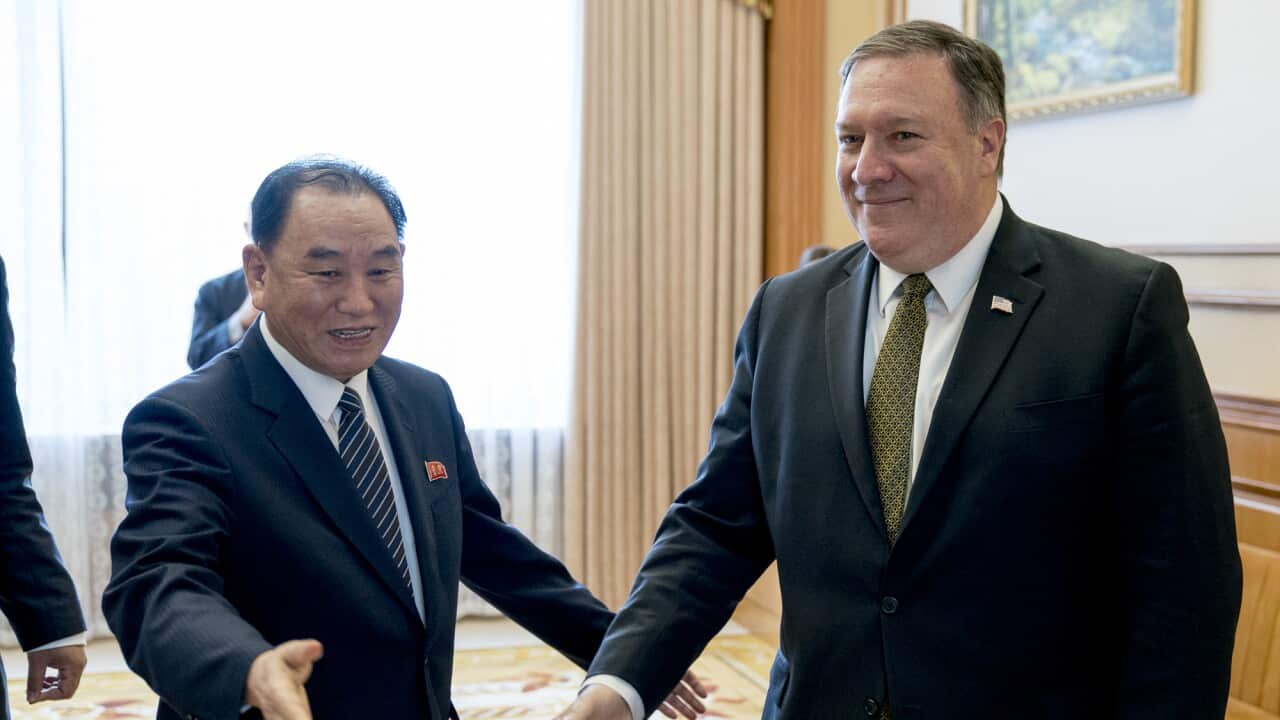 Talks between President Donald Trump's top diplomat and the North Korean delegation, which had been due on Thursday, "will now take place at a later date," State Department spokeswoman Heather Nauert said.

"We will reconvene when our respective schedules permit," she added in a statement.

State Department officials gave no further reasons for the delay to the meeting, although North Korea has stepped up its demands that the United States lift sanctions.

Advertisement
The State Department had just one day earlier confirmed that US Secretary of State Mike Pompeo would meet in New York with Kim Yong Chol -- one of the North Korean leader's right-hand men -- to discuss progress toward a denuclearization pact and to work to arrange a second summit following historic talks between Trump and Kim in June.

Despite warm words from President Trump since meeting Kim in Singapore, his administration has insisted on maintaining pressure on Pyongyang until a final agreement is reached.

"The improvement of relations and sanctions are incompatible," said a statement carried by the official Korean Central News Agency.

"What remains to be done is the US corresponding reply," it added.

Pompeo, speaking Sunday on Fox News, said he was "not worried" about the North Korean demands and insisted there would be "no economic relief until we have achieved our ultimate objective."

But Yang Moo-jin, a professor at the University of North Korean Studies in Seoul, told AFP that the postponement was a bad sign.

"This last-minute announcement of a delay is not a good signal as it indicates negotiations were not going well enough to go ahead with the planned meeting," he said.

Mr Pompeo has traveled four times this year to North Korea, for decades a US pariah, in hopes of securing an accord.

The diplomacy comes a year after fears mounted of war, with Trump threatening "fire and fury" after Pyongyang's nuclear and missile tests.

President Trump has cast North Korea as a crowning diplomatic achievement and is eager for a fresh summit with Kim at which the two may formally declare an end to the 1950-53 Korean War.

North Korea has long sought US recognition as a nuclear state and guarantees for the survival of the generational Kim regime, which human rights groups consider one of the most repressive in the world.

US critics say that North Korea has yet to make any concrete concessions and it has rejected demands for what it described as its "unilateral disarmament".

Mr Pompeo's postponement of talks came amid emerging differences between Seoul and Washington, which stations 28,500 troops in the South to protect it from its nuclear-armed neighbour.

In contrast to Washington's approach, the South's dovish president Moon Jae-in, who brokered the Singapore summit, has dangled large investment and joint cross-border projects as incentives for steps towards denuclearisation.

"There have been cases in the past when US-North Korea talks were delayed, so there is no need to shift between hope and fear," a senior ministry official told reporters.

Kim Yong Chol is a general and former top intelligence chief. He visited New York in May for talks with Pompeo in what was the highest-level trip by a North Korean to the United States in nearly two decades.

The diplomacy on North Korea has seen a series of fits and starts, with Trump at one point scrapping a trip by Mr Pompeo just as he was set to fly to Pyongyang.

The latest New York meeting was set to come ahead of a busy season of diplomacy, with Pompeo meeting senior Chinese officials in Washington on Friday.

President Trump heads over the next month to international gatherings in Paris and Buenos Aires, while Vice President Mike Pence will tour Asia.