The United States has announced sanctions on senior Russian government officials and Russian entities in response to what US officials said was Moscow’s attempt to kill opposition leader Alexei Navalny with a nerve agent. 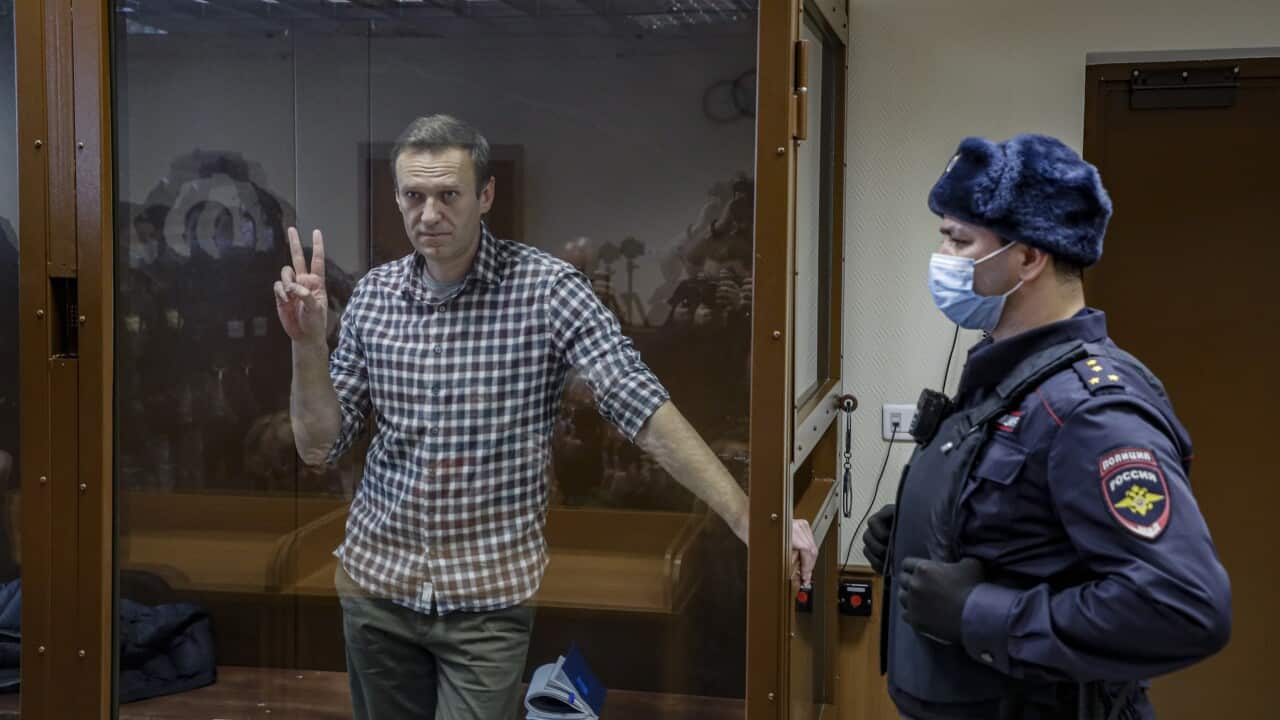 Russian opposition leader Alexei Navalny gestures inside a glass cage prior to a hearing at the Babushkinsky District Court in Moscow, Russia, 20 February 2021. Source: AAP

The United States on Tuesday imposed sanctions on seven senior Russian officials as it said its intelligence concluded that Moscow orchestrated the near fatal poisoning of jailed Kremlin critic Alexei Navalny.

In action coordinated with the European Union, President Joe Biden's administration renewed demands that Russia free Mr Navalny, who has been sent to a notorious penal colony after spurring massive rallies through his allegations of corruption by President Vladimir Putin.

Officials said that the United States would impose sanctions on "seven senior members of the Russian government" with the details expected to be released later on Tuesday local time.

The announcement comes one day after EU member states approved sanctions on a partly overlapping list of four senior Russian justice and law enforcement officials involved in his detention.

The targeted Russians will be restricted from traveling either to the European Union or the United States, with any assets in the Western nations frozen.

The Biden administration said it will also restrict certain exports to Russia as it vowed a harder line than defeated president Donald Trump, who voiced admiration for Putin.

"We will take the appropriate actions as we see fit to make very clear that this kind of conduct is unacceptable for us, and we'll do it with our allies and partners," Secretary of State Antony Blinken said in an interview released Tuesday.

The Kremlin earlier on Tuesday denounced moves to impose sanctions.

"Those who continue to depend on these measures should probably give it some thought: are they achieving some goal by continuing such a policy?" Kremlin spokesman Dmitry Peskov said.

"The answer will be obvious: such a policy does not achieve its goals."

The Biden administration has vowed a clear-eyed view on Russia without either Mr Trump's sweet spot for Mr Putin or former president Barack Obama's initial attempt to "reset" relations.

Officials said that the United States would in the coming weeks also roll out intelligence assessments on other points of concern with Russia.

The rows include allegations that Russia paid Taliban-linked militants bounties to kill US troops in Afghanistan, and early indications that Moscow was behind the massive SolarWinds hack that devastated US agencies and businesses.

The arrest of opposition political leader Alexei Navalny has seen his supporters take to the streets in protest like here in Nizhny Novgorod. Source: AAP

Mr Navalny, 44, fell violently ill when he was taking a domestic flight.

He was rushed to treatment in Germany where doctors said he had been poisoned with Novichok, a nerve agent developed by Soviet researchers and which was also blamed in a 2018 attack in England against Russian double-agent Sergei Skripal and his daughter Yulia.

After recuperating, Mr Navalny defiantly returned to Moscow in January and was immediately arrested.

He was sent to the penal colony east of the Russian capital as a judge ruled that while in Germany he violated terms of parole in a suspended sentence over a 2014 fraud case, which critics say was trumped up.

Mr Navalny has persisted in needling Mr Putin, releasing a viral video that purported to show a palatial Black Sea residence belonging to the president, who was forced to deny publicly that it was his.

The dissident has also mockingly said that the veteran Russian leader "will go down in history as a poisoner of underpants" - where agents allegedly placed the Novichok.