The US has passed six million coronavirus cases as the WHO says it is possible to balance the opening up of economies while continuing to suppress transmission of the coronavirus. 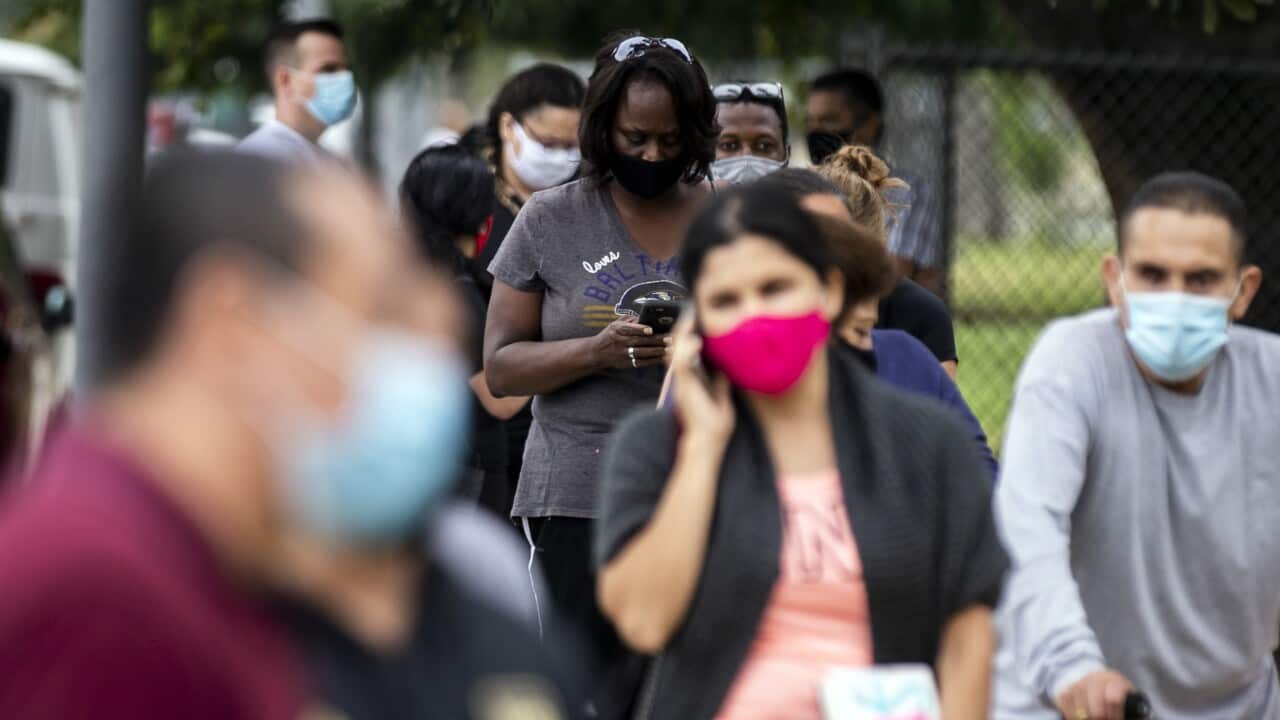 People wait in line to be tested for COVID-19 at a drive-in and walk up testing site in Los Angeles, California, 1 July 2020. Source: AAP

The United States on Monday passed six million coronavirus cases, according to a tally kept by Johns Hopkins University, adding one million new infections in less than a month.

The country remains by far the most impacted in the world by the pandemic in absolute terms, with nearly a quarter of global infections and 183,203 deaths from Covid-19, the Baltimore-based university's tracker showed.

The number of new daily cases has declined in recent weeks, but the virus is far from disappearing in the US - despite President Donald Trump's repeated assertion that it will -and the national average hides huge regional disparities.

The US charted its five millionth case on 9 August. That was just 17 days after it hit four million.

Global coronavirus infections have soared past 25 million, as countries tightened restrictions to halt the health crisis that has upended life for most of humanity.

A million additional cases have been detected globally roughly every four days since mid-July, according to an AFP tally, with India on Sunday setting the record for the highest single-day rise in cases with 78,761.

Demonstrators march during a protest against coronavirus pandemic regulations in front of the Brandenburg Gate in Berlin, Germany. Source: AAP

It comes as the head of the World Health Organisation is warning that opening up societies too quickly amid the coronavirus pandemic is a "recipe for disaster".

WHO Director-General Tedros Adhanom Ghebreyesus advises that "the more control countries have over the virus, the more they can open up," and insists that countries that are serious about opening up must also be serious about suppressing transmission.

"This may seem like an impossible balance but it's not," he told reporters in Geneva.

Dr Tedros cited four key points that countries, communities and individuals should focus on: preventing "amplifying events" - as the virus thrives on clusters; protecting vulnerable groups; people taking steps individually to protect themselves; and finding, isolating, testing and caring for cases, while tracing and quarantining their contacts.

The WHO also noted on Monday that 90 per cent of countries that responded in a survey reported fallout from COVID-19 on the provision of other health care services.

Dr Tedros said 105 countries responded to the survey aimed at assessing the impact of the coronavirus outbreak on strained health systems.

The survey, covering five regions between March and June, exposed "cracks in our health systems" and the need for better preparation for health emergencies like the pandemic that has produced more than 25 million confirmed cases and killed more than 843,000 people by the WHO's count, Dr Tedros said.

The survey results indicated that routine immunisation and outreach services were among the most affected, with 70 per cent of countries reporting disruptions followed closely by the diagnosis and treatment of non-communicable diseases like cardiovascular disease and cancer.

Nearly a quarter of countries that responded reported disruptions to emergency services.

WHO cautioned about some limitations about the study, including that it involved "self-assessment," as well as differences in the phases of the outbreak that countries were experiencing.