The US will help Australia if it faces economic coercion from China, US Secretary of State Antony Blinken says. 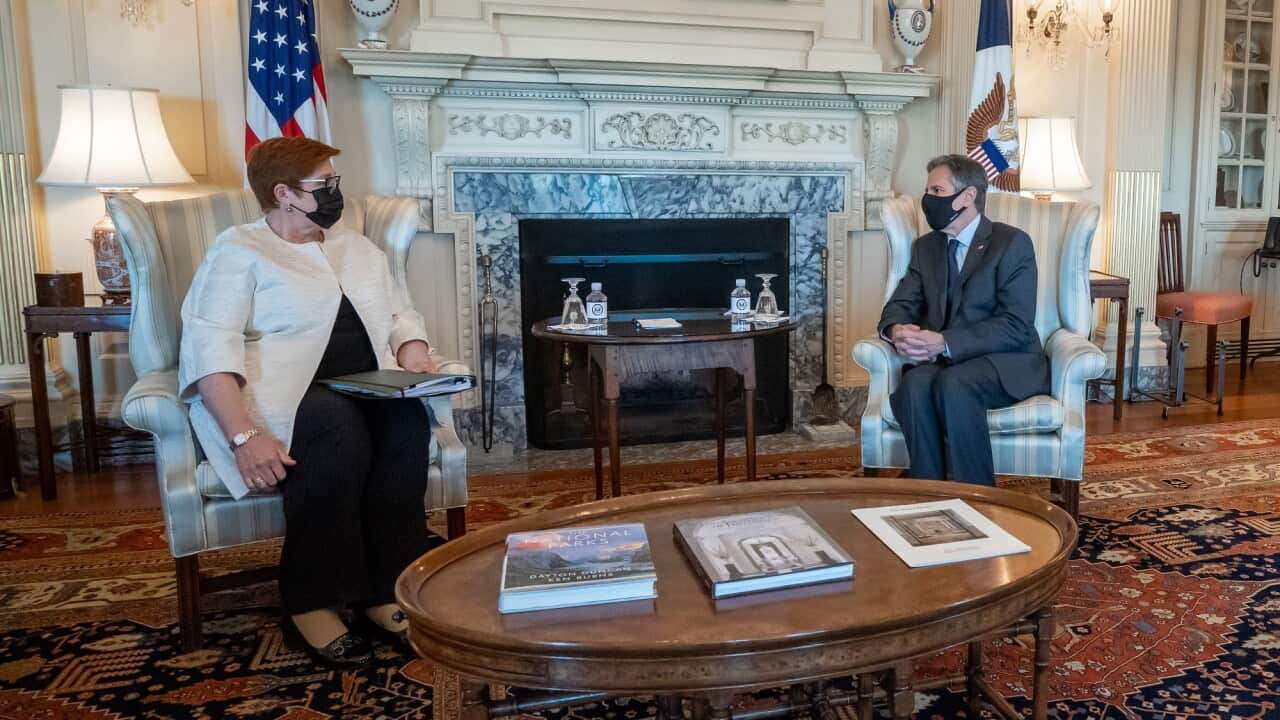 US Secretary of State Antony Blinken says the United States will not leave Australia alone "in the face of economic coercion by China", and that such behaviour toward US allies will hamper improvement in US-Sino relations.

Washington has repeatedly criticised what it says are Beijing's attempts to bully neighbours with competing interests, and US President Joe Biden has sought to bolster ties with allies in the Indo-Pacific to counter China's growing power.

"I reiterated that the United States will not leave Australia alone on the field, or maybe I should say alone on the pitch, in the face of economic coercion by China," Mr Blinken said at a press briefing with Australia's visiting Foreign Minister Marise Payne.

"And we've made clear to (China) how such actions targeting our closest partners and allies will hinder improvements in our own relationship with China," he added.

China has imposed a series of trade sanctions on Australian exports ranging from wine to coal as tensions between the two countries have worsened in recent years.

US Secretary of State Blinken has voiced support for Australia in the face of pressure from China. Source: SBS / , Twitter/SecBlinken

Successive Australian trade ministers have been unable to secure a phone call with Chinese counterparts since diplomatic tensions worsened in 2020, and last week Beijing suspended all activity under a bilateral economic dialogue.

Australia was one of the first countries to publicly ban Chinese tech giant Huawei from its 5G network over security concerns, and last year angered Beijing with its calls for an independent investigation into the origins of COVID-19.

Ms Payne told journalists Australia had been clear that it wanted constructive ties with China.

"But we won't compromise on our national security or our sovereignty and we'll continue to act to protect that," she said.

Australia calls for more powers for WHO after COVID-19 report

Ms Payne used the press conference to call for increased powers for the World Health Organisation to investigate outbreaks, after
a major report initiated by the WHO
found that the declaration of a global emergency should have happened much earlier.

Australia has been in the firing line from China, its largest trading partner, over steps including backing US-led calls for a probe into COVID's origins, resulting in Beijing imposing tariffs on key products including wine and cutting off diplomatic and trade talks.

She pointed to recommendations "about increasing the independence and authority of the WHO so that they have explicit powers to investigate pathogens with pandemic potential and to publish information about those potential outbreaks with immediate action without prior approval of national governments".

"The independent panel is a very important one in terms of the way forward for ensuring that we avoid the experience that the world, this country, our country, so many countries have had to deal with in recent times and the extraordinary loss of life that it has caused," she said.

The panel, led by former Liberian president Ellen Johnson Sirleaf and former New Zealand prime minister Helen Clark, found that early responses to the outbreak in Wuhan, China in December 2019 "lacked urgency" and said the pandemic - which has killed at least 3.3 million people and devastated the global economy - was preventable.

Mr Blinken, speaking with Ms Payne, renewed US criticism of the original WHO investigation.

"The issue is less about assigning blame and more about understanding what happened so that we can take effective action for the future," Blinken said.

"There was a failure on the part of the PRC to allow timely access to international experts, timely sharing of information, real transparency when it mattered most," Blinken said of China.

President Joe Biden's administration, however, has reversed a decision by previous president Donald Trump to leave the WHO, pointing to plenty of positive work by the UN body and calling for efforts to improve it from within.