Michelle Brachelet is visiting China amid ongoing concerns over treatments of Uyghurs. 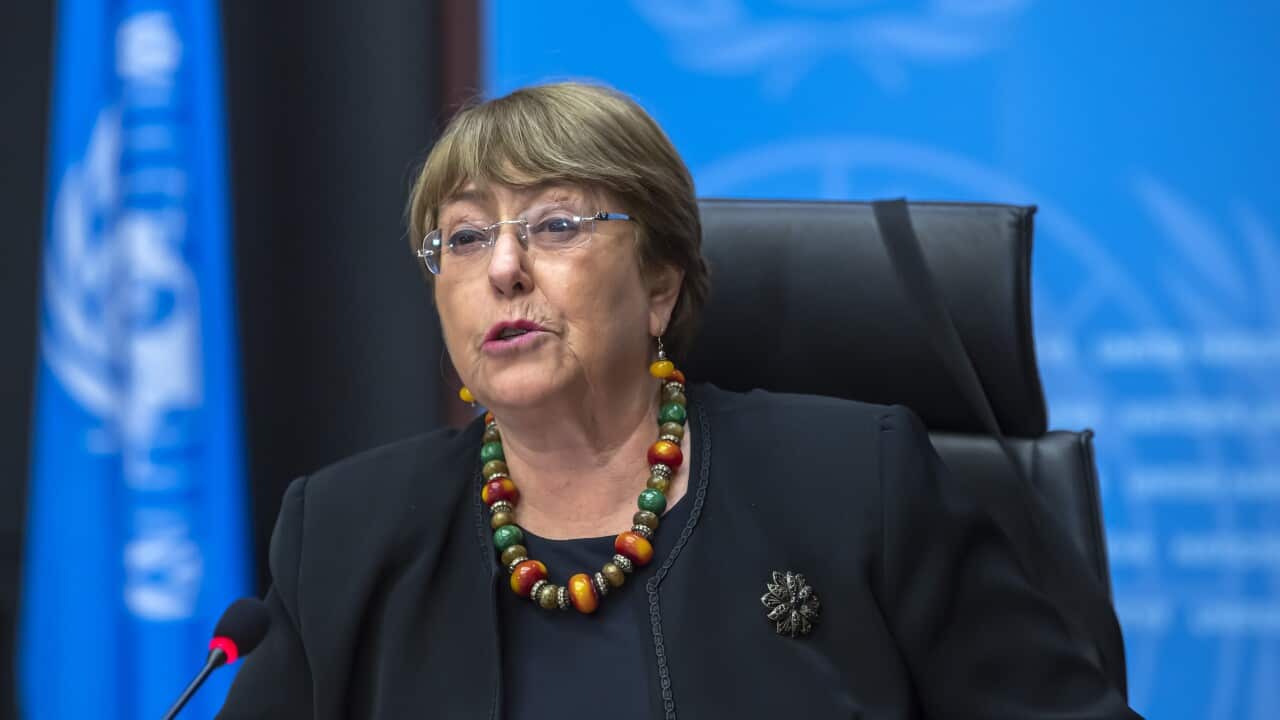 Uyghurs have urged United Nations human rights chief Michelle Bachelet to avoid falling victim to a public relations stunt as her trip to China enters a delicate new phase on Tuesday with a visit to the remote Xinjiang region.

The ruling Communist Party is accused of detaining over one million Uyghurs and other Muslim minorities in the far-western region as part of a years-long security crackdown the United States has labelled a "genocide".

China vehemently denies the allegations, calling them the "lie of the century".

Advertisement
Ms Bachelet is expected to visit the Xinjiang cities Urumqi and Kashgar on Tuesday and Wednesday as part of a six-day tour.

"I hope she can also ask the Chinese government for the whereabouts of my mother," said Jevlan Shirememet, adding that he had not been able to contact her in four years.

The Turkey-based 31-year-old - from the province's northern reaches near the border with Kazakhstan - also said he hoped Ms Bachelet would venture further than her itinerary.

"I don't know why she can't visit these places," he told AFP.

Nursimangul Abdureshid — another Uyghur living in Turkey — was "not very hopeful that her trip can bring any change".
READ MORE
Tens of thousands of Kazakhs are believed detained in China. The mother of three of them shares her anguish
"I request them to visit victims like my family members, not the pre-prepared scenes by the Chinese government," she told AFP.

"If the UN team cannot have unlimited access in Xinjiang, I will not accept their so-called reports."

Ms Bachelet arrived in China on Monday, kicking off the first trip by a holder of the office since 2005 amid concerns that it could lead to an endorsement rather than scrutiny of China's rights record.

The Chinese foreign ministry said it welcomed her but rejected "political manipulation" when asked by media if she can visit the detention centres, re-education camps and prisons where rights groups say Uyghurs have been mistreated.

China has repeatedly denied any mistreatment of Uyghurs.

"The purpose of the private visit is to enhance exchanges and cooperation between both sides and promote the international cause of human rights," ministry spokesman Wang Wenbin told a media briefing on Monday.
READ MORE
Parliamentary committee calls for stronger laws to curb 'grave human rights violation' of forced labour in Xinjiang
He said that Ms Bachelet's visit will be conducted in a "closed loop", referring to a way of isolating people within a "bubble" to prevent the COVID-19 virus from potentially spreading.

This means that Ms Bachelet will not be able to have free and spontaneous in-person meetings with anyone who has not been pre-arranged by China to be brought inside the "bubble".

Her office posted a photo of her on Twitter in a meeting room with Chinese officials including Foreign Minister Wang Yi and said: "We will be discussing sensitive, important human rights issues, and I hope this visit will help us work together to advance human rights in China and globally."
Mr Wang had earlier said the media would not be travelling with Ms Bachelet because of the coronavirus pandemic. Her office said there would be a press conference at the end.

The 23-28 May trip has been long in the making after Ms Bachelet said in 2018 she wanted unfettered access to Xinjiang. China said the visit should not be based on a presumption of guilt.

Some rights groups are worried that if Ms Bachelet does not press China hard enough, her post-trip report may not give a full picture and could be used by Beijing to justify its actions in Xinjiang.

The World Uyghur Congress urged Bachelet in a letter to ensure that her team can move freely, access all detention facilities and have unsupervised contact with Uighurs.

"We are concerned the trip might do more harm than good. China could use it for propaganda purposes," a Congress spokesperson Zumretay Arkin told Reuters.
China's Foreign Minister Wang Yi Source: AAP
International scrutiny of the government's actions in Xinjiang heightened in 2018 after the United Nations said one million Uyghurs were held in "massive internment camps" set up for political indoctrination.

China initially denied the existence of any camps, then later admitted it had set up "vocational training centres" with dormitories where people can "voluntarily" check themselves in to learn about law, Chinese language and vocational skills.

The atheist ruling Communist Party said such centres are necessary to curb the "Three Forces" of terrorism, separatism and religious radicalism in Xinjiang, which borders Central Asia on China's north-western frontier.