Victoria is making the public display of Nazi symbols illegal

The Victorian government is working on new laws to ban the public display of Nazi symbols, including the swastika, in what would be a national first. 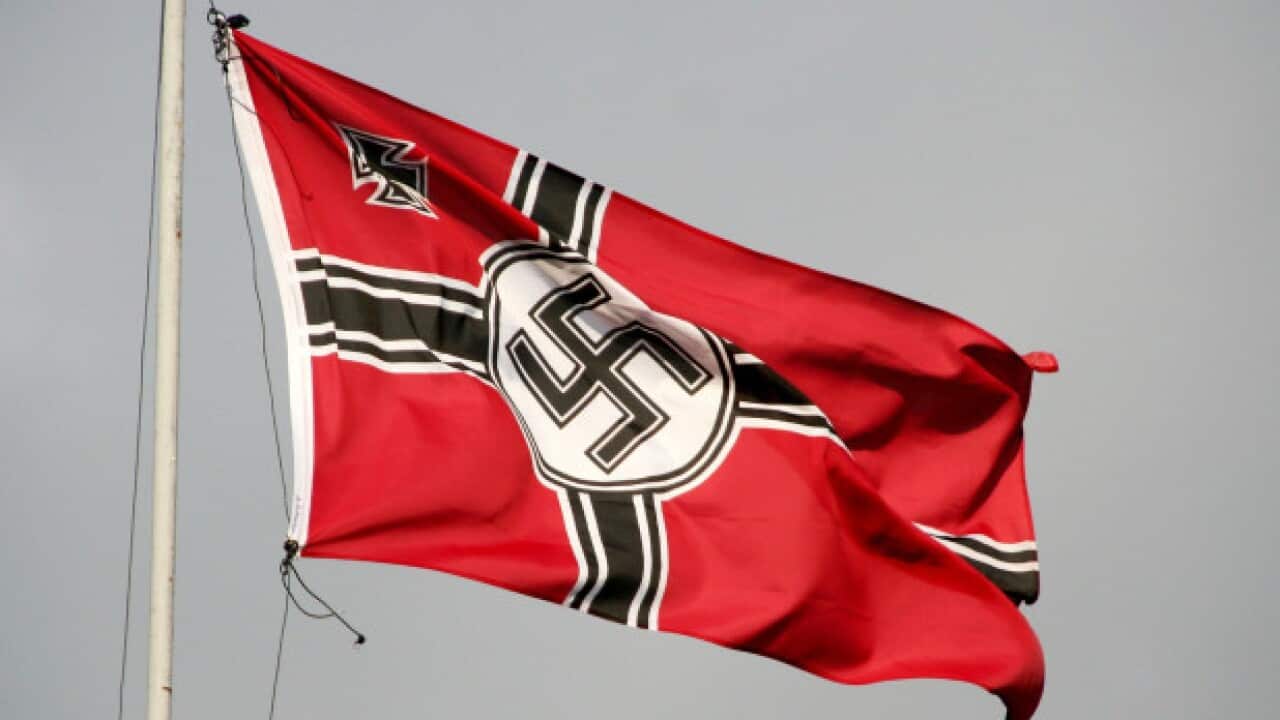 Victoria is set to make the public display of Nazi symbols illegal "in recognition of the rise in neo-Nazi activity and its role in inciting hate behaviour".

Australian state and territory-first legislation will be presented to parliament during the first half of next year, the state government announced on Thursday.

The government says it will also extend the state’s anti-vilification protections beyond race and religion to also cover sex, gender, sexual orientation, disability, and HIV/AIDS status.

Advertisement
It comes after a parliamentary committee earlier this year recommended the ban on Nazi symbols in public.

READ MORE
'Right a wrong': Calls for Nazi symbols to be outlawed across Australia as Victoria moves towards ban

The committee found significant and long-lasting impacts from the "all too common" occurrence of vilification for "many Victorians", particularly Indigenous residents, members of the LGBTIQ+ community members, people with disability and those from culturally diverse backgrounds.

“All forms of hate are unacceptable and have no place in Victoria – expanding our anti-vilification laws to protect more Victorians sends a clear message that this vile behaviour will not be tolerated,” Attorney-General Jaclyn Symes said in a statement.

Minister for Multicultural Affairs Ros Spence said Nazi symbols "glorify one of the most hateful ideologies in human history".

"We must confront hate, prevent it, and give it no space to grow," she said.

Ms Symes said consultation was being sought on how to draft the Nazi symbol legislation to allow for "appropriate exceptions ... such as for educational or historical purposes".

The Australian Jewish Association (AJA) welcomed the move to ban the public display of Nazi symbols.

"We support the banning of those symbols and what it represents," AJA President Dr David Adler said. "This was an ideology that attempted the mass murder of an entire people on an industrial scale."

He said there has been a steady increase in the use of Nazi symbols to intimidate members of the Jewish community, escalating to physical assaults, over the years - which has risen even more during the pandemic.

"We saw images being circulated on social media with Jews being blamed for spreading disease or characterised as vermin or various other ugly tropes," he said.

Dr Adler said he would like to see more far-reaching measures introduced, such as those implemented in the US and UK, including conditions attached to government funding and grants that parties agree to abstain from anti-Semitism.

"It (the Holocaust and references to the ideology of the time) does affect us personally. It is one of the darkest stains on human history. And we take very seriously the 'never again' lesson and we have to do everything we can to stamp out this type of bigotry," he said.

An alliance of Aboriginal, multicultural and multifaith groups, human rights, women’s and LGBTIQ+ rights organisations have also supported the steps taken by the Victorian government.

In a joint statement, the alliance said: "When someone is attacked, abused or demeaned simply because of who they are, they should not be left to stand alone. Our laws must ensure people who use hate to harm others are held to account for the harm they cause to people in our community."

The VALS said it hoped the ban would reduce vilification experienced by Indigenous Australians.

“Aboriginal communities are subjected to racial discrimination, systemic and structural exclusion on a daily basis," said Lee-Anne Carter from the VALS. "The Victorian government’s anti-vilification reforms come after a long fight by so many communities.”

The VALS has campaigned for legal changes after the experience of Gunditjmara elder Charmaine Clarke in 2019, who had attempted to bring a racial vilification case after she experienced racism in a café in her regional town.

She
told the Victorian parliamentary committee
: "I put myself through the effort to pursue justice, to call racism to account publicly in my small town, but like many other cases, it was to no avail. I was told by the police in March 2020, that I did not meet the threshold in their opinion".

In the 20 years since the Racial and Religious Tolerance Act became law in Victoria, there have been only two successful prosecutions, according to the committee's final report.