Aged care and disability support workers will be able to jump the queue at mass vaccination hubs in Victoria from Wednesday, as the state government embarks on a five-day "vaccine blitz". 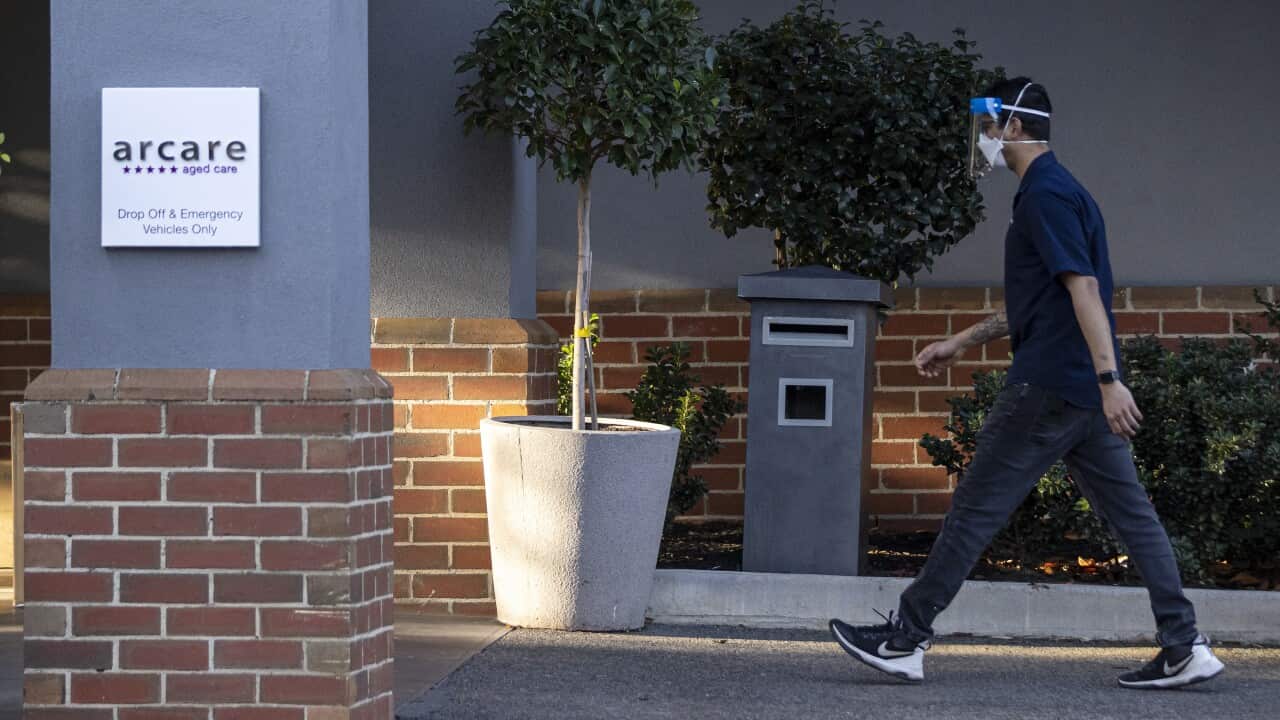 A staff member is seen entering Arcare aged care in Maidstone, Melbourne. The facility was locked down after two workers and a resident tested postive. Source: AAP

Victoria has recorded nine new community-transmitted COVID-19 cases, including six previously reported, from more than 42,000 tests as outrage continues after it was revealed the virus had
once again entered the state's aged care system
.

The new cases, announced on Tuesday, take the total number of infections linked to the outbreak to 54. Two of the new infections are close contacts of previously confirmed cases, while the third remains under investigation.

Meanwhile, NSW Health officials are tracing the movements of a potentially infectious COVID-19 case
who visited the Jervis Bay area from Melbourne on 23 and 24 May
.

Health authorities are facing an uphill battle to contain the virus, with more than 4,200 close contacts of positive cases and almost 330 potential exposure sites identified.

"There continues to be significant concerns around ongoing transmission, particularly in our northern suburbs  and [over] many large exposure sites," Victorian Health Minister Martin Foley told reporters on Tuesday.

"Our public health team are currently weighing whether there is still coronavirus circulating in these communities and we still consider our response to the current outbreak on a day by day basis."

There are particular concerns over four cases of "stranger-to-stranger" transmission, COVID-19 testing commander Jeroen Weimar said, referring to incidents where the virus was transmitted between people who were not in close contact.

"People are brushing past each other in a small shop, they are going to display homes, they are looking at phones in a Telstra shop," he said.

"This is very, relatively speaking, fleeting contact. They do not know each other's names, and that is very different from what we have seen before."

A seven-day "circuit breaker" lockdown across the state is currently scheduled to lift at midnight on Thursday.

From Wednesday to Sunday, workers from these vulnerable sectors will be able to jump the queue at walk-in vaccination hubs across the state amid concerns over the speed of the rollout.

"We have concerns there isn't enough coverage that is why we are stepping in," Victorian Minister for Disability, Ageing and Carers Luke Donnellan said. "This is very much a call-to-arms for workers on the frontline to come out".

Nine separate accessible vaccine facilities will be established for people with disability in residential care in response to "serious concerns" relating to disability sector rollout.

These will function as a direct link to major disability service providers, Mr Donnellan said, with residents able to elect to receive their vaccine off-site.

It was revealed on Thursday only 355 of the roughly 22,000 people in disability residential care across the country have been fully vaccinated.

Meanwhile, federal, state and territory leaders will consider this week whether to update advice on mandatory vaccines for aged care workers, after two employees and one 99-year-old resident at a Melbourne facility tested positive.

The Arcare Maidstone aged care facility was placed into lockdown on Sunday after the first worker, a woman in her 50s, tested positive. All other staff and residents have since tested negative.

A second Melbourne nursing home, Bluecross Sunshine aged care centre, was locked down a day later after it was revealed the second worker had recently worked across both facilities. No other positive cases have been connected to the facility.

Aged Care Minister Richard Colbeck said the policy was reintroduced on 27 May and would be extended if the hotspot declaration continues beyond two weeks.

The second infected aged care worker had worked at the Bluecross Sunshine centre from 26 to 28 May.

Senator Colbeck defended the decision to wait until Thursday to reintroduce the one-site policy, telling ABC Radio on Tuesday it was "illegal to inhibit how somebody earns a living, particularly someone who is working in casual circumstances".

The Victorian government has barred aged care workers from working across multiple public nursing homes, which are controlled by the state.

Asked on
Monday why the worker was working across multiple sites
, acting Victorian Premier James Merlino said it was a question for the federal government.

The total number of aged care workers who have received their first or second doses of the vaccine is unknown.

He added, however, that the total number was likely higher as staff members who accessed the vaccine through their GPs or hubs have not been required to disclose their profession.

"We will be requiring aged care providers to report that to us alongside their reporting of vaccination of the flu vaccine," he said.