Republican president-elect Donald Trump's supporters said the media was out of touch and that Trump was a winner. They were right. 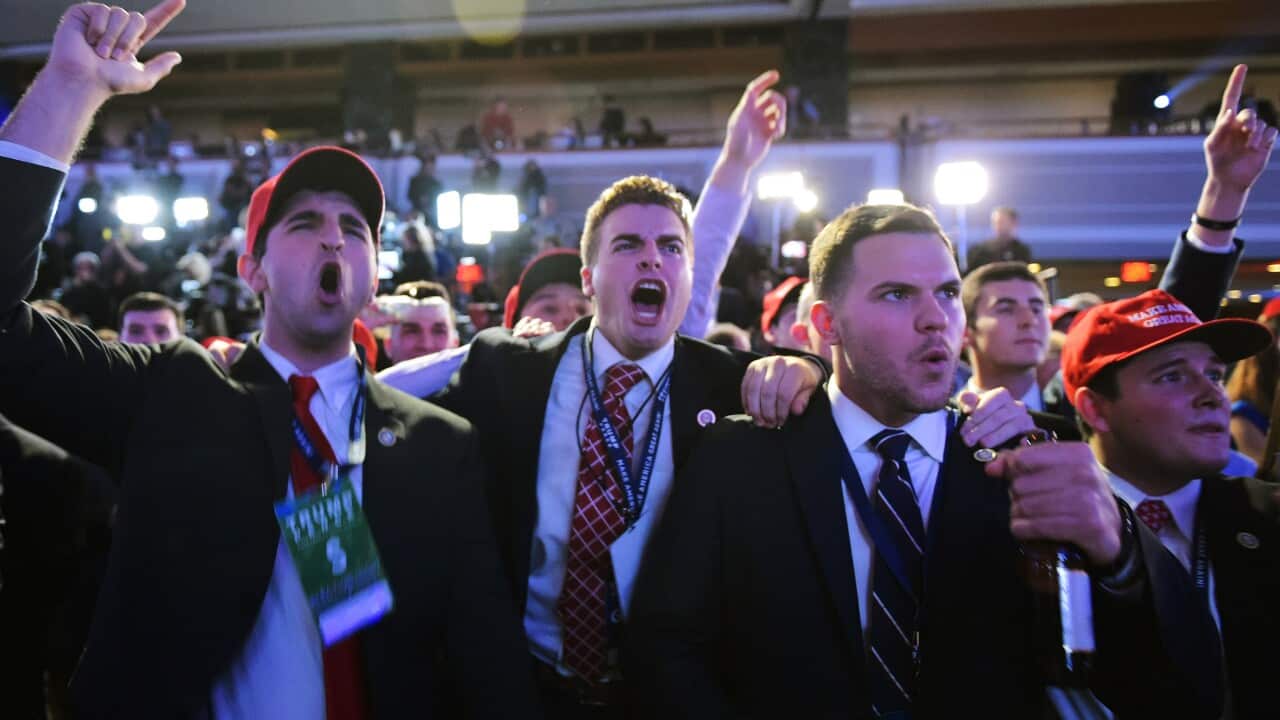 Gregory Angelo was at an election party at the Capitol Hill Club in Washington DC last night.

Unlike the vast majority of election observers,
this particular Republican
says he wasn’t surprised as Trump results rolled in much stronger than expected.

“I’ve wanted him to be president since I was 10-years-old,” he told SBS.

Advertisement
When reminded Trump was a Democrat at that time, the staunch Republican shot back that he was technically unaffiliated too, given he was too young to vote.

As he watched the results on Fox News with his boyfriend asleep beside him, Angelo was happy and “ready to make America great again".

Donald Trump’s stunning and decisive victory in the early hours of Wednesday morning came as a shock to many around the world – a feeling of nausea appeared common to many of those vehemently opposed to him – but it was a vindicating and expected victory to many of his supporters.

Clinton supporters react to live coverage of the US elections at an event hosted by the American Chamber of Commerce (AmCham) in Hong Kong. Source: EPA/ALEX HOFFORD

Those supporters are ecstatic with his win, and deeply optimistic about America’s future under a Trump presidency.

After months of antipathy for the media and the polls, which supporters claimed were against them.

After fights with family and friends, slurs from strangers on the street, Trump’s loyal supporters have finally been vindicated.

She said she felt real hope for herself and for America’s future.

“It's going to take an outsider to get the ball rolling, and boy I can't wait to watch it,” she said.

“I'm relieved our country can address some issues that would not be addressed if Hillary won.

“Two out of three people told pollsters that our country was heading in the wrong direction – disappointed in Washington DC – and it is reflected in tonight’s decision,” he said.

Giesige’s hometown of Cleveland hosted the 2016 Republican convention, a fact he takes pride in.

“Trump represents forward progress while Hillary Clinton represented more of a stuck in the mud, 'nothing wrong here' attitude,” he said.

Carolyn Duggan lives across the country in Tennessee, but she told SBS she felt the same way.

“It was a chance to take our country back for our children and grandchildren. I believe there was some divine intervention along the way.

“I am a Christian who feels like our country had lost its way. I want to keep our country- not globalisation. I know I won't agree with everything that Trump does, but his values are mine,” she said.

When asked what she would say to Americans who were feeling shocked, worried and concerned at Trump’s win – as many Democrats are, she said: “It will be okay.”

“No need to fear if you are a law abiding citizen interested in making America great again. The greater danger was the Clinton crime family."

US Republican presidential nominee Donald Trump gestures next to his son Barron and his wife Melania Trump as he delivers his victory speech. Source: SHAWN THEW

Jim Logan in New Jersey, a solidly Democratic state that voted for Clinton, was ecstatic. He has a similar distrust of Clinton.

“Finally someone who gets it,” he told SBS.

“I am so happy that jobs will come back, the military will treated better than refugees, and the Clinton cartel is finally over.

“I’m tired of the corruption - all the tax after tax - I have wanted a businessman since Ross Perot [a failed independent candidate in 1992 and 1996],” he said.

Jereme Sebero in Wisconsin, a swing state which fell to Trump, summed up the anti-establishment mood which drove many to the polls.

“We are sick of the corruption, we are sick of our politicians being bought and selling their soul. The country has spoken and we are all super excited to see what future brings,” he said.

Lily Smith from New Hampshire, a swing state on a knife-edge, said her support for Trump had come at a cost, damaging her relationships.

“I have been behind Trump since Day One. I have never wavered. I saw his heart and I truly believed in his sincerity.

“No one in my family, none of my close friends or colleagues were for Trump. I lost friends and have currently cool relationships with members of my family,” she said.

Ms Smith traveled to four Trump rallies and volunteered for the campaign, which raised her spirits.

“Each rally was exciting, affirming and fun. I met wonderful people at rallies,” she said.

Dale Giesige in Ohio said he would celebrate by sleeping.

Clinton only conceded in the early hours of Wednesday morning – that was after Mr Giesige had spent 15 hours working at a local polling station.

“I can celebrate later,” he said.

Trump victory is a mixed cocktail

US Votes: how did the polls get it so wrong?