Voted in, sworn in, and on a plane: Anthony Albanese’s international victory lap

ANALYSIS: In just a day, Anthony Albanese became Australia's new prime minister and boarded a plane to represent the country on the world stage. 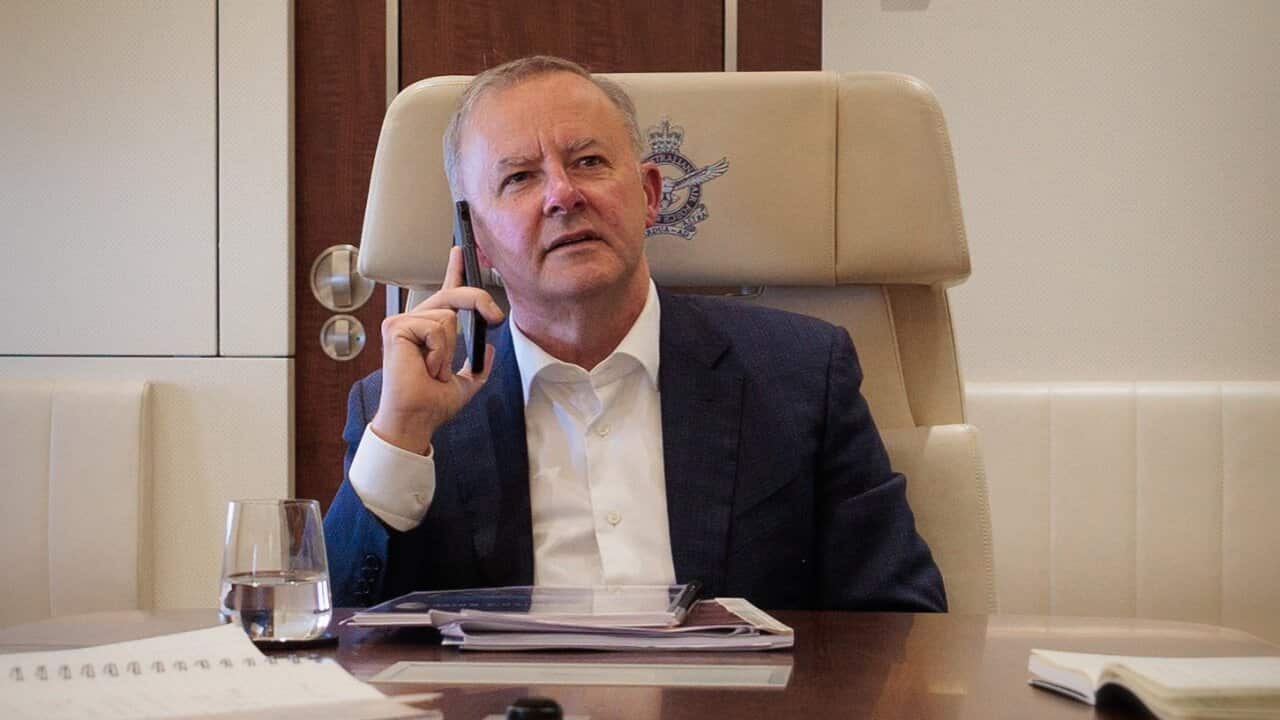 Anthony Albanese was sworn in at Government House on Monday ahead of a trip to Tokyo for the Quad meeting with leaders of the United States, Japan and India. Source: Twitter / @AlboMP

Just 24 hours after being sworn in as Australia’s 31st prime minister, Anthony Albanese will be tucking his feet under a table full of powerful international leaders.

The leaders will gather in the shadow of Beijing’s growing ambitions for the region, and the recent official signing of the China-Solomon Islands security pact during the Australian election campaign.
Advertisement
READ MORE
Anthony Albanese has made his key election promises. His next hurdle is to deliver them
Known by its shorter title of “The Quad”, the diplomatic talks are also expected to canvas climate policy, an area Anthony Albanese has identified as his key prime ministerial legacy.

On the plane ride to Tokyo, Anthony Albanese was in touch with another key strategic ally, conducting a 25-minute conversation with UK leader Boris Johnson.
The discussion was described by Australian government sources as “friendly and very positive”, the pair speaking about the
AUKUS deal that was struck by the former Morrison government
along with climate policy.

Mr Albanese is also expected to have one-on-one meetings with all three Quad leaders.

While the rise of China is likely to dominate, there will be significant discussions about climate commitments.

It’s unclear whether the situation in Ukraine will be raised on a detailed level, a sore point for India which has so far decided against imposing any sanctions on Russia over the invasion.
Cyber warfare and the ongoing impacts of the pandemic relief efforts are also likely to be on the table.

Anthony Albanese’s pick for Foreign Minister Penny Wong has accompanied him on this Japanese flying visit, where she’s expected to meet her counterparts on the sidelines of the talks.

Before buckling into the plane she recorded a video message for Pacific nations.
“I’ve become foreign minister at a time when our region faces unprecedented challenges, but we will face these challenges together.”

“We want to help build a stronger Pacific family.”

In the wake of the Quad discussions, there will be even more focus on the reactions from those Pacific nations, and which family they decide to align with.
SHARE
3 min read
Published 23 May 2022 at 9:49pm, updated 24 May 2022 at 7:03am
By Anna Henderson
Source: SBS News