WA to remain closed for holiday season, reopen border at 90 per cent vaccination

Western Australians will be isolated from the rest of the country over the summer holiday period, with the state targeting a late-January or early-February reopening. 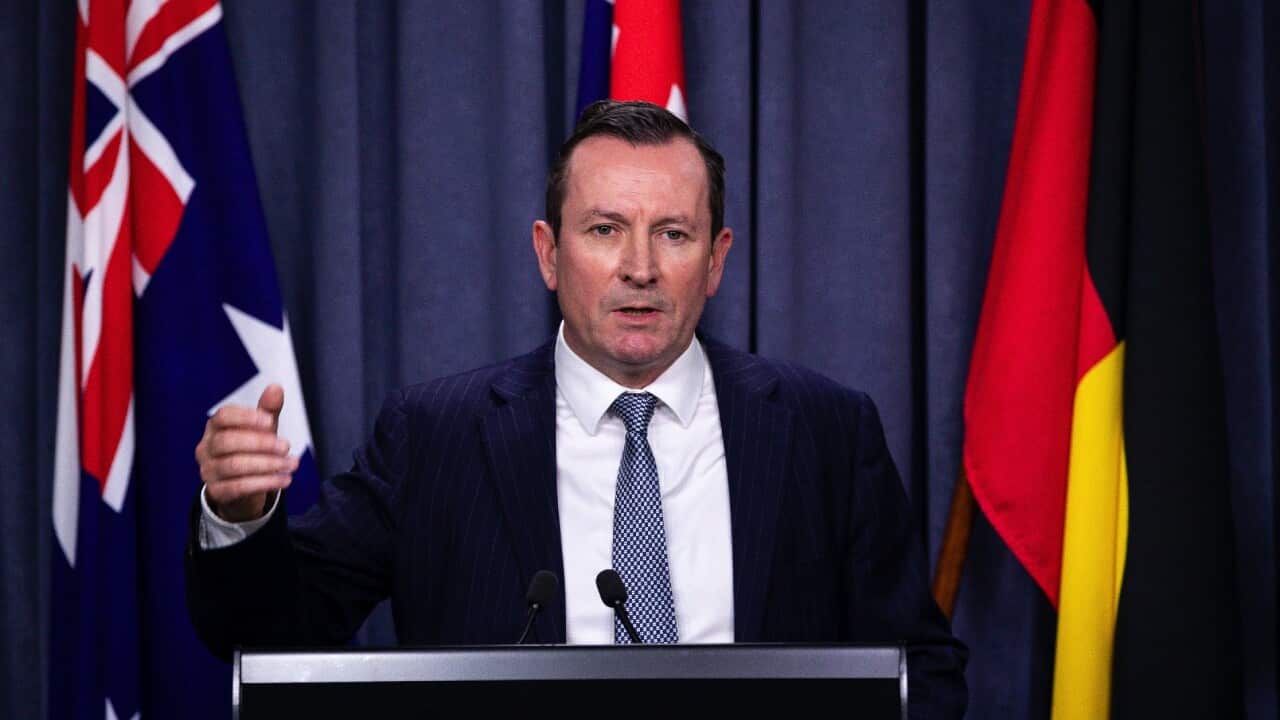 Western Australia will wait until as late as early-February to reopen its interstate borders in a move the premier says will save hundreds of lives.

Unveiling the state's long-awaited border transition plan on Friday, Premier Mark McGowan did not set a specific reopening date but said controls would be eased once the state achieved 90 per cent vaccination for people aged 12 and above.

That threshold, which requires another 250,000 West Australians to get vaccinated against COVID-19, is expected to be reached by late-January or early-February.

A specific reopening date will be locked in once the state achieves 80 per cent vaccination, expected in the first half of December.

"I acknowledge some people will be frustrated. They may not be able to be reunited with family from New South Wales or Victoria over Christmas," the premier told reporters.

"But as difficult as it is, it is for the right reasons."

Once the borders reopen, face masks must be worn in high-risk indoor settings including public transport, hospitals and aged care facilities.

Proof of vaccination will be required to attend large events with crowds of more than 1000 people as well nightclubs and the casino. Entry to remote Indigenous communities will remain restricted and contact registers will still be used.

"Once we set that date, it will be locked in," Mr McGowan said.

"But if we don't, on that date, reach the 90 per cent double-dose vaccination, that means there will be further public health social measures put in place.

"That would mean restrictions on venues, on workplaces, restrictions when it comes to masks, all those sorts of things that we're desperately trying to avoid."

Mr McGowan said the state government would not be "swayed or pressured to a different approach" as he outlined the plan for reopening.

He said the policy is based on modelling which shows that 200 lives will be saved by reopening the borders at the 90 per cent double dose coverage, versus 80 per cent.

"The difference in easing border controls at 90 per cent rather than 80 per cent is 200 West Australian lives are saved," he said.

"The differences are stark. They cannot be ignored, nor can the benefits."

The state is expected to achieve the 90 per cent target in late January or early February.

"Our island within an island has delivered health and economic results that have been the envy in the world and the best in the world. And with a safe transition, we have the potential to keep it that way," he said.

Entry to WA is currently highly restricted to people from Victoria, the ACT and NSW but other travellers are not required to enter quarantine.

From the transition date, interstate travel will resume but all arrivals will be required to be fully vaccinated and return a negative test.

Fully vaccinated international travellers won't need to isolate but those who are unvaccinated must undergo 14 days quarantine.

The government has not ruled out restricting travel between regions should vaccination rates be insufficient outside the metropolitan area.

"Cutting off the Pilbara or any region, for that matter, is not something I want
to do," Mr McGowan said.

"But if that's what is required to protect the local community and local industries, then we will take that step based on the health advice at the time.

READ MORE
'We really miss them': WA children plead for border to reopen so families can reunite

"The sooner you get vaccinated, the sooner the safe transition plan can kick in."

The premier rejected criticism that WA was acting against the national reopening plan, saying NSW and Victoria had "ignored every agreement".

"They've opened up internationally when the agreement was that that wouldn't happen," he said.