'We should kill them': Hindu extremists leave no room for beef eaters

A series of murders in India, linked to the slaughter of cattle and consumption of beef, is raising questions about whether the Hindu-dominated country is becoming less tolerant of minority religious groups. 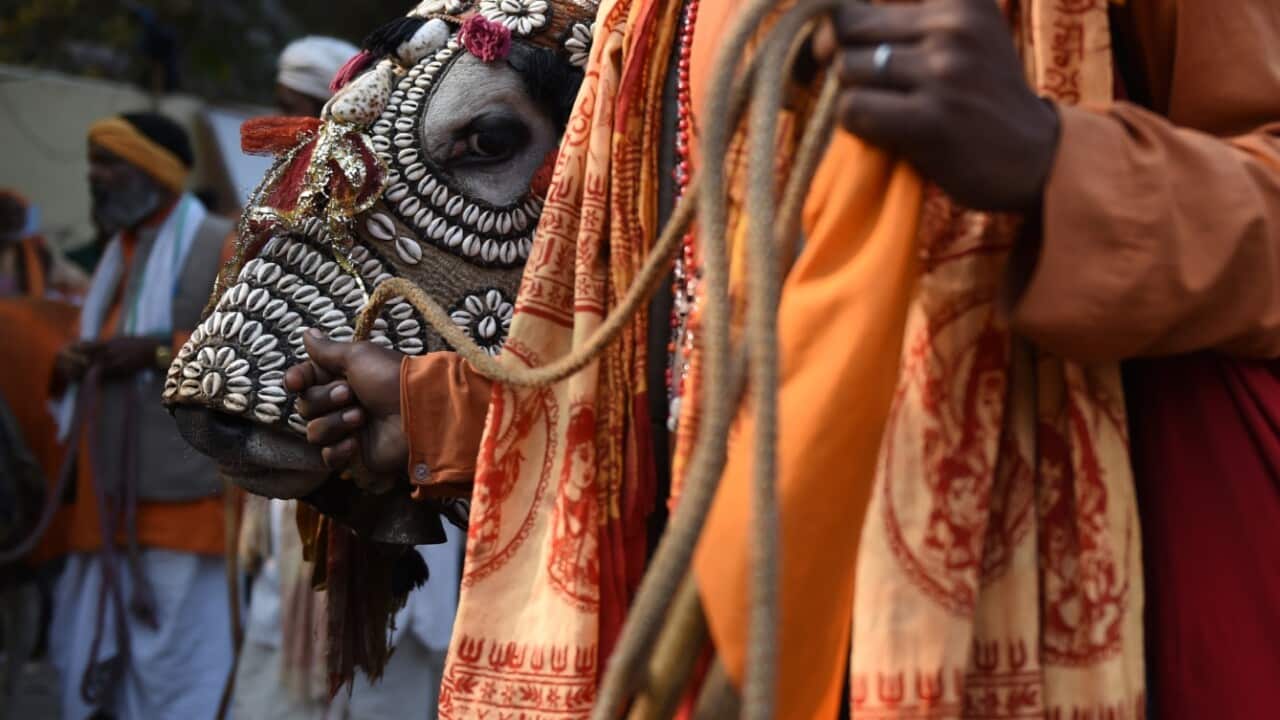 An Indian man holding onto a cow during a protest against the killing of cows in India from February 28, 2016 Source: Getty Images

Dawn has broken and Manjesh Prasad is preparing for his daily puja. He’s dressed in an orange dhoti, a length of cloth wrapped around his legs and waist and knotted under his bulging belly, ready to perform the ancient Hindu ritual.

Mr Prasad disappears into a small shrine on his uncle’s 15-acre farm to make his spiritual connection with the divine. He returns a quarter of an hour later, changed into a collared shirt and pants and ready for his day job. More holy work, as he sees it, managing a “gaoshala”, or cow shelter in the southern Indian state of Karnataka.

“We have protected 650 cows with the help of the public,” says Mr Prasad.

Gaoshalas are common in India, run by Hindus like Mr Prasad in an attempt to protect cows from being slaughtered for meat.  “The cows are like a God to us,” he explains.

Mr Prasad walks among the cattle – patting one here, another there.  But his gentle disposition dissolves when asked about people who slaughter cattle.

And what about Christians and Muslims who eat beef?

“In many cases there has been a stunning silence on the part of the authority when such things happen.” (SBS) Source: SBS

It’s a very radical response and not something that the vast majority of Hindus would agree with.

However, since India’s nationalist Bharatiya Janata Party (BJP) came to power in 2014, there have been a number of murders across the country linked to the slaughter of cows.  Cattle traders, an alleged cattle smuggler and even a man accused of storing beef in his home have all been killed.

On March 18, two Muslim cattle traders were murdered in the north-eastern state of Jharkhand, their bodies found swinging from a tree.  One of the victims was just 14-years-old.

Local police have told SBS eight men have been arrested over the killings and are currently in prison in Latehar district.  They’re likely to face trial in June.

In a separate incident, a 20-year-old Muslim man was killed in Himachal Pradesh last October, killed by a mob of villagers who accused him of smuggling cattle.

A month earlier, Mohammad Ikhlaq, a Muslim man from Dardri, Haryana, was attacked by a mob after locals at the temple broadcast a rumour that he was storing beef in his home.  Mr Ikhlaq died in the attack and his 22-year-old son was seriously injured.

related reading
Farmer back after fundraising run through India

Sandeep Shastri, Pro Vice Chancellor of Jain University, says the government has been extremely slow to condemn the violence of vigilante groups.

“In many cases there has been a stunning silence on the part of the authority when such things happen,” he says.

“Possibly the government feels that this is an issue on which they need to soft pedal and possibly, as some would argue, this has encouraged these groups to take forward their agenda with greater ferocity.”

“It would have been nice if the prime minister who represented the government and the country came out immediately, openly, directly, forcefully, to state this was something his government would not accept.”

During the 2014 election campaign, Narendra Modi warned that if the Congress party retained power there would be a pink revolution – evoking an image of bloody cow slaughter.

Some Indian liberals say under Modi’s BJP government extremist Hindu supporters looking to push a religious agenda have been emboldened.

But supporters of the BJP say the killings and other cases of intimidation are isolated incidents that also happened under past Congress governments.

Mayankeshwar Singh is the national convenor of the BJP’s cow development cell.

He rejects suggestions the country is becoming more intolerant of religious minorities. “It’s a slogan of left (wing) parties and the opposition.  It’s a well-planned conspiracy to defame the BJP and Modi government,” he told SBS.

Dr Shastri of Jain University says the ‘carnival of hatred’ must end.

“The time has come that these (vigilante) groups stop stoking the fires of hate towards other groups in their communities,” he says.