It's been almost 40 years since her uncle's death, but Kyah Patten hopes the Black Lives Matter movement will help to bring about real change in seeking justice. 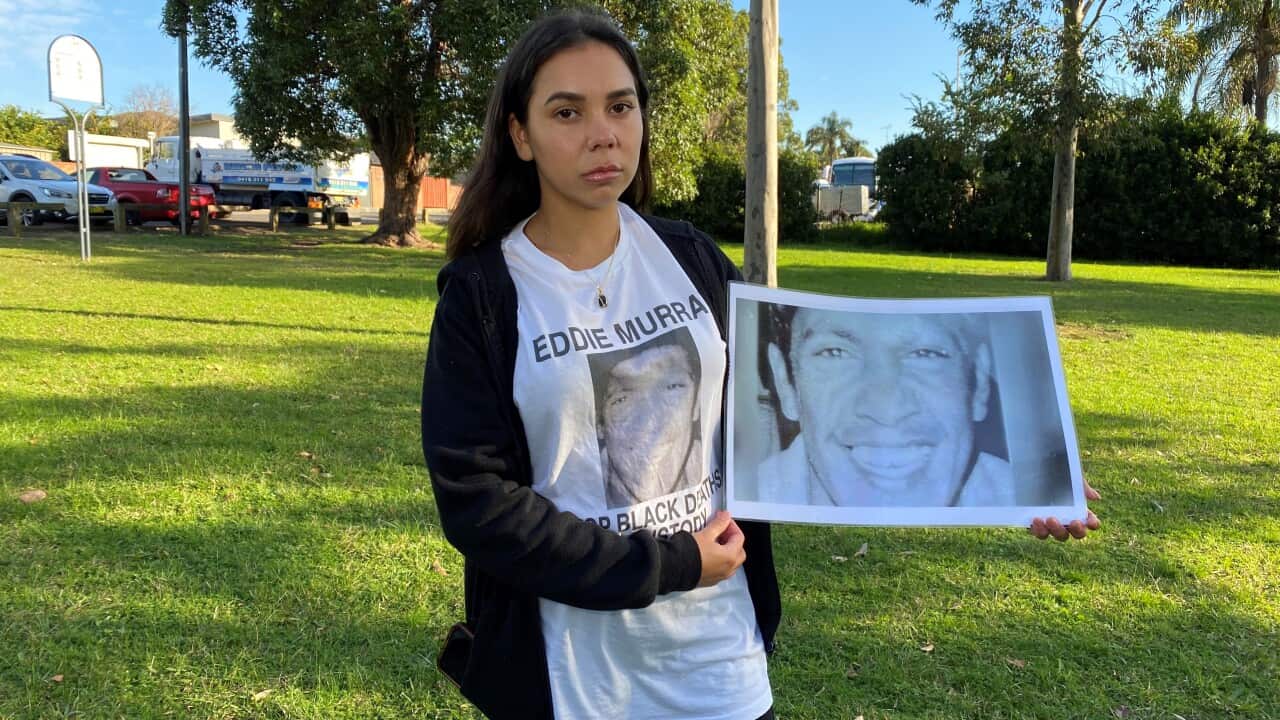 Kyah Patten is carrying on a fight her grandparents took up decades ago, seeking justice for the untimely death of their son Eddie Murray who died in custody almost 40 years ago.

Mr Murray, a Kamilaroi man and rising rugby league star, was out celebrating an upcoming football trip in the northern New South Wales town of Wee Waa when he was detained.

Ms Patten, now 26, never had the privilege of knowing her Uncle Eddie.

Advertisement
“I still cry for him like I've known him, you know he is my blood and he is my mum's brother,” she says through tears.

“To not even have the privilege to meet your uncle or your aunty, to have their life taken away at such a young age, it hurts.”

On 21 June 1981, 21-year-old Eddie Murray was found hanging in a Wee Waa prison cell just an hour after being detained by police.

He was picked up at the front of a local pub for being drunk and disorderly under the now-repealed Intoxicated Persons Act.

Police ruled his death a suicide but it’s a verdict his family has always disputed.

Eddie Murray was found dead in his cell an hour after being detained. Source: SBS

“His life was just beginning, you know. He moved to Sydney for football, he was just getting his life on track, and he was taking that next step and becoming a man,” Ms Patten says.

The night Mr Murray was detained, he was planning to travel to return to Sydney to live.

“The reason him being home was to say his goodbyes to parents, to his brothers and sisters, because he was actually excited to see where his life was headed,” she says.

“He had no reason to hate his life or do anything to himself, to hurt himself or his family. One hundred per cent we believe that something else happened to him.”

A coronial inquest was unable to determine if Mr Murray died "by his own hand or by the hand of persons or a person unknown", but reached a conclusion there was not enough evidence to say police were involved.

Mr Murray’s parents Arthur and Leila Murray, both now deceased, campaigned to find out what really happened to their son.

Their determination lead Mr Murray’s case, and many others, to be the first investigated by the Royal Commission into Aboriginal Deaths in Custody.

The inquiry was critical of police evidence, but it too found suicide was likely the cause of Mr Murray’s death.

His family again refused to accept the finding, exhuming his body a decade later in 1997.

They discovered Mr Murray had a fractured sternum, which had not been identified at the inquest or Royal Commission.

But it couldn't be determined if the injury was a blow to the chest before death or during resuscitation attempts, even though the Commissioner's report doubted attempts to resuscitate were ever made.

But as the Black Lives Matter movement continued to unfold In Australia following the death of black American man George Floyd at the hands of police, it was a chance for Mr Murray’s family to shine a light on his case again.

His niece, Ms Patten, spoke at a Sydney rally last month on behalf of her family.

“I feel like in my eyes it’s a revolution, I feel like we're rising up, all around the world,” she said.

“It’s a tragedy it had to take a man of colour half way across the world to die for this to happen…it’s a wake-up call to really take our power back.”

“We're sick of being swept under the rug.”

But after 39 years, options for Eddie Murray’s family have become slim.

Human rights lawyer George Newhouse works with the National Justice Project, which in the last 10 years has focused on exposing injustices Aboriginal and Torres Strait Islander people face in the justice system.

“The criminal justice system lets down Aboriginal and Torres Strait Islander people all the time and a death in custody is the pinnacle of those injustices,” he said.

“Unfortunately, at this late stage I do believe it will take political action to generate an inquiry.”

Since the Royal Commission into Aboriginal Deaths in Custody in 1991, there have been more than 430 Aboriginal deaths in custody and only a handful of its 339 recommendations have been implemented.

Now, the federal government has announced new justice targets to reduce the high rates of Indigenous incarceration as part of a refreshed Closing the Gap strategy.

Minister for Indigenous Australians Ken Wyatt said the government is working with the states and territories, and a coalition of peak Indigenous organisations, to reduce Indigenous incarceration by at least 15 per cent in 10 years.

"What we are doing is saying here are the targets, we're ambitious, we're going to work towards them," he said.

"It's now a pre-eminent ... one of the pre-eminent targets that we will do a lot of work around."

“It's pointless having a target or two and nothing changing,” she said.

“The federal government through the new COAG process can make this a priority and should make it a priority because of the very real issues of the impacts on families, on communities and the fact that this keeps happening.”

Kyah Patten believes not enough has been done by successive governments and will continue the crusade of her grandparents.

“I know I did them proud ... I'm here today to continue this fight and to hopefully get what they fought for.

"What they started I hope to end.”