The US President has officially launched the Indo-Pacific Economic Framework for Prosperity, which is comprised of 13 founding countries including Australia. 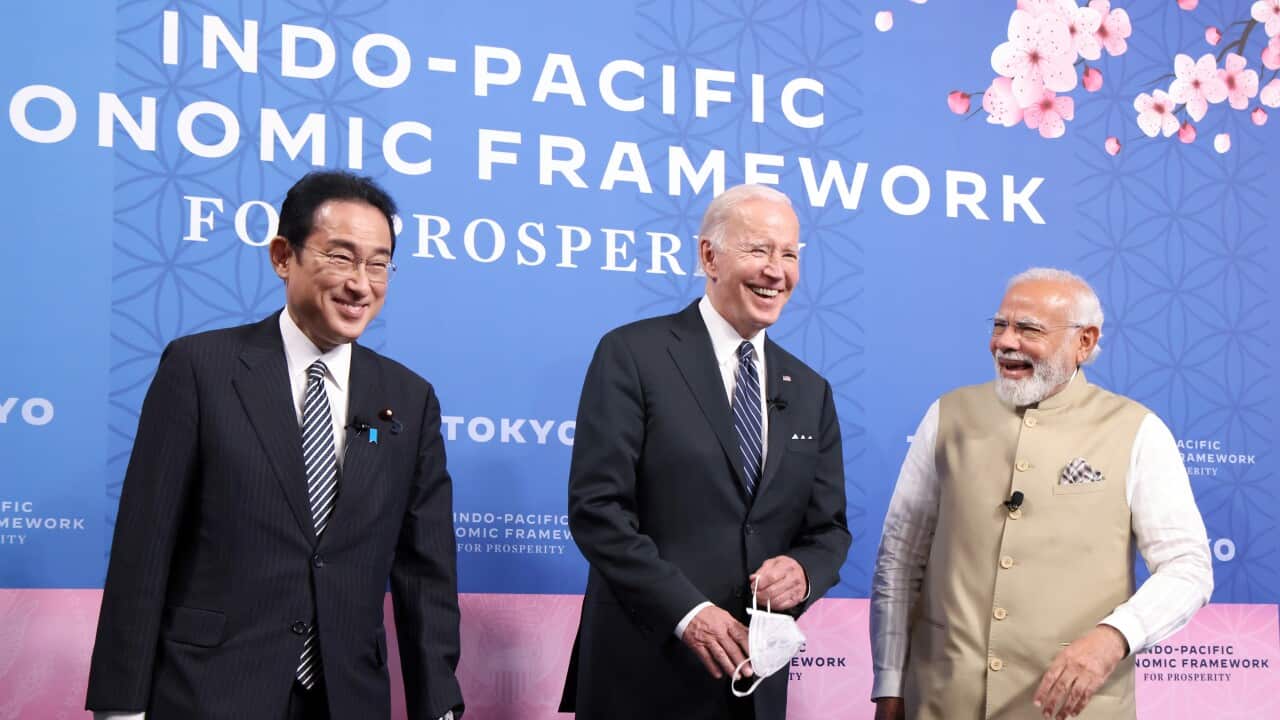 United States President Joe Biden has launched his plan for US economic engagement in Asia, leaving it to the 13 founding countries, including Australia, to work out how to enforce their agreements.

Mr Biden formally unveil the Indo-Pacific Economic Framework for Prosperity (IPEF) on 23 May, although critics said it offered scant benefits to countries in the region even before it was announced.

The White House says the deal offers no tariff relief to the countries that join - including India, Malaysia and the Philippines - but provides a way to sort through issues ranging from climate change to supply chain resilience and digital trade.

Advertisement
Washington has lacked an economic pillar for its Indo-Pacific engagement since former president Donald Trump quit a multinational trans-Pacific trade agreement, leaving the field open to China to expand its influence.
READ MORE
Trump torpedoes Pacific trade pact
"The future of the 21st Century economy is going to largely be written in the Indo-Pacific - in our region," Mr Biden said at a launch event in Tokyo.

Mr Biden wants the deal to raise environmental, labour and other standards across Asia.

But those founding countries will need to negotiate what standards they wish to abide by, how they will be enforced, whether their domestic legislatures will need to ratify them and how to consider potential future members, including China, officials told reporters.

READ MORE
'Deep regret and dissatisfaction': Taiwan's bid to join WHO assembly fails
"This will enhance access to sources of finance and technology," said Thai Prime Minister Prayuth Chan-ocha, who joined the launch event by video.

"It is still a work in progress, with detailed consultations planned in the near future."

US Commerce Secretary Gina Raimondo told reporters the IPEF presents Asian countries with "an alternative to China's approach to these critical issues".

China has expressed no interest in joining IPEF.

Many of the standards Washington wants would make such a deal unpalatable to Beijing, a US official said.

Also left out of the initial talks was Taiwan, which wanted to join.

Mr Biden's national security adviser, Jake Sullivan, told reporters Taiwan would not be a part of the IPEF launch.

Still, Washington is looking to deepen economic ties with the self-governing island, which China claims.
READ MORE
What's going on between Taiwan and China, and does it affect Australia?
The IPEF, introduced on Monday, is an attempt to salvage some part of the benefits of participation in a broader trade agreement like the one Trump quit, now known as the Comprehensive and Progressive Agreement for Trans-Pacific Partnership (CPTPP) and was then known as TPP.

Trade and economics experts at Washington's Centre for Strategic and International Studies said it was unclear how the Biden administration planned to achieve IPEF objectives or what incentives it would be able to provide to encourage cooperation.

In a briefing note, they said that lowering the barriers to participation in the launch by not requiring commitments to enter negotiations had succeeded in attracting a higher number of participants than would otherwise have been expected.

"However, these countries only committed to attending an initial scoping round of discussions, and whether this broad initial enthusiasm for the framework continues once negotiations commence remains an open question," they wrote.

China applied in September to join the CPTPP.

When Japanese Prime Minister Fumio Kishida met with Biden privately on Monday, he said he told the US president that Washington should rejoin the trade deal.

US Trade Representative Katherine Tai said the TPP agreement the US quit "ultimately was something that was quite fragile."

"The biggest problem with it was that we did not have the support at home to get it through," she said of the deal.

Beijing appeared to take a dim view of IPEF.

"The Asia-Pacific should become a high ground for peaceful development, not a geopolitical gladiatorial arena."
SHARE
4 min read
Published 24 May 2022 at 8:34am
Source: Reuters