What is extradition and how does it work in Australia?

A number of high profile extradition cases involving Australia or its citizens have been making international headlines. Here's how it works. 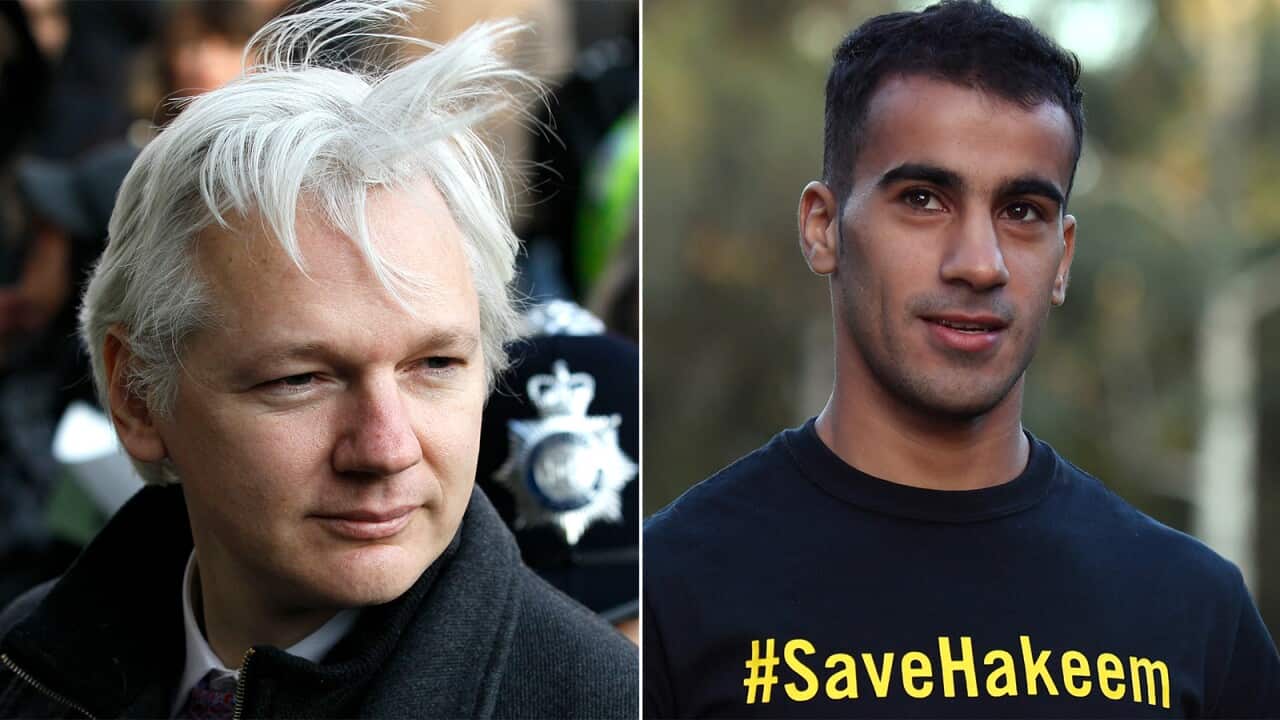 The case of refugee footballer
Hakeem al-Araibi
, IS member
Neil Prakash
, as well as Australian teacher
Malka Leifer
and nanny
Adriana Rivas
, have put extradition in the spotlight in recent months.

And on Thursday, after WikiLeaks co-founder
Julian Assange
was kicked out of the Ecuadorian embassy in London,
it was confirmed he is facing extradition to the US.

Mr Assange took refuge in the embassy in 2012 to avoid extradition to Sweden over a sexual assault case, which was dropped in 2017. The Australian, 47, now faces federal conspiracy charges and five years' jail in the US in relation to one of the largest ever leaks of government secrets.

Advertisement
Julian Assange faces up to five years in prison in the US if convicted of a conspiracy charge Source: AAP

The US alleges Mr Assange was involved in a 2010 conspiracy with whistleblower Chelsea Manning to access classified information on Department of Defense computers. He faces up to a year in a UK prison and will have his US extradition case heard on 2 May.

Extradition is a process designed to make sure criminals cannot evade justice simply by crossing borders.

"Extradition is essentially a request from 'country A' for someone in the jurisdiction of 'country B' who 'country A' wants to charge with a crime,” international law academic Kevin Boreham told SBS News.

For example, extradition can be pursued if a person commits a serious criminal offence in Australia and leaves to seek refuge in Canada before they can face justice. Australia can submit an extradition request to Canada for the return of that person to face prosecution in Australia.

READ MORE
Why is it so difficult to prosecute returning fighters?

Because extradition cases are expensive and time-consuming they are reserved for serious offences such as sexual assault, murder or fraud.

Extradition regimes vary by country, but are largely predicated by the establishment of an “extradition treaty”.

“An extradition treaty is simply an agreement between either two countries of a range of countries about how they'll deal with the process of extradition - it sets out who can be extradited and in what circumstances," Murdoch University law lecturer Lorraine Finlay said.

While many differences exist in Australia's various extradition treaties, there are also a number of commonalities.

“Many treaties say the offence someone may face charges for in another country also has to be an offence in Australia,” she said.

“There is also normally a 'political offences' exception. If we have reasonable grounds for believing the person is actually being wanted for a political offence (such as treason, sedition or terrorism), we won't extradite.

“Additionally, there are discrimination clauses, so if we have reasonable grounds to believe they're actually going to be punished for their race, sex, religion, or other ground like that, we won't extradite."

Australia's extradition regime is governed by
the Extradition Act 1988
and implemented by the Attorney-General’s Department.

Extradition is different from deportation. Deportation is the removal of a person from a country where they do not have a lawful right to be and it is overseen by the Department of Home Affairs.

Which countries are included?

Australia can make an extradition request to any country – but that does not automatically mean it will be successful.

Australia’s
treaty partners
have obligations to consider Australia’s requests. In the absence of a treaty, countries have no responsibility to consider requests.

The final decision over which countries Australia finalises a treaty with is made by the Attorney-General.

Extraditions involving Australia and New Zealand are governed by a special system known as the “backing of warrants” – when Australian authorities approve (or “back”) a New Zealand-issued warrant, or vice versa.

The process is overseen by prosecuting authorities and police from both countries and has no involvement by the executive government.

“The closeness of our relationship with New Zealand means there’s a streamlined process, which is something you’d expect from countries that are so close to each other, both in terms of our borders, but also in terms of our legal systems and the way they operate,” Ms Finlay said.

How many people have been extradited?

Between 2012-13 and 2017-18, Australia made almost twice as many applications to send people to face justice in another country (147) than it did to bring people here to face justice (77), according to the Attorney-General’s Department.

Aside from Australian citizens, Australia most frequently negotiated extraditions involving of The Republic of Ireland, the UK, the US and their nationals.

The most common five offences people were extradited to Australia for were: sex offences (including child sex offences), drug offences, fraud, murder (including manslaughter and attempted murder) and people smuggling.

During the same period, the top five offences Australia sent people away for were: fraud, sex offences (including against children), assault, drugs offences and driving offences. Australia also extradited one person for war crimes during that time.

What about human rights issues?

Australia's extradition treaties contain "various mandatory and discretionary grounds for refusing requests on the basis of human rights and other humanitarian considerations,” a spokesperson for the Attorney-General’s Department told SBS News in a statement.

“The Attorney-General considers requests on a case-by-case basis in accordance with our human rights obligations and he has a general discretion under the Extradition Act 1988 to refuse to surrender a person," they said.

A failure to ensure the observation of human rights and the right to a fair trial is often behind unsuccessful extradition requests and treaty negotiations.

A photo taken outside the High Court of Australia. Source: AAP

Arthur Moses, the President of the Law Council of Australia, said these were key reasons behind
failed attempts to negotiate an extradition treaty with China
in 2016.

“One issue was the limited protection for the right to a fair trial within China - that the judiciary that was not truly independent from the executive arm of government,” he said.

“The other main issue was the fact the death penalty still exists."

The lack of international communication which led to
Thailand's erroneous detainment of Melbourne-based refugee footballer Hakeem al-Araibi
, who was the subject of an extradition request from Bahrain, shows why small reforms might he helpful, Ms Finlay said.

“It's absolutely vital to Australia that we have strong relationships with other countries in terms of cooperating on law enforcement.

“But at the same time, we need to balance that with the fact that there are serious human rights concerns with types of things so that, in particular, Australian citizens, or people that have sort protection from Australia, are actually given the protection that they need."