The first truly universal climate treaty is aimed at preventing the worst-case scenarios of global warming with the United States the only country to opt out. 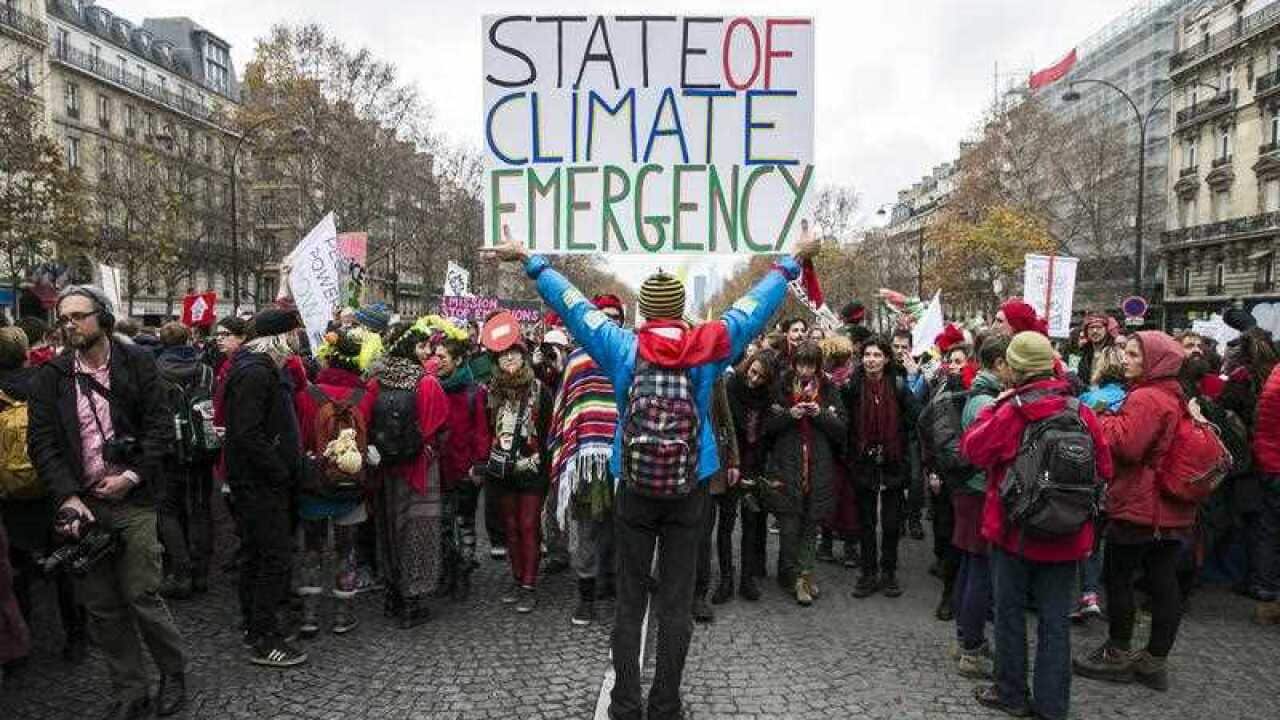 A demonstrator holds a poster stating 'State of Climate Emergency' behind Indigenous people during a protest during the COP21 in Paris, France, 2015 Source: AAP

The 2015 Paris Agreement, which the United States will quit according to President Donald Trump's previous announcement earlier this year, is the first pact to commit all nations to limiting global warming caused by emissions from burning coal, oil and gas.

A total of 196 nations, including the Palestinian authorities, have endorsed the agreement and 147 have officially ratified it.

Advertisement
The accord entered into force in record time on November 4, 2016, when it crossed the threshold of 55 ratifying parties representing 55 percent of global greenhouse gas emissions.

China, the world's number one greenhouse gas polluter and Europe, number three after the US in second place, recommitted to the Paris Agreement Thursday.

The biggest polluter not to have ratified the deal is Russia (number five after India).

Syria announced it would join the Paris Agreement on November 7, 2017, which will bring the total number of nations to 197 and leave the United States as the only one opting to stay outside the landmark treaty.

According to the Syrian parliament website, a bill was passed on October 22 to ratify the Paris accord, "in accordance with the Syrian Constitution which stipulates the protection of the environment".

Nations agreed to hold global warming to "well below" two degrees Celsius over pre-Industrial Revolution levels, and to strive for a limit of 1.5 degrees Celsius.

The lower goal was a demand of poor countries and island states at high risk of climate change effects such as rising sea levels.

But experts say even the two-degree ceiling is a tall order, requiring an immediate and deep reduction in planet-warming emissions from burning fossil fuels - an industry with major influence in Washington.

Based on voluntary emissions-cutting pledged by countries so far, the planet is on track for warming of about three degrees, many scientists say - a recipe for possibly catastrophic floods, storms, drought and ocean-level increases.

Without the US administration on board, the goal may move even further out of reach.

RELATED READING
What happens if Trump withdraws from the Paris climate deal?

The signatories will aim for emissions to peak "as soon as possible", with "rapid reductions" thereafter.

By the second half of this century, according to the pact, there must be a balance between emissions from human activities such as energy production and farming, and the amount that can be absorbed by carbon-absorbing "sinks" such as forests or storage technology.

Developed countries, which have polluted for longer, must take the lead with absolute emissions cuts.

Developing nations, which still burn coal and oil to power growing populations and economies, are encouraged to "continue enhancing" their efforts and "move over time" towards absolute cuts.

In 2018, and every five years thereafter, countries will take stock of the overall impact of their efforts to rein in global warming, according to the text.

It "urges" and "requests" countries to update their pledges by 2020.

Some nations, including the United States, set emissions-curbing targets for 2025, others for 2030. Both categories are meant to be updated every five years.

Rich countries are expected to provide funding to help developing countries make the costly shift to cleaner energy sources and to shore up defences against the impacts of climate change.

Donor nations must report every two years on their financing levels - current and intended.

In a nonbinding "decision" that accompanies the agreement but is not included in it, the $100 billion (89 billion euros) per year that rich countries have pledged to muster by 2020 is referred to as a "floor" - meaning it can only go up.

According to an OECD report, pledges made in 2015 alone would boost public climate financing (excluding private money) to $67 billion in 2020.

But Mr Trump has hinted the US, which had pledged $3 billion towards the Green Climate Fund, of which it delivered $1 billion under his predecessor, Barack Obama, will not honour its financing commitments.

The agreement makes provision for parties to withdraw, but notice can be given only three years after its entry into force in 2016. The actual withdrawal would take effect a year later - meaning 2020 if the Trump administration uses this option.

A country can also withdraw from the 1992 UN Framework Convention on Climate Change, under whose auspices the deal was negotiated. Withdrawal would take effect a year after notification.