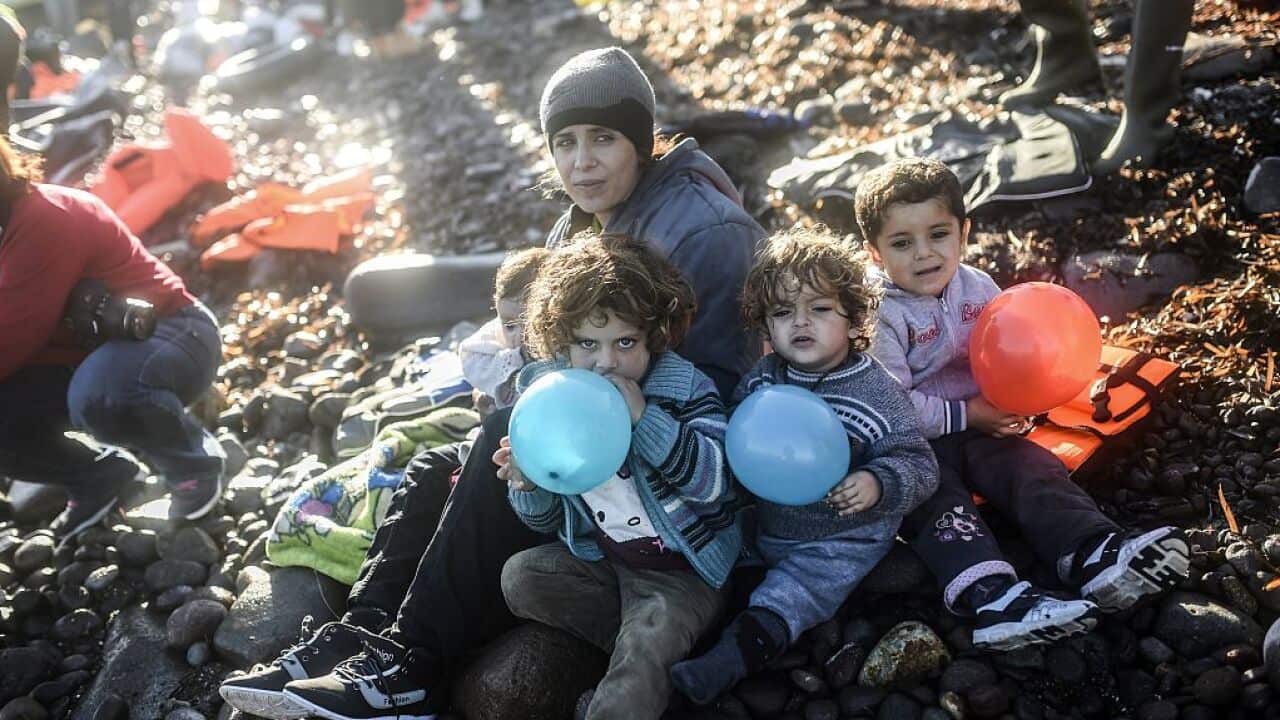 The Iraqi ethnic minority has been the target of persecution for centuries and often unjustly accused of being "devil worshipers".

Published 21 May 2018 at 10:56am
By Kerrie Armstrong
In 2014, Islamic State militants swept into parts of northern Iraq where Yazidi people lived for centuries. Many were held captive and killed, while others fled.

Who are the Yazidi people?

The Yazidi people traditionally live in northern Iraq, particularly around the Nineveh and Dohuk provinces with large communities in Sinjar and Shekhan, where a number of their holy sites are located.

“Yazidis believe that they were the first people on earth,” he told SBS News.

“You can see that through their traditions."

“If you ask Yazidis whether they are Kurdish, they very vehemently disagree with that,” she said.

“They do not want to be identified as Kurdish. They think of themselves as an entirely separate group. And that feeling of separation from Kurds I think was significantly exacerbated by the fact that on August 3, 2014, when IS came in to slaughter them, the Kurdish military forces - the Peshmerga - pulled out entirely in the middle of the night, not warning any of them, and left them at the mercy of IS.”

Miss Wille, from Human Rights Watch, said the Yazidis were also frustrated with Kurdish attempts to “co-opt what happened to them, calling them 'Yazidi Kurds', thus calling that IS essentially carried out these horrific attacks on the Kurdish community”.

Religiously, the Kurds are Muslim, mainly Sunni or Shia, while the Yazidis follow their own religion, Yazidism.

Yazidis believe Yazidism is the oldest religion in the world and it incorporates aspects of Islam, Christianity and elements unique to Yazidism.

Yazidis believe God made seven angels to help Him create the world and Adam and Eve.

Yazidis gather to mark the New Year, their first since IS militants swept through the area last summer. Source: AAP

He asked the angels to bow down before Adam, but one angel refused and fell to earth and became a peacock, known as Melek Tawwus or the Peacock Angel, who God eventually put in charge of the angels and the humans on earth.

It is this story of a fallen angel as a figure of worship that has led to the persecution of the Yazidis.

Both Islamic and Christian traditions show the devil as a fallen angel, which leads many people to believe the Yazidis are devil worshippers.

Mr Smoqi said Yazidis do not believe in the devil or that that figure is the source of evil, but that “God only provides good for humanity and evil comes from the humans”.

He said Yazidism was only passed orally from generation to generation, in part as an attempt to avoid religious persecution.

“In Qur’an there is a story similar to this that says that devil did not bow or submit to Adam, so the radical Islamists believe that the Yazidis are devil worshipers … and therefore, according to their books in the Qur’an, they must be destroyed - they must be wiped out otherwise God would judge Muslims because they did not kill the Yazidis,” Mr Smoqi said.

He said outsiders were not permitted to convert to Yazidism.

"To be a Yazidi, one should be born from a father and a mother who are Yazidis," he said.

"That means one cannot become a Yazidi who is not a Yazidi."

Iraqi Yazidis light candles and paraffin torches outside the Lalish temple situated in a valley near Dohuk northwest of Baghdad Source: Getty

There are concerns this custom, and the requirement that Yazidis marry within the religion, may lead to an ever-shrinking community, especially given the dispersal of refugee groups around the world.

Human Rights Watch's Miss Wille said the refugee camps where many Yazidis have been staying are still close to some of the sacred sites in northern Iraq.

“Their most religious spot called Lalesh is fairly close to the camps they’re now located in, so they aren’t entirely cut-off from their religious establishments,” she said.

“Their top religious leaders are actually in this town of Lalesh.”

Why are the Yazidis persecuted?

The Yazidi people have often been the target of persecution over the years, often as a result of their differing religious beliefs.

Miss Wille said this persecution was not always in the form of violence.

“Mostly it’s just been significant marginalisation, zero investment in the area they live in - Sinjar,” she said.

“The Yazidi community is extremely impoverished.”

Traditionally farmers and shepherds, the separation of the Yazidis from their traditional lands in Sinjar means many of them were left without a way to make a living.

Deakin University politics and policy studies Associate Professor Benjamin Isakhan told SBS News that IS was not the only group that had targeted the Yazidis.

Displaced Iraqis from the Yazidi community gather for food at the Nowruz camp, in Derike, Syria. Source: AAP

“Many Yazidis got caught up in that Arabisation project and got forced out of their traditional lands.”

Associate Professor Isakhan said the IS attack was an attempt to “wipe their historical memory off the face of the earth”.

The date August 3, 2014 is burnt into the collective consciousness of Yazidis. It is the day IS overran their homes in Sinjar, killing and kidnapping hundreds of people and destroying their temples, villages and even their cemeteries.

Miss Wille said many Yazidis no longer trusted the Kurds after the IS attack.

“August 3, 2014 is when IS came in to slaughter them, the Kurdish military forces - the Peshmerga - pulled out entirely in the middle of the night, not warning any of them and left them at the mercy of IS," she said.

"And we know what happens, which was a horrific atrocity.

"So as a result, there’s just this fervent anti-Kurdish feeling within the Yazidi community.”

Mr Smoqi said the Peshmerga did not attempt to defend the Yazidis from IS.

“Around 10,000 security force members, they were supposed to protect the Yazidis, but when IS came the Kurdish Peshmerga run away, they didn’t fight, they didn’t fire one bullet,” he said.

“Our documentation team at Yazda.org, we’ve documented more than 30 mass graves of Yazidis.”

Associate Professor Isakhan said the IS attack and the IS treatment of the Yazidis “meets all of the minimum criteria by which one could measure an active genocidal campaign”.

“It was a very deliberate and very specific campaign where they actively persecuted a specific group of people with the direct intent of removing as many of them as possible, in terms of physically executing people, taking as many others as possible into enslavement,” he said.

“That really constitutes genocide, when you undertake a multi-pronged attack against a specifically identified group in order to erase their very existence. That’s genocide.”

In June 2017, the United Nations confirmed the attack was part of a genocide in a report based on interviews with survivors.

The report also stated the "genocide of the Yazidis is ongoing" and called for the international community to act to halt the atrocities.

Where are the Yazidis today?

Many Yazidi families have resettled in countries as far afield as Germany, the United States, Turkey and Australia.

Others are still trying to seek asylum in European countries along with hundreds of thousands of other refugees and asylum seekers.

Yazidi migrant children wait to board buses on their way from the makeshift camp near village of Idomeni to another camp. Source: EPA

Miss Wille said as Iraqi forces approached Mosul and IS fighters retreated back to Syria, thousands of Yazidi women and children could have been forced to go with them.

"This practice of using the Yazidi women particularly as sex slaves is something that seems key to the community of these IS fighters and something they want to hold on to."

Baghdad declared victory over IS last December after a years-long battle to retake large swaths of territory the extremists seized in 2014.

But Mr Smoqi said Yazidis did not feel safe in their homeland, particularly after the Kurdish Peshmerga forces failed to protect the community in 2014.

“Yazidis don’t feel safe at all in their own homeland in Sinjar because when IS attack the Yazidis, that’s not the first time they are attacking the Yazidis,” he said.

“In 2007 Al Qaeda they attacked Yazidis with explosions. They killed more than 600 people.

Yazidi women hold posters during a protest against the IS group's invasion on Sinjar in Dohuk, northern Iraq. Source: AAP

“For Yazidis in the short term, I don’t believe that they want to go back to their homeland unless they have protection or support or they have their own province that they can protect, then yes.

“No-one, I believe, no-one wants to leave their own homeland, but they are struggling to survive.”

Australia has taken in Yazidi families as part of the 12,000 refugees the Abbott government committed to as a result of the conflict in Syria and Iraq.

But Miss Wille said there was a lot of fear within the Yazidi community.

“They’re scared of going home and leaving the camps, returning to their land, because they say, ‘if our Arab Sunni neighbours, who we lived next to for decades, could turn on us the way they did on the day IS came in and carried out the horrific massacre and abduction, we will never be safe on our land so long as there are any neighbours who are different to us’, and there’s just this level of uncertainty about what their future is,” she said.

“I think it’s done real damage to the community, to their religious establishments because it’s separated people now across continents and countries.

“A community that was extremely close and extremely dedicated to preserving their identity as a group.”