The World Health Organization reported a record one-day increase in global coronavirus cases on Sunday, with the total rising by 307,930 in 24 hours. 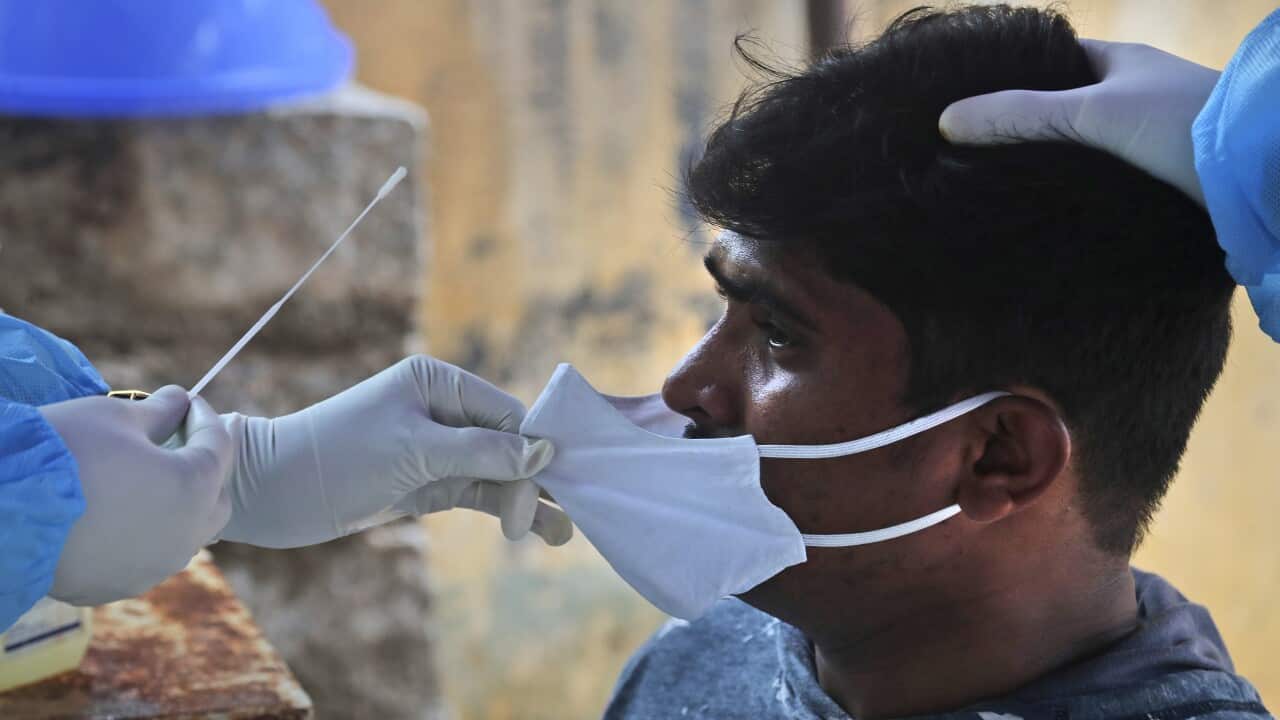 India's coronavirus cases are expected to soon surpass that of the United States. Source: AP

India, the United States and Brazil have recorded the biggest increases in daily COVID-19 cases, according to the World Health Organisation.

Both the United States and India each reported over 1,000 new deaths and Brazil reported 874 lives lost in the past 24 hours.

The Gaza Strip is under a nationwide lockdown after the first local cases of coronavirus infections were recorded. Source: AAP

Israel said Sunday it will reimpose a national lockdown after coronavirus cases soared, while European nations grappled with mounting infections against a backdrop of protests against restrictions aimed at reining in the pandemic.

Israeli Prime Minister Benjamin Netanyahu announced the three-week lockdown, which will hold people to within 500 metres of their homes, will start on Friday and could be extended.

The plan prompted the resignation of ultra-Orthodox Housing Minister Yaakov Litzman, who said the measures would prevent Jews from attending synagogue over the upcoming Rosh Hashanah and Yom Kippur holidays.

According to an AFP tally, Israel is second only to Bahrain for the world's highest coronavirus infection rate by population.

The scientist was a central figure in a presentation by Israeli Prime Minister Benjamin Netanyahu in 2018 accusing Iran of continuing to seek nuclear weapons. Source: AAP

Britain, France, Austria and the Czech Republic were among European countries reporting surges, with new cases in the UK reaching more than 3,000 in 24 hours for the second day in a row on Saturday.

After a spate of local lockdowns this month, new government restrictions come into force across England on Monday, limiting social gatherings to no more than six people.

Austrian Chancellor Sebastian Kurz said the country was already facing "the beginning of the second wave" as new daily infections climbed towards 1,000.

Mr Kurz said the government would further restrict events and extend the areas where mask-wearing is mandatory to include all shops and public buildings.

People sit outdoors during a night out in Soho in London's West End on Saturday. Source: AAP

The Czech Republic meanwhile registered 1,541 new cases on Saturday, posting a record growth for the third day in a row.

"If the epidemic keeps growing in this explosive way, we will get to the very limit of our hospital capacity," epidemiologist Roman Prymula told Czech Television on Sunday.

READ MORE
France reports more than 10,000 new coronavirus cases in one day as 'yellow vest' protesters return to the streets

France reported 10,000 new infections on Saturday, close to the peak of the first wave in April, however the number fell to 7,183 on Sunday.

However some countries were relaxing their anti-coronavirus restrictions.

In South Korea, authorities in Seoul said they would ease some infection control measures introduced in recent weeks after a spike in cases in the capital region, home to half the country's 52 million population.

Coffee shops, restaurants and bakeries will return to normal service while gyms and private schools can reopen.

The country largely overcame an early Covid-19 surge with extensive tracing and testing, but it has seen triple-digit daily new cases since mid-August after weeks with numbers in the 30s and 40s.

And Saudi Arabia announced it would partially lift its suspension of international flights from September 15, six months after travel curbs were imposed.

Meanwhile, police arrested dozens of participants in an illegal anti-lockdown demonstration in Melbourne on Sunday that drew around 250 people.

The protest - the city's second in as many days - saw the crowd defy stay-at-home orders to gather at the central Queen Victoria market, where they were met by a heavy police presence.

"Many protesters were aggressive and threatened violence towards officers," the Melbourne police said.

The Australia protest followed a number of demonstrations in Germany and Poland on Saturday at which thousands protested against anti-coronavirus measures.