A Melbourne legal service has found the needs of international students and migrants from the LGBTIQ+ community are not being adequately met, as it campaigns to reduce discrimination. 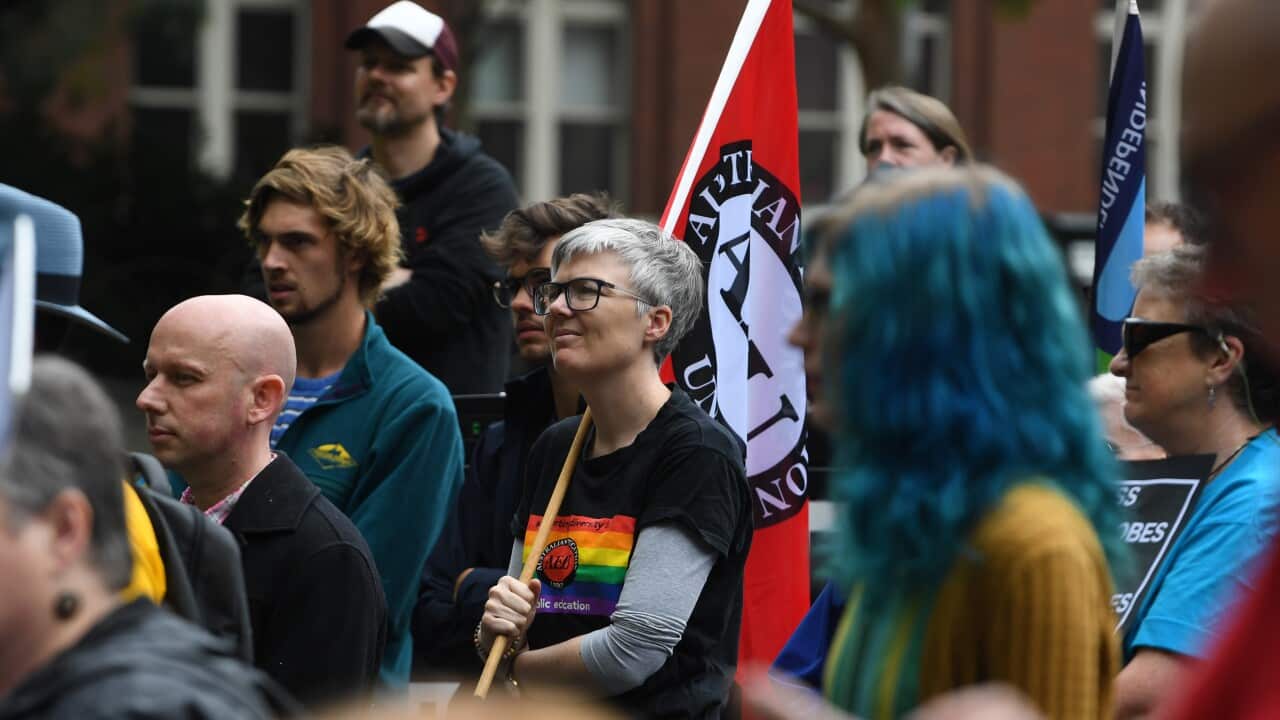 Transwoman Sally Goldner had a negative experience with the police some years ago, but it still troubles her.

Two plain-clothes police officers targeted her while she was eating lunch near a park in Melbourne, she said.

"They said, quote, 'this is a park inhabited by paedophiles, what are you doing here?' as if to imply, you're transgender, you're a paedophile," she told SBS News.

Advertisement
Ms Goldner complained about their conduct to what is now the Professional Standards Command but was dissatisfied with their response.

Ms Goldner says traumatic experiences like hers could likely to be much worse for a transperson of colour, while Melbourne lawyer Sam Elkin said those on temporary visas in Australia need extra help.

"We really do need to be able to provide culturally appropriate and inclusive legal services to migrants and international students," Mr Elkin, who works for the St Kilda Legal Service, said.

"It's a big area of unmet legal need."

"The plight of LGBTIQ people on temporary visas or seeking asylum in Victoria and around Australia is something that is very much front of mind for me," he said.

He has been pushing for his service to collaborate with the Asylum Seeker Resource Centre and migration agents.

A recent report found some LGBTIQ+ people in Victoria have a deep mistrust in the justice system.

The report, titled
Reflections on LGBTIQ Legal Need
and released by the St Kilda Legal Service's LGBTIQ branch in July, found a third of respondents would feel unsure about police support if they were a victim of crime.

The Roberta Perkins Law Project - a free legal service for trans and gender diverse people in Victoria - has been operating for almost a year through the St Kilda Legal Service.

The initiative was named after the activist and academic who fought for the rights of trans people and sex-workers in Australia and died in 2018.

Australia’s first LGBTIQ Domestic Violence Awareness Day was held this year in May, with figures showing 62 per cent of the LGBTIQ community has experienced abuse in their relationships but reporting rates are low.

"We've successfully resolved a number of discrimination complaints either by going to the Victorian Equal Opportunity and Human Rights Commission or going to the Human Rights List at VCAT [Victorian Civil and Administrative Tribunal] and we've been able to organise generous compensation payments," he said.

"People get false ideas about trans, or believe that they can, and almost have a right to, discriminate against us," she said.

"So certainly there is demand for us, but what it does on the positive side, if you’ve got people who are aware of the broad brushstroke issues already who understand the needs of trans people and what is going to make an inclusive service, we can then come in and get directly down to our issues."

A recent analysis by St Kilda Legal Service's LGBTIQ+ service of more than 300 people over two years showed 35 per cent of respondents have experienced an employment law issue.

It has been hoping these results will form the foundation to change workplaces practises through inclusion training for staff.

Outside the workplace, lawyers said the gender diverse community also need support to avoid evictions because many had insecure housing arrangements. And in the prison system, the legal service said most transgender detainees had been incarcerated in the wrong jail setting based on how their gender is identified.

Mr Elikin said trans prisoners have been dealing with harassment and discrimination while behind bars such as limited access to healthcare.

"Not being able to get prescriptions for hormone replacement therapy where they might have been accessing that in the community, that's actually been a really big area of our work over the past 12 months," he said.

The Victorian government has committed to providing $540,000 funding for the St Kilda Legal Service to continue its specialist support, particularly when there is an increased need during the coronavirus pandemic.

Victoria Police said the force has come a long way in its relationship with the LGBTIQ+ community and it was committed to building this future relationship.

"We want all members of LGBTIQ communities to have a positive experience with Victoria Police whether they approach us for help, see us in the street, or work within our ranks or aspire to do so," a spokesman said.

In a statement, the New South Wales attorney-general said the state government was committed to an inclusive legal system. It added that $500,000 has been provided to the Inner City Legal Centre in Sydney's Kings Cross, which includes a statewide service for trans and gender diverse people.

The state government also said was it allocating money for work with agencies to help prevent domestic and family violence experienced by people LGBTIQ+ people.

The Northern Territory's attorney-general said its legal support was accessible to all and the government has worked to create safe, vibrant and inclusive communities.

To find out more about the Roberta Perkins Law Project click
here
.