The number of Australian visas being cancelled on character grounds has soared since the government's laws were amended. Nearly 1,300 New Zealanders have been deported since January 2015. 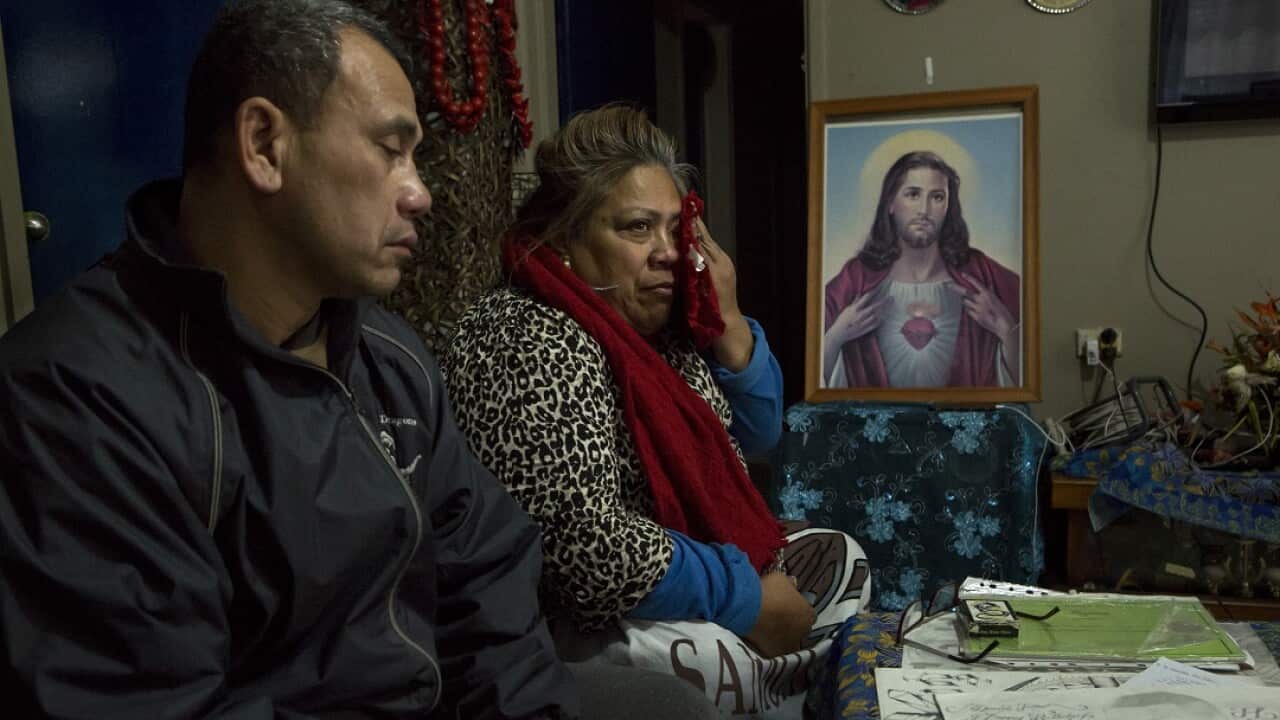 Tregear, NSW, Australia. Vaea Togatuki, left, and his wife Atagai, look over items left by their son when he died in prison, Australia, June 2, 2018. Source: The New York Times

On the night of September 11, 2015, security cameras in a prison in Goulburn, a city southwest of Sydney, recorded a final, desperate act.

A dark pool of blood and water spilled out from underneath a locked cell door. Alone inside, Junior Togatuki, 23, was bleeding heavily from a cut to his left wrist. He had sounded the alarm twice, but no one had come to his aid.

Togatuki, a New Zealand citizen of Samoan descent who had moved to Australia when he was 4 and who had a history of mental illness, was found dead the following morning.

Advertisement
He had been due to be deported.

The cancellation of Australian visas on the grounds of “character” has soared since December 2014, when the government amended its immigration law. Last year, more than half of those visas belonged to New Zealanders, almost 1,300 of whom have been deported since January 2015. They are now the largest group in Australia’s immigration detention centres, whereas before the legal changes New Zealanders were not even in the top 10.

Under the stricter character test, foreigners may be deported from Australia if they have served 12 months or more in prison or if immigration officials believe they pose a threat to the country. Many of them have lived in Australia for most or all of their lives, leaving families behind.

In some cases, convicted criminals have finished their sentences only to find themselves back in detention because their visas were cancelled.

In undated photo provided by family, Junior Togatuki, who died in an Australian prison, still serving time despite finishing his sentence. Source: HANDOUT

The shift in policy and its disproportionate impact on New Zealanders — along with additional disputes over Australia’s immigration policies — have become a major test for one of the world’s closest bilateral relationships.

Questions of race and fairness are intensifying: Of those sent back to New Zealand from January 2015 to April of this year, at least 60 per cent were Maori or Pacific Islander, according to figures obtained through an information request.

Those returned also include a former soldier with no criminal record and a quadriplegic man who lived in Australia for 36 years, while in March a 17-year-old boy was placed in an adult detention centre 12 hours away from his family — the youngest New Zealander yet to be detained.

Australian officials defend the approach. In an emailed statement, a government spokesman said the deportation measures had been introduced to “protect Australia and its citizens.”

But New Zealand officials say Australia is undermining the two countries’ historical bonds of “mateship,” with free movement across their borders dating to the 1920s.

They argue that the new measures are sweeping, allowing the deportation of people who served sentences decades ago or who served multiple short sentences for minor crimes that add up to 12 months or more.

She said in an email that she had “continued to make it clear that my government would welcome an end to some of those cases where, from our perspective, it makes no sense for someone to be deported here, such as when they have little or no links to New Zealand, or have never even been here.”

Many New Zealanders see a pattern of Australia pushing away its closest ally.

In 2001, Australia passed measures making it harder for New Zealanders to become citizens. Now they must first get permanent residency, a costly process with narrow requirements that are difficult to meet.

A new pathway to citizenship, offered to certain New Zealanders starting last year, has a similarly strict set of criteria, including an income threshold.

Australians living in New Zealand — 22,470, according to 2013 census figures — fare better. They are granted permanent residency on arrival and can apply for citizenship after five years. They can also become eligible for unemployment support and student loans.

In Australia, many New Zealanders now lack that kind of safety net. Policy changes in 2001 and subsequent years restricted their eligibility for a number of social security benefits, including unemployment and disability support.

Although they still have access to Australia’s universal health care system, they have mostly been unable to get student loans, and without a clear path to citizenship, many remain in limbo, living permanently on temporary visas that allow them to work but offer limited protections if they lose their jobs.

Junior Togatuki’s older sister, Jean Veu, said their parents moved to Australia because they wanted more opportunities for them.

Vaea Togatuki after visiting the grave of his son Junior, who died in 2015 in an Australian prison, where he was being held by immigration officials. Source: The New York Times

But citizenship, a steppingstone to stability, is increasingly out of reach. Only 8.4 per cent of the 146,000 New Zealand-born migrants who arrived in Australia from 2002 to 2011 had acquired Australian citizenship by 2016. The rate for New Zealand-born Maori was even lower, just under 3 per cent.

In the same time period, incarceration rates for New Zealanders climbed. From 2009 to 2016, there was a 42 per cent increase in New Zealand-born prisoners in Australia, according to the Australian Bureau of Statistics.

Some experts believe this is part of a broader pattern.

The 2001 changes, Hamer argued, were in part “aimed at filtering out Pacific Island migrants” who had easy access to New Zealand citizenship and were seen to be exploiting a “back door” to Australia.

Australian officials are so concerned about that “back door” that last year they rejected New Zealand’s offer to accept refugees from Australia’s controversial offshore detention camps on Manus Island and Nauru — even though it would have helped end a lengthy struggle over where to send them.

Meanwhile, in New Zealand, a small country already struggling with surging homelessness, the deportations are becoming a serious burden.

“It crept up on us quite suddenly,” said Tui Ah Loo, chief executive of PARS, a charitable organisation that supports both deportees with criminal histories and domestic prisoners.

From July 2017 to May of this year, PARS assisted 221 deportees, up from 144 in the previous financial year. Many have no family or support networks and need help with basic tasks like setting up bank accounts, getting driver’s licenses and finding places to live. Committing new offences is also a concern.

Jason Wereta, 46, said returning to New Zealand after 25 years in Australia has been difficult. Wereta, a father of four, was deported last year after serving a string of prison sentences for driving without a license, common assault, and stalking or intimidation.

He recently moved to New Zealand’s South Island to take a job shearing sheep. But like many deportees, his children are in Australia, where he hopes to return.

This separation of families needs closer examination, according to New Zealand officials.

While Ardern acknowledged that Australia had a “sovereign right to set its own immigration policies,” she said the ties that people have to Australia should be given greater weight in immigration decisions.

The question at issue is a common one: Who is ultimately responsible for long-term residents of a country?

In January, for example, it was reported that Alex Viane, a convicted criminal, would be deported to New Zealand despite never having been there. Viane, 41, was born in American Samoa and moved to Australia when he was 14, obtaining New Zealand citizenship through an uncle. His partner, two daughters and two grandsons all live in Australia.

Lafaele Stowers, a New Zealand citizen originally from the country of Samoa, is in a similar position. He has lived in Australia for 12 years and has two young children with his partner, Renay, and a 9-year-old son from a previous relationship. She and all three children are Australian citizens.

In December 2016, Stowers, 32, was preparing to go home after serving six months of a 14-month sentence for assault when he was told his Australian visa had been cancelled.

“You just freeze. You don’t know what to do,” he said by cellphone from his room at the Sydney detention centre where he has been for more than a year.

When foreigners’ visas are cancelled, they can leave Australia voluntarily or lodge an application for appeal within 28 days. If they appeal, they must wait in detention centres for their cases to be heard.

Malcolm Turnbull, the Australian prime minister, described the process as “fair and just” during a meeting with Ardern in March. Yet almost 20 per cent of those in detention have been there for more than 730 days, government figures show.

Relatives of Togatuki, the detainee who died while waiting to be deported, say he should not have been in a maximum-security facility where he had endured lengthy periods in solitary confinement.

His sentence had expired more than a month before his death, but he continued to be held at the direction of the Immigration Department.

Vaea Togatuki visits the grave of his son Junior, who died in 2015 in an Australian prison, held by immigration officials after finishing his sentence. Source: The New York Times

His family acknowledges that he was troubled — he was sent to juvenile detention at 16 and was later convicted of armed robbery and assault. But his mental health deteriorated in prison, with doctors saying he had schizophrenia. Relatives said they learned the extent of Togatuki’s issues only after he died.

“If we had known, we could have helped him,” said Veu, who saw her brother’s mood and behaviour grow more desperate after his visa was cancelled.

In a letter to Immigration Minister Peter Dutton, Togatuki wrote: “If I was to be deported back to New Zealand, I will be truly lost with myself. I have no one there, no job, no home or a roof over my head.”

Togatuki liked to draw, so his family designed a custom tombstone for his grave that incorporates his artwork. Almost three years after his death, they are close to paying off the $12,000 cost.

In the meantime, they bring a tall white cross when they visit the suburban Sydney cemetery where Togatuki is buried, in the country he didn’t want to leave.