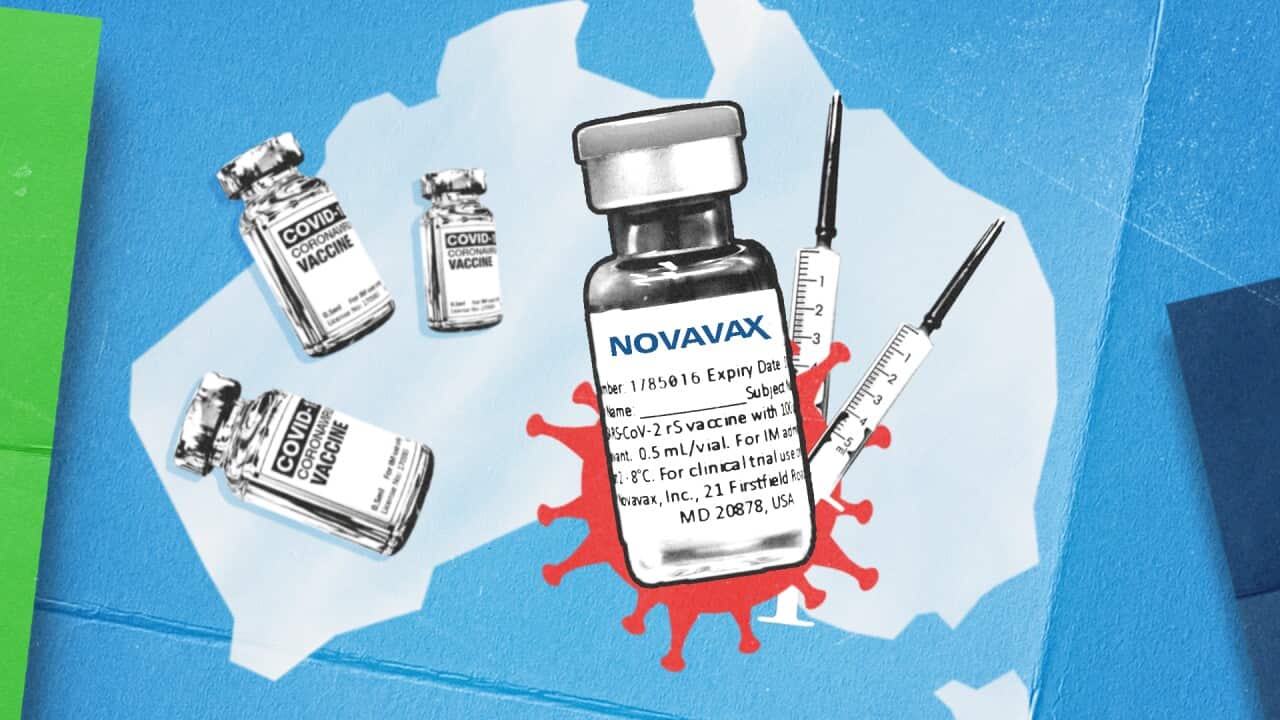 The Novavax COVID-19 vaccine has been provisionally approved by Australia after showing promising results in clinical trials. With more than 90 per cent of the country now vaccinated, there are hopes its approval will convince the remaining vaccine-hesitant few to finally get jabbed.

How does the Novavax vaccine work?

Novavax is a protein vaccine – it uses inert protein fragments of the COVID-19 virus to trigger the body’s immune response.

Advertisement
This mechanism makes it different to the Pfizer, Moderna, and AstraZeneca vaccines that are currently available in Australia.

“At the moment in this country, we're using mRNA vaccines in form of Pfizer and Moderna, and also a viral vector vaccine AstraZeneca,” infectious disease expert Paul Griffin said.

“And what they do, essentially, is deliver the instructions to make the spike proteins - the part of the virus we want a response against.

“With Novavax, it’s a slightly more traditional way of making a vaccine, where we basically make those spike proteins in the laboratory and deliver those into peoples arms so we get a response that way.”

Has the vaccine been trialled in Australia?

Yes. Dr Griffin was involved in early-stage clinical trials of Novavax that were carried out in Australia.

While Novavax had suffered some setbacks in the approval and manufacturing process, none of these related to the safety of the vaccine, he said.

“Novavax have had some difficulties, but none of them related to safety or concerns around efficacy.”

“It was largely relating to the conduct of the clinical trials and getting enough people in to be as confident as we need to be.”

How safe and effective is the Novavax vaccine?

Novavax was first approved by Indonesia in early December. It has since been approved by the European Medicines Agency, and for emergency use by the World Health Organisation.

“They’ve done lots of clinical trials now around the world – just gathering that data on the product was important.

“It depends on which group you look at, but it’s around 90.4 per cent effective against symptomatic COVID, which is really, really high.”

Who has been 'waiting for Novavax'?

Novavax was first approved by Indonesia in early December. It has since been approved by the European Medicines Agency. Source: AP

“We know that some people have waited for this vaccine,” Health Minister Greg Hunt said on Thursday.

“Although we have encouraged everyone to proceed, we recognise that as a fact.

“Hopefully, this will encourage those people in the less than last five per cent to come forward.”

Dr Griffin said some people appeared more comfortable with Novavax because it was made with an established manufacturing process.

“It is based on a different platform, and for some people, that’s the one they would prefer – and so it’d be great if those people go out and get the vaccine as soon as it’s available.”

What about the other vaccines?

Dr Griffin emphasised that the existing vaccines are also safe and effective.

“We simply wouldn't use a vaccine in this country if it didn't have an exceptional safety profile and very high rates of efficacy, and that's indeed the case for the vaccines we're using so far.”

When will Novavax be available?

Novavax has been granted provisional approval, which broadly means it has been deemed safe to use while further research is conducted.

The Australian Technical Advisory Group on Immunisation will now review the decision and, subject to its approval, Novavax will be made available in the coming weeks.

The TGA says Novavax has been recommended for people who are 18 or older, and should be given in two doses, three weeks apart.

Read more stories in the Vaccine in Focus series
.