As coronavirus fatalities are expected to peak in New York this week, these Australians told SBS News why they have decided to stay put, or feel like they have no other option. 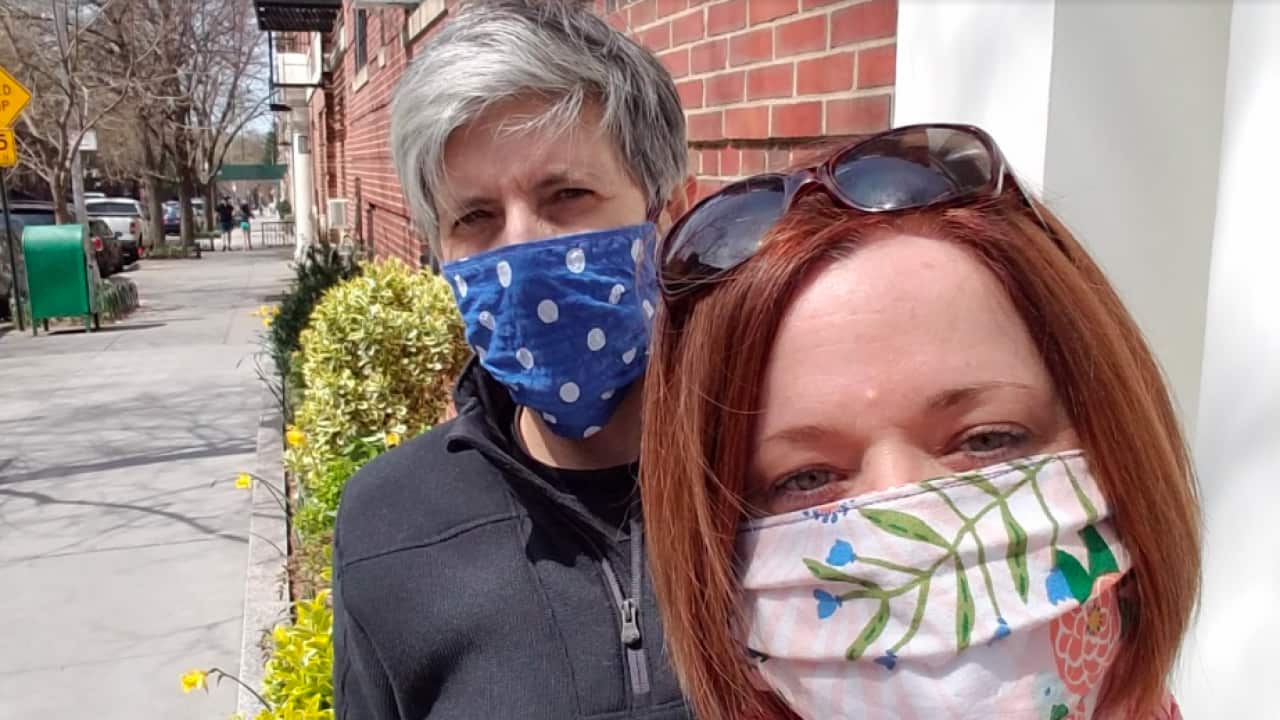 When Robyn Sunderland arrived back in New York on 3 March after visiting her family in Australia, the US had only recorded 80 cases of coronavirus.

US President Donald Trump has warned this week will likely be “the toughest” yet for New York, with both confirmed cases and deaths expected to peak within the next few days.

Advertisement
Ms Sunderland, who is originally from Victoria, and her wife Elisabeth Vincentelli, can now count 16 friends who have been diagnosed with the virus.

“We're located 10 blocks from a large hospital so we can hear the ambulance sirens as they go past all day and all night - it’s unsettling,” Ms Sunderland told SBS News from their Brooklyn apartment.

“Now, when you go out, it’s really quite eerily frightening, like a post-apocalyptic movie where everyone’s walking around with masks.”

The couple has taken to sewing their own masks and using a sanitising spray on all of their deliveries before bringing them inside.

They have had to queue up for as long as three hours to get into their local grocery store, which is only allowing 30 customers inside at once.

Ms Sunderland and her wife, both of whom work in the performing arts industry, have discussed returning to Australia but ultimately decided to stay put in the city they have called home for 20 years.

“We have friends, we have jobs, we have a whole life here, but it was really tempting to go back particularly because I know Australia’s health care system is so good and because we’ve got a smaller population," she said.

"You can pretty much go to any hospital and be assured of a bed and perhaps a ventilator, whereas here we’re at capacity now.”

Too risky to return

While Ms Sunderland’s many years in New York means she has a strong support network to rely on, other Australians are not as fortunate.

Amanda Fletcher relocated from Sydney to New Jersey, just next to New York, in January with her husband and two children.

The family packed up and moved when her husband Rupert was offered his dream job with a consumer goods company.

Their 15-year-old daughter Megan lives with genetic condition cri du chat syndrome and is considered a high-risk candidate for contracting COVID-19, which means returning to Australia is not as simple as booking a flight.

“She is partially tube-fed, she uses sign language and body language and gestures to communicate … and she needs a wheelchair for long or complicated transport,” Ms Fletcher said.

“We are planning to stay because the risk of flying with Megan and being in contact with the virus is too great. We are scared if Megs gets it that [the hospitals] will not use their resources to treat her.”

Ms Fletcher contacted the Australian consulate in New York for special assistance but said she was told it was up to the family to make their own way home.

Instead, the family is staying put and taking every precaution to stay free of the coronavirus.

“Our furniture arrived in late March and we left everything in the basement for three days in case it had been in contact with the virus,” Ms Fletcher said.

“We’ve only shopped twice in 28 days, and we have no real-life contact with anyone. We won’t even touch parcels or mail that are delivered for three days or without disinfecting them.”

‘Should I stay or should I go?’

Josh Pugh, better known online as America Josh, has managed an online community for thousands of Australians in New York since he moved to the city from Adelaide three years ago.

With uncertainty growing in New York over COVID-19, many Australians have been reaching out to Mr Pugh for advice.

Josh Pugh runs an online community for Australians in the US. Source: Supplied

“The majority of the discussion is around the idea of ‘should I stay or should I go’ and what are the advantages or disadvantages of each, because there’s no knowing,” he said.

“They just want someone official to say ‘this is the official message from the Australian Government, this is what you should do,’ because it’s very confusing.”

Mr Pugh said there had been a lot of concern in particular from recently arrived Australians whose visas may be dependent on them working a certain number of hours per week.

“If you don’t have the network, if you don’t have the relationships that you can rely on with friends, even just as social support, they’re finding it a lot more difficult and they’re the ones reaching out to me asking ‘should I be postponing this for three to six months?’”

'Return if you can'

The Australian consulate in New York has urged Australian residents to seriously consider whether they have access to sufficient healthcare and finances should they fall ill in the US.

If the answer is no, their advice is to return home as soon as possible.

“Healthcare in many states, especially in New York, is under pressure,” the consulate told residents earlier this week via social media.

“Flights are limited and costs are rising. Please don’t delay your departure if you choose to leave.”

The Australian Government has advised citizens choosing to remain overseas to follow the advice of local authorities.

“If you’re already overseas and wish to return to Australia, we recommend you do so as soon as possible by commercial means,” the Department of Foreign Affairs told Australians last month.

Australians citizens returning home will be forced to self-isolate in a hotel room for 14 days before they can return to the community.