Why these First Nations men are writing letters to their sons

A new book, ‘Dear Son’, released ahead of Father’s Day, aims to challenge stereotypes of what masculinity means for Aboriginal and Torres Strait Islander men through a series of heartfelt letters. 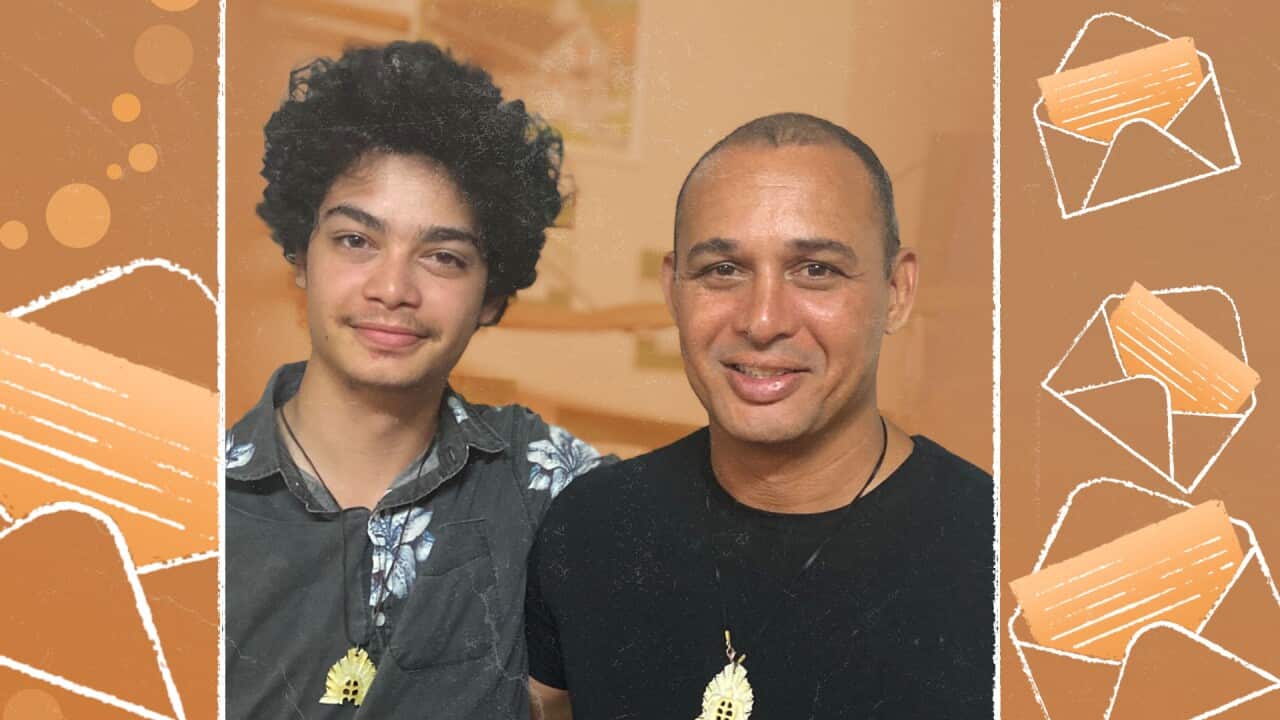 The author describes himself as “a father of five and a deep thinker”.

“I’m always thinking about human behaviour and how humans react to certain circumstances and events,” he says.

Advertisement
It was a conversation with Wiradjuri woman and Miles Franklin Literary Award winner Tara June Welch which inspired him to write a book about fatherhood, as well as reading The Fire Next Time by James Baldwin.

Thomas Mayor with two of his children. Source: Supplied by Thomas Mayor

“I wanted to create a compilation of deeply personal letters by Indigenous fathers and sons, written to sound like they were being read aloud,” Mayor says.

But first, he had to push aside the self-doubt and stereotyping he’d experienced during his own childhood.

“Dear Son became an act of defiance written to defy the stereotypes.”

Mayor reached out to men from across the country - some he knew, others he cold-called - and sent them an early draft of the letter he was working on to help them understand how honest he wanted them to be.

“I wanted people with something important to say,” he says. “A mixture from high-profile to entrepreneurs, from sportsmen to businesspeople.”

READ MORE
Children's books must be diverse, or kids will grow up believing white is superior

“The book is about celebrating Indigenous men for the things that we can celebrate and should celebrate but haven’t been able to celebrate in the past.”

“Aboriginal fathers have an entire spectrum of experiences that are culturally unique,” he says. “They provide insight and class perspective and you don’t often see those experiences in print, even to this day.”

Latimore had six weeks to write something, but while he had some initial ideas, it was the death of his favourite uncle that helped him to realise what he needed to say.

“My cousins told me he didn’t have long, Melbourne had just come out of a COVID-19 lockdown, and I had to drive 17 hours straight to get to my family’s Country near Port Macquarie,” he says.

He arrived just in time to see him before he passed.

On the drive back, Latimore thought about the words he wanted to share with his five-year-old son.

“My great uncle was one of my important father figures who taught me a lot about our culture,” he says.

“I wrote my letter so my son can carry it with him.”

“He loves books and I read it to him at nighttime. I will leave it on his bookshelf and he can carry that copy with him as far as he wants to.”

'We all need role models'

Arrernte and Luritja man Johnny Liddle - a father and grandfather - says he was surprised to be asked to contribute to the book.

“I was initially cautious about writing a letter and what people would think of me putting my thoughts out in public,” says Liddle, who has been the manager of Aboriginal men’s health service Ingkintja for more than 15 years.

“But Thomas gave me lots of encouragement and was very patient with me.”

“No matter who we are we all need guidance and strong role models,” he says.

“These are my feelings and I hope my boys get something out of it as well as those who read it.”

“It’s tough out there for the young men of today with so many things to lead you astray. I want to give them the benefit of my knowledge and experience. To share some of the Elders’ knowledge.”

Mayor hopes the different perspectives shared in his book help to change the conversations men are having. He also says the book isn't just for men or First Nations peoples.

“Like all men, we have behaviours we need to change, like masculinity, misogyny, and damaging harmful behaviours like coercive control. I want to reach out to young men and say ‘we have to call those behaviours out and stop them forever.’”

As he writes in the book: “I want you to learn to be a good man, a good partner to your loved ones, a good human being – and I want you to understand that there are more ways than one to do this, if you learn humility, empathy and how to love, the way our ancestors did”.

Dear Son (Letters and Reflections from First Nations Fathers and Sons) is published by Hardie Grant and is available now. Father's Day is marked on 5 September.

Jennifer Johnston is a freelance writer.