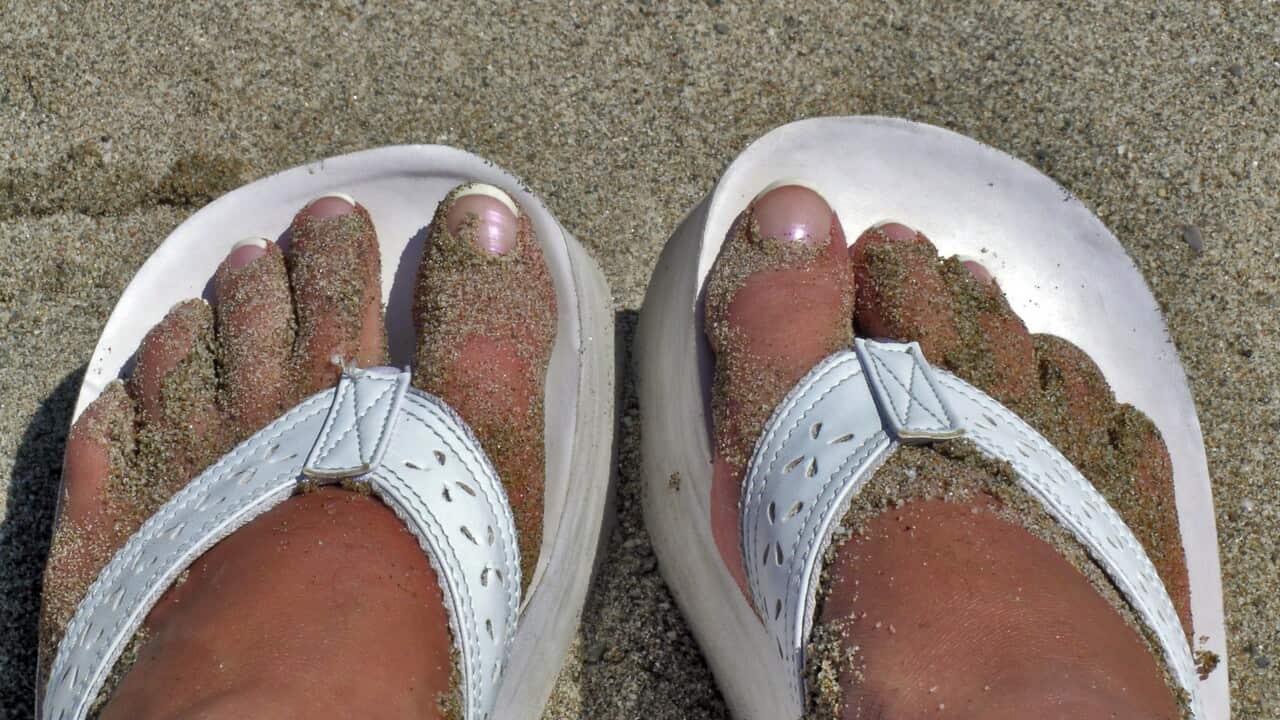 In a desperate bid to keep Foot and Mouth Disease out of Australia, politicians and farmers are pleading with travellers returning from Indonesia to throw away their footwear. Here's what we know so far.

Published 15 July 2022 at 3:37pm
By Amelia Dunn
Source: SBS News
Foot and Mouth Disease is wreaking havoc among livestock in Indonesia and there is a real fear it could infect animals in Australia, potentially ruining the livelihoods of thousands of farmers and sending meat prices skyrocketing.

Such is the concern, the federal government is spending millions of dollars to try to combat the disease in Indonesia so it doesn't reach our shores. And Australians are being encouraged to throw out the footwear they've been wearing in Indonesia before they board flights to reduce the risk of bringing contaminated soil back home.

What is Foot and Mouth Disease?

Advertisement
Foot and Mouth Disease - known as FMD - is a virus that causes severe blisters and lesions on the mouths and feet of cloven-hoofed animals including cattle, sheep, pigs and goats. The symptoms prevent them from eating and can cause lameness, and in some cases, death.

While it's not a risk to human health, people are often the carriers of the disease. They most commonly spread it via their shoes, clothes, or in their noses, where it can survive for up to 24 hours.
A man inspects cattle in Lampung province, Indonesia. Source: AFP / PERDIANSYAH/AFP via Getty Images
Australia’s Chief Veterinarian, Dr Mark Schipp, told SBS News it can have “devastating consequences”.

“Foot and Mouth Disease is a virus that's highly contagious and is easily spread between many animals,” he said. “It’s worrying in terms of trade impact, in that any country that has this disease is largely unable to export their animals and animal products.”

Why is Australia concerned?

FMD is spreading quickly through Indonesia, which until now had been free of the disease for 37 years. It’s estimated more than 330,000 animals have been infected across 21 provinces, most recently, on the popular tourist island of Bali, the closest it has been to Australia in over a century.

On Wednesday, an Australian delegation including Federal Agriculture Minister Murray Watt and Dr Schipp arrived in Indonesia to assess the situation and on Friday, Senator Watt announced the government would be spending $14 million to try to combat the disease.
Farming family Mahlah and Ken Grey and their children.
Funding includes $5 million to support strengthening laboratory capacity and diagnostic testing in Indonesia, Timor Leste and Papua New Guinea as well as supporting on-the-ground efforts in Indonesia and providing epidemiological to model the likely spread of the virus in Indonesia and the region, Senator Watt said.

A further $9 million will go towards 18 new biosecurity officers to be stationed at Australian airports and mail centres, as well as detector dogs in Cairns and Darwin. Funding will also go towards a new northern Australia coordinator to manage surveillance and preparedness strategies across the region.

What should I do if I’m travelling back from Indonesia?

With more than 100 flights to and from Bali per week, industry leaders, politicians and farmers are concerned FMD could spread before Indonesia gets it under control.

“We're quite concerned that tourists returning from Bali could be bringing in contaminated soil on their footwear or bringing back contaminated animal products such as meat or dairy products,” Dr Schipp said.

Australia has started ramping up biosecurity measures at airports across the country. Educational videos are being rolled out on flights arriving from Indonesia warning tourists that dirt on their shoes or clothes could inadvertently spread the disease.

Travellers are also being reminded to declare any items they believe might be contaminated, to avoid hefty fines. The number of biosecurity officers and detector dogs have been boosted as well.
Senator Watt said on Friday the government was now risk-profiling passengers returning from Indonesia.

"If anyone does come back in the country and declare that they have had contact with a dam or livestock, or have got grains or meat products or any of the usual things that you have to declare, then those passengers are screened as well."

Do I really have to throw out my thongs?

The federal government had previously announced it would provide $1.5 million to fund at least one million doses for Indonesia's FMD vaccine program.

"While there is a lot of attention on the travelling public coming back from Indonesia ... the highest-risk way of Foot and Mouth Disease coming back into our country is through animal products, meat products and dairy products," Senator Watt said.

But some are calling on returning travellers to ditch their shoes completely.
NSW Deputy Premier Paul Toole said this was the most fool-proof way to keep the disease out.

“For those people who are returning, it might be as simple as throwing away those thongs and getting a new pair of shoes when you arrive,” Mr Toole said.

“You do not want to be the person who brings FMD back to Australia.”

The National Farmers’ Federation has backed this call, promoting the slogan ‘Throw Your Thongs’ on social media. It’s also incentivised the move by offering a 30 per cent discount on another pair if travellers film themselves tossing their shoes.

What are footbaths and why isn’t Australia using them?

One control that is commonly used on farms and overseas to stop the spread of FMD is footbaths. They are buckets of chemicals that arriving travellers step into to kill any potential traces of the disease they may be carrying.

Mahlah Grey, a dairy farmer in Kiama in NSW, said she thinks they could be useful.

“I was really surprised that they weren't starting with the footbaths, I thought it'd be a great first step,” she said.

“I'm glad to see that there are some serious discussions going on, and I'd like to see a policy in place really quick to support keeping Australia clean of FMD.”
Shadow Agriculture Minister David Littleproud also criticised the federal government for not implementing footbaths.

“Unfortunately there is still a strong cohort that don't declare, or falsely declare that won't matter so that's why you then have to make sure that your complement and supplement that with footbaths,” Mr Littleproud said.

But Dr Schipp said while the government has considered the option, ultimately it would be impractical at airports.

“We know that many people returning from Bali don't have enclosed footwear, and if they do, it's ugg boots or sandshoes which are going to soak up a lot of the footbath chemical and that chemical is quite corrosive.”

What could it mean if it gets to Australia?

If the virus does breach Australian borders, farmers across the country could be forced to cull their herds, domestic trade would be restricted and whole farms locked down.

“We would have to immediately shut down, no people, no vehicles, no one on the farm,” Ms Grey said.

“Besides that, it would be looking at the longer-term impact of if the animals were infected. It would be devastating; our whole business would be obliterated.”

Any presence of FMD in a country also immediately puts an end to all international exports too. Given 70 per cent of Australian farm produce is exported, the estimated cost of an FMD outbreak is $80 billion. Once a country is branded as having FMD, it takes several years before trade can resume.
READ MORE
World entering 'dangerous phase': Jim Chalmers takes aim at Russia at G20 summit
For small-scale farmers like Ms Grey, it would mean the end of a long-running business.

“We've farmed here on this property for 160 years, an outbreak like FMD would be the end of that legacy,” she said.

Nowra veterinarian Andrew Havadjia said an outbreak would be “catastrophic", noting eradicating the disease could take some time, especially if it gets into Australia’s feral populations, including deers, camels and pigs.

“The biggest problem in Australia is it's a big place and we have a lot of feral animals, and if it got into those populations, we may not even be able to get rid of it and that's our biggest fear,” he said.

What happened in the UK?

By the time FMD was detected in the UK in 2001, the disease had already spread to over 50 locations, and the results were devastating. International trade in UK livestock meat and dairy products was suspended, and major events were cancelled to stop the spread, including the general election.

The disease decimated the economy, costing around $13 billion. In the seven months it took to eliminate the virus, more than six million sheep and cattle had to be killed.
More than six million sheep and cattle were destroyed in the UK to control Foot and Mouth Disease. Credit: Tom Stoddart/Getty Images
The UK’S National Farmers’ Union said most farmers were still disturbed by the events two decades ago.

“The Foot and Mouth outbreak in 2001 was devastating for British cattle and sheep farmers and will never be forgotten by those who lived through it,” it said.

How much does this mean to farmers?

"It's hard enough when you have one cow die," he said.

"Culling entire herds would be heartbreaking."
Daniel Cochrane says he would probably sell his NSW dairy farm if FMD took hold on his property. Source: SBS News / Amelia Dunn
He and his brothers run several dairies in Nowra on the New South Wales south coast and their businesses have survived drought, fire and flood.

“A lot of us are already on edge from a mental health perspective, and financially a lot of people are already hurting,” he said.

“If FMD got in, you'd probably see this farm on the market.

“I couldn't do it. I'd be out. I think I'd sell the farm.”
"We need the travelling public to take this seriously," Senator Watt said.

"If foot and mouth disease gets into our country it will be a devastating blow for our agricultural industry, particularly our livestock industry."

What is monkeypox and how is Australia responding? Here's what we know

Inflation has surged to a 21-year high. What is it and why does it matter?