As countries continue to impose nationwide lockdowns in a desperate effort to curb the spread of COVID-19, four women from Spain, Colombia, Hong Kong and the Torres Strait tell SBS News how it is impacting them, their families and their careers. 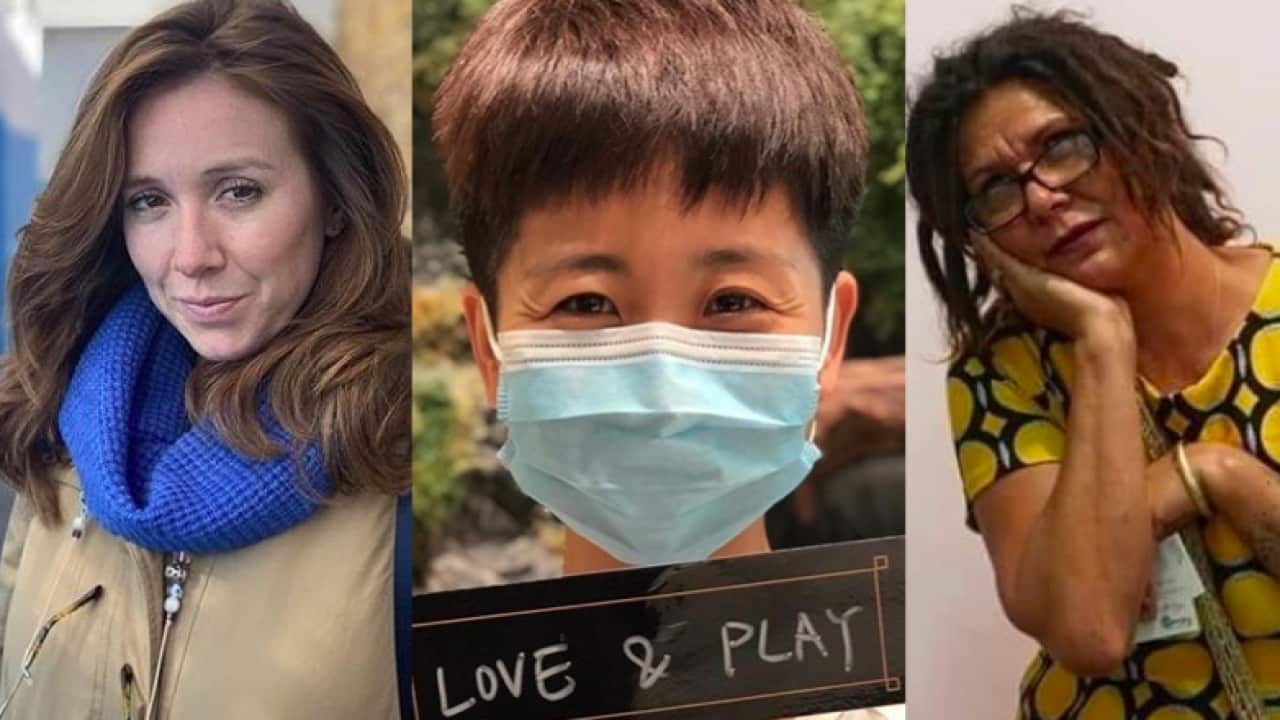 María, Maggie and Matilda have all been impacted by COVID-19. Source: Supplied

Spanish actress María Albiñana has been in self-isolation in the coastal town of Valencia for nearly three weeks.

Advertisement
The 35-year-old said she is “utterly heartbroken” for her country. Spain’s number of cases and fatalities due to COVID-19 has now surpassed China.

After living in Australia for a year, María had returned to her home country for the spring wedding she had always wanted in March, but had to cancel.

“We made the decision before we went into lockdown because we had people flying from Australia, the UK, the US,” she said.

“Things just started to get really scary and we said ‘let's cancel’, you know, and five hours later the country went into lockdown.”

María is now self-isolating with her Australian fiancé and his mother indefinitely.

“[We’ve had to make] major life adjustments,” she said.

“We've decided that we don't even go grocery shopping. We found this lady who is amazing - right now she's my hero - she does the shopping for us and delivers it, so that's amazing."

María says she misses seeing her own mother.

“My mum lives five minutes away from my house and I’m not allowed to see her. I don’t want to go over there because I just don’t know if I’m infected or not, and she’s a person of high risk,” she said. “It’s a little bit sad but we’re OK.”

Matilda Nona lives on the remote island of Badu in the Torres Strait.

She said all the Torres Strait Islands have shut their borders in an effort to prevent the virus from entering the region, and so far, it has been successful.

Aboriginal and Torres Strait Islander people are among the most vulnerable to the impacts of COVID-19 and Matilda worries about the lack of local health facilities in the region.

It would be “catastrophic” if the virus reached the islands, she said.

“If someone was to get sick here, our nearest hospital is in Thursday Island, which is 40 kilometres from here. When you get sick, you have to be medevaced by chopper,” she said.

“We don't have the facilities for this virus, most people on the island have diabetes and heart disease and lung disease.”

Despite the council of Badu closing its borders, Matilda said people are still travelling between islands by boat.

“We need the army out here to protect us … People are still coming in by boat, there's no one watching them.”

Matilda’s three children go to high school in the Queensland cities of Yeppoon and Townsville, as there are no education facilities on Badu for them to be able to complete Year 12. But now they are back home and working from her living room under the Queensland Government's request.

She is concerned she won’t be able to afford to pay for their ongoing internet data use.

“That's another thing we're facing, is trying to get internet access for these kids. You know, I can't afford to buy credit all the time. They all need to do their school work online and at the moment I'm the only one with data so we are all using my WiFi,” she said.

Colombia went into a nationwide lockdown on 24 March and concerns are mounting that the country will collapse if cases continuing increasing at the rate they have been.

Isolina Marval is an embryologist and said the country physically cannot house the increasing number of patients testing positive for COVID-19.

“We are not prepared, and I think this is why the government has taken such drastic measures in a short time because they know that the health system they have and the implications that this could get out of control,” the 31-year-old said.

To keep up, Isolina said the country is developing temporary hospitals.

“I believe that neither in infrastructure, nor in medical equipment, are we prepared,” she said.

“Even now, several hotels are transforming themselves into pseudo hospitals. They are not hospitals, but they are putting up hospital beds, adapting them a bit to be able to take care of people. They are also setting up tent hospitals.”

Colombia has seen a spike in infections and deaths.

Colombia’s capital, Bogota, is at the epicentre of the country’s outbreak and Isolina said the government is taking extreme measures to try and prevent its spread.

“Here people can only go out to buy medicine, to buy food, but it also depends on their ID number,” she said.

“Each city has its own policy for those who can go out each day. There are certain people who have jobs that merit having to leave their home every day such as health employees, people who work in the supermarket, the pharmacy, security guards, can go out every day."

The coronavirus was thought to be contained in Hong Kong but residents are still being told to take precautions.

“Because of this second wave, I decided I don’t want to leave my house,” the 36-year-old said.

The Special Administrative Region of China has closed its borders to all visitors except for the residents of Hong Kong, and while restaurants, bars and many social gathering places are still open, Maggie said people are not allowed to be in groups of more than four and must keep at least a metre-and-a-half apart.

The new restrictions meant Maggie had to close the doors to her wellness classes.

“As I teach yoga and all the yoga studios are closed for fourteen days, I have to teach from home,” she said.

READ MORE
'I went on a date and got coronavirus. This is what I learnt'

Maggie says she is finding it difficult to adjust to the new way of working.

"From this week I'm exploring online classes, I'll be offering some online yoga and meditation classes,” she said.

“This will be the first week of trying it out and we will see how that goes. I tried doing it on Facebook Live and it was quite challenging."