Meanwhile over 160 million people are projected to have been pushed into poverty across the world, Oxfam said. 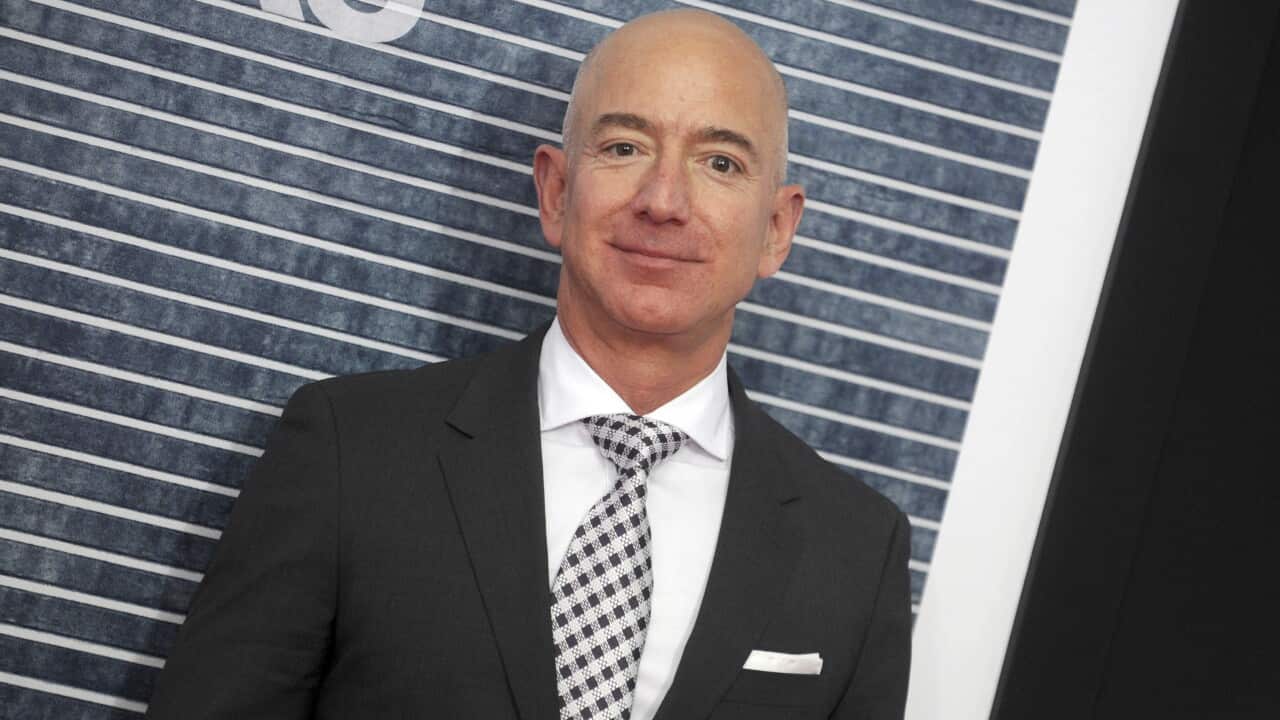 Oxfam said the increase in Jeff Bezos’ fortune alone during the pandemic could pay for everyone on earth to be safely vaccinated. Source: SBS / , STRMX

The world's 10 richest men have more than doubled their wealth since the start of the COVID-19 pandemic, a new report by Oxfam said.

This has also been mirrored in Australia, where the wealth of the country's 47 billionaires also doubled, increasing at a rate of $205 million a day.

The charity's
Inequality Kills
report coincides with a meeting of the World Economic Forum - which is usually held in Davos, Switzerland, but will be held online due to the emergence of Omicron.

Advertisement
Cassandra Goldie, CEO of the Australian Council of Social Service, told SBS News that people with the least are suffering the most during the pandemic.

She added: "I think we should be both shocked but not surprised and it's clear that Australia has overall done very well over the last 20-30 years, we know that median household incomes ... have gone up by about 45 per cent.

"But we also know that people on very low incomes have been seriously left behind because, for example, our social security system, that unemployment payment Jobseeker, has been left to just $45 a day now and yet at the same time we have just delivered eye-watering tax cuts for people on higher incomes."

The report said: "The increase in (Amazon founder Jeff) Bezos’ fortune alone during the pandemic could pay for everyone on earth to be safely vaccinated."

The report also said, in the UK and Australia, poor people and people in poorer areas have been nearly 2.6 to four times likelier to die from the disease than the richest people.

Tesla and SpaceX Elon CEO Elon Musk is one of the world's 10 richest people. Source: SBS

It calls for a range of measures to help address inequality, including one-off taxes on pandemic gains, permanent wealth taxes aimed at reducing the number of billionaires and multi-millionaires and an end to tax havens.

Lyn Morgain, chief executive of Oxfam Australia, said billionaires had a "terrific pandemic", adding: "It’s time for the Australian government to take this issue seriously and take action to close the gap between the rich and poor."

She said the government should be taxing the gains of the 'super-rich' during the pandemic and using the money  to help address inequality.

Contrasting with the success of the wealthy during COVID-19, Oxfam said over 160 million people are projected to have been pushed into poverty across the world during the pandemic.

Ms Morgain said: "Central banks have pumped trillions of dollars into financial markets to save the economy, yet much of that has ended up lining the pockets of billionaires riding a stock market boom.

“Inequality at such pace and scale is happening by choice, not chance.

"Not only have our economic structures made us all less safe in this pandemic, they are actively enabling those who are already extremely rich and powerful to exploit this crisis for their own profit.

“It’s time for the Australian Government to take this issue seriously and take action to close the gap between the rich and poor," Ms Morgain said.