In its first year of operation, a women’s multicultural cricket team has been recognised as a finalist in a national community award. 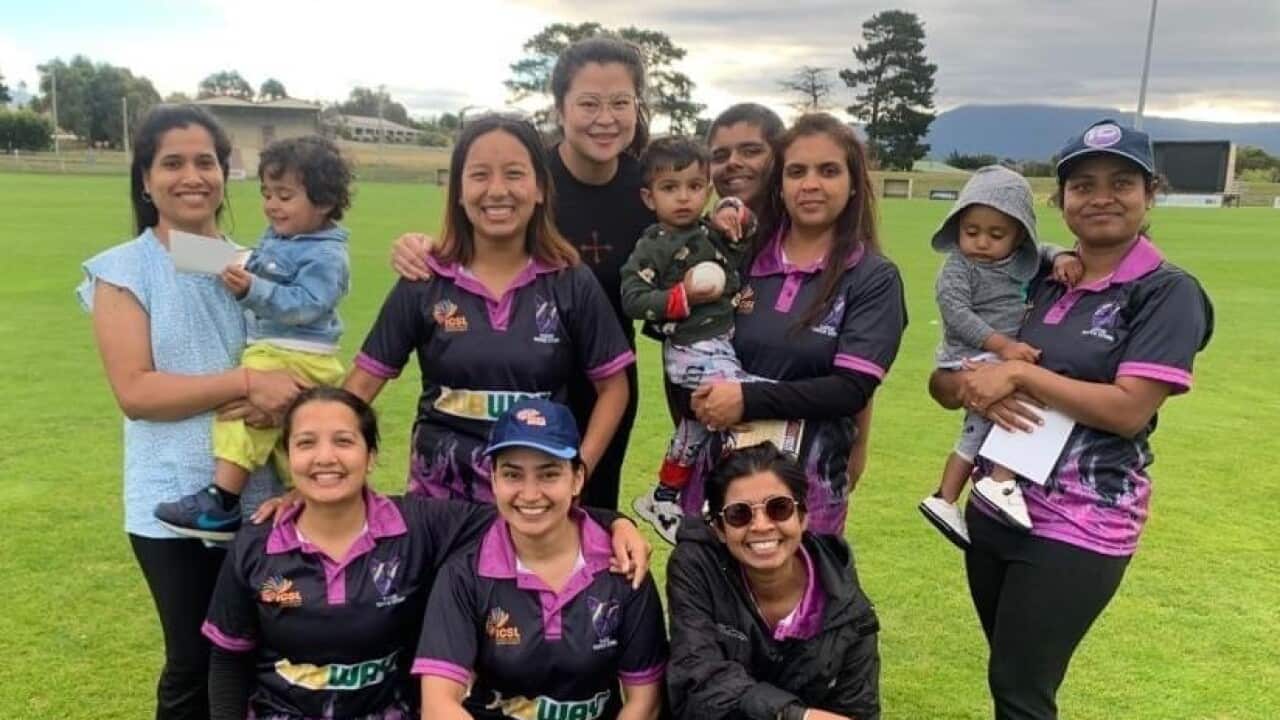 The creation of the team was championed by 27-year-old volunteer Yangi Sherpa, who moved to Tasmania in 2018. Source: SBS News / Sarah Maunder

The ‘Tassie Superstars’ - based in southern Tasmania - debuted as part of the state’s Intercultural Sports’ League (ICSL), an organisation aimed at engaging diverse and migrant communities. It has since gone on to join the Southern Cricket Association’s 2021-22 season.

Its creation was championed by 27-year-old volunteer Yangi Sherpa, who moved to Tasmania in 2018.

She approached Raj Chopra, founder of the ICSL, about developing a women’s team.

Advertisement
“I have been involved in community and volunteer work ever since I moved to Hobart, and for me it was really important to work for something that involves women, and empowering women,” Ms Sherpa said.

“It was my first time to be involved with cricket as as a sport, growing up I did watch my male friends play cricket, and I did enjoy it, but I never thought about playing it myself.”

Ms Sherpa originally planned to just to help manage the team as the women’s coordinator, but after watching the games and training sessions, she was inspired to try out the sport too.

Yangi Sherpa moved to Tasmania in 2018, and was shocked to discover there wasn't a multicultural women's cricket team. Source: SBS News / Sarah Maunder
Earlier this year, the Tassie Superstars were awarded the Women and Girls Initiative of the Year award by Cricket Tasmania.

That title qualified them as a finalist for the national award in the same category by Cricket Australia. A ceremony was held last Thursday night, and although the team narrowly missed out on the national award, their efforts over the past 12 months were highly commended.

”It was unexpected to be honest (being announced as a national finalist), and that makes it more special, because we as a team never did it for recognition, we did it for ourselves, we did it for the community, just a step forward,” Ms Sherpa said.

Tasmania’s Intercultural Sports League has existed for around seven years now, and founder Raj Chopra said the team’s national recognition will inspire other women to join the league.
Ms Sherpa says she hopes the Tassie Superstars continue to grow. Source: SBS News / Sarah Maunder
“Whether you know how to play or not, because it’s about giving it a go, and finding new friends, improve your health and learning about the sport.

“Yangi did an amazing job, getting the players motivated, supported, picking people up and dropping them off, organising training.”

According to Scott Tutton, who leads the Head of Clubs and Volunteers with Cricket Australia, there are more than 200,000 volunteers across Australia that help run community cricket organisations.

“The National Community Cricket Awards are our flagship event for making sure that we celebrate and recognise the contribution of our volunteers, and cricket clubs and cricket associations and other cricket partners across the country, and we do that annually.

READ MORE
'We don't have a voice': Royal commission hears of barriers facing women from diverse communities
“The Tassie Superstars were a fantastic nomination that came through, to go from having no women participating in that competition, to having women from all across a multitude of backgrounds, it’s just an amazing thing that Yangi and the Tassie Superstars have been able to create down there in Hobart.”

Ms Sherpa says she wants to see the Tassie Superstars continue to play seasons and grow in player numbers.

“I hope this inspires more women to join sports," she said. "There is a lot of potential for women in sports, for women of all backgrounds who have always wanted to be a part of it but never thought it was a possibility.”
SHARE
3 min read
Published 22 May 2022 at 6:31am
By Sarah Maunder
Source: SBS News
Tags
Sport