Zimbabwe has made it illegal for schools to expel pregnant girls

It is now illegal for schools in Zimbabwe to expel students who get pregnant. 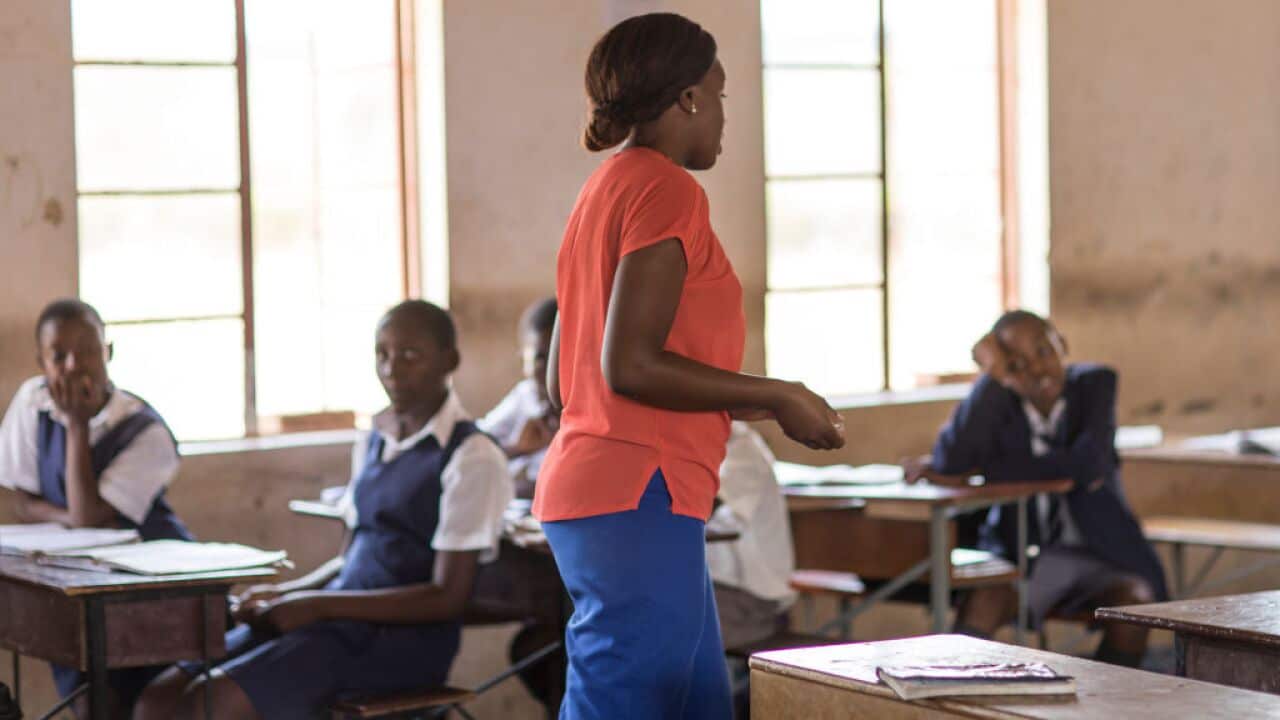 A file photo of a teacher during a lesson at a school in a rural area near Chakari, Zimbabwe. Source: Getty

Zimbabwe has made it illegal for schools to expel pupils who get pregnant, a measure women’s rights campaigners said would help tackle gender inequality in the classroom and stop many girls from dropping out of school.

A legal amendment announced last week seeks to reinforce a 1999 guideline that was patchily implemented, and comes as school closures due to coronavirus raise fears of a rise in sexual abuse and unwanted pregnancies.

Many parents of pregnant girls, or the girls themselves, decide to quit schooling due to the pregnancy, and schools do not always do enough to encourage them to stay, officials say.

Advertisement
“I’m expecting every parent and guardian and everyone else to understand that every child must be assisted by all of us to go to school,” Cain Mathema, the education minister in charge of schools, told the Thomson Reuters Foundation on Monday.

“Every child whether boy or girl... has a right to go to school in Zimbabwe,” he said.

In 2018, 12.5 per cent of the country’s roughly 57,500 school dropouts stopped attending classes due to pregnancy or marriage reasons - almost all of them girls, according to Education Ministry statistics.

A file photo of students at a school in Chakari, Zimbabwe. Source: Getty

Priscilla Misihairwabwi-Mushonga, an opposition lawmaker who chairs a parliamentary education committee, said making the previous guidelines into a law with possible sanctions would make the rules more effective and address gender disparities.

“In circumstances where the pregnancy was a result of kids of the same age, the boy would not be necessarily expelled from school,” she said.

“It was also a double tragedy for the girl... as in most circumstances, it was not a consensual sex but some sort of abuse by some predator older than her. So, she has been traumatised and raped then she is further traumatised by being kicked out of school.”

Nyaradzo Mashayamombe, founding director of advocacy group Tag a Life International and leader of a consortium of organizations that pushed for the law, said she feared lockdown measures may have caused a spike in unwanted teen pregnancies.

“We are in a dangerous time where children have been out of school for a long time. Most of them are not even attending radio and television lessons,” she said, calling for the government to ensure the new law is enforced.

Pregnancy is just one of the reasons that girls in Zimbabwe could fail to return to classes after coronavirus restrictions are lifted, said Sibusisiwe Ndlovu, communications specialist at Plan International Zimbabwe.

Poverty and early marriage will also stop some from resuming their studies, she said, welcoming the new legislation as a step in the right direction.

“This amendment is crucial in fulfilling the access to education right for all children – especially girls,” Ms Ndlovu said.

A file photo of students at a school in Banket, Zimbabwe. Source: Getty

However, campaigners in the southern African country say girls will still need extra support to continue with their studies even if they keep attending classes while pregnant.

“Especially girls from marginalised families, who will need the additional support to remain in school, and to come back after giving birth.”