As global warming forces millions to flee, here are the stories of climate refugees

Families in Bangladesh, Peru, Somalia, the United States and beyond are just some of the victims of climate change forced to flee their homes due to natural disasters. 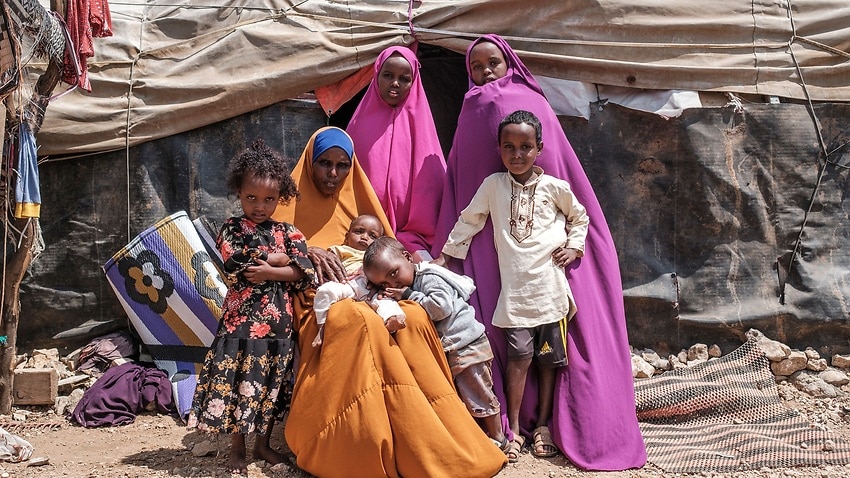 Yurub Abdi Jama sits with her children at their home in an informal settlement of internally displaced people in Somalia. Source: AFP

With the COP26 climate summit in Glasgow only days away, world leaders will be forced to discuss more than just how to meet their targets set out in the Paris Agreement in 2015.

Around the world, in both developed and impoverished countries, global warming has forced the displacement of refugees and migrants, whose lives have been changed by natural disasters.

These disasters, aggravated by human behaviour, have led to one person leaving their homes every second due to climate change. Here are some of their stories.

Bibi Salma and Mohammad Ali Asgar lost their home three times before shifting to one of Dhaka's fast-growing slums, two among millions of Bangladeshis forced to move by rising waters in the region.

Experts say that this impoverished delta nation of 170 million people is set for the biggest displacement in human history due to climate change.

"I remember how our house went completely underwater during a flood. It happened so quickly, the tip of the roof disappeared in minutes," said Ms Salma, originally from the island of Bhola 300 kilometres south of Dhaka.

"The river was ferocious. It gradually devoured all our farmland and came near our house one day ... Our orchards, homestead … nothing was left.”

The family now live in a 10-square-metre room with some cooking pots and one mattress that they all sleep on.

Bibi Salma sits with her children in Dhaka where tens of thousands of homes are being built, with more than half going to climate refugees. Source: AFP

Each home they had was lost to flooding, forcing Mr Asgar to take out loans for the next one.

Finally unable to borrow more, they left for the teeming slum on the outskirts of the capital Dhaka, a megacity of 20 million people.

The International Displacement Monitoring Centre says nearly five million Bangladeshis have been displaced internally between 2008 and 2014, and another 13.3 million people could follow them by 2050.

At the upcoming COP26 climate summit in Glasgow, Bangladesh will again highlight the challenges it is facing due to the extreme weather events, and call for international help to help adapt.

Read More
One person is displaced every second by our warming planet. Where will they go?

"But when we speak about the climate migration in the international forum, the rich nations just avoid the discussion," Bangladeshi MP Tanvir Shakil Joy said.

"The Western nations, who are mainly responsible for global warming, have yet to recognise that climate change is behind massive migration and displacement,' he said.

"They go into panic mode the moment we raise the issues of climate refugees. Their apprehension is if they recognise this they may have to accept some of these refugees."

The sheep died first, then the goats. When her only camel perished, Yurub Abdi Jama knew that her life as a herder was over, and joined the exodus from her village to the city.

Yurub Abdi Jama lives in a shanty with her husband and eight kids. Source: AFP

Her people in northern Somalia had been herding for generations, born on arid land and accustomed to drought. But they could not outlast the final, unrelenting dry spell that scorched the earth and felled their beasts.

"In the past, God would always leave something for us, but now ... We had to flee. You go where you can when you lose everything," Ms Jama said, crouched outside the shanty where she now lives, hundreds of miles away in barren hills outside Hargeisa city.

Ms Jama is a climate migrant - one of tens of thousands on the move in Somalia, where environmental extremes are forcing waves of herders and farmers off the land toward cities ill-equipped to host them.

In recent years, natural disasters have been the main driver of displacement in Somalia, ranking among the world's most vulnerable to climate change.

#ClimateEmergency in #Somalia is devastating livelihoods and driving #displacement. The race is on and we must ensure the needs of the most vulnerable people are at the top of the #COP26 in November. #WorldHumanitarianDay #TheHumanRace pic.twitter.com/VLTa5Mz1OD

Fierce and frequent droughts and floods have uprooted more than three million Somalis since 2016, according to UNHCR data that tracks internal displacement by cause.

Most refugees, like Ms Jama, arrive with nothing and drift into destitution.

Penniless, she took refuge with other newly-arrived herders in a desolate squatter camp outside town, scavenging enough to build a hut with sticks and cloth for her husband and eight children.

Somalia has experienced two consecutive seasons of below-average rain, with a third on the way.

Harvests have failed and the Famine Early Warning Systems Network warned in August that hunger will worsen by year's end, with 3.5 million people in dire need.

And the rain that does fall can prove more a curse than a blessing, with Somalia having witnessed tremendous flooding in 2020, capped by the strongest tropical storm to hit the country since records began.

"Refugio Santa Rosa", a camp of precarious straw houses and tents where thousands of climate refugees are now forced to live. Source: AFP

With her husband and three children, she went from a self-sufficient life on a fertile river bank to a straw-topped hut next to a busy highway with no access to drinking water, sanitation or electricity.

In 2017, during the warmest five-year period ever recorded on Earth, El Nino hit Peru with particular fierceness.

Torrential rains and floods claimed over 100 lives, and according to the International Organization for Migration (IOM) displaced some 300,000 people - one per cent of the country's 33 million population.

"It was like starting from nothing," the 36-year-old said as she recounted her experience at the Santa Rosa camp some 1,000 kilometres north of Lima where hundreds of families displaced by the 2017 climate catastrophe were offered refuge.

"We had to buy everything anew, a bed, wardrobes, toilet ... because the water took everything."

What was meant to be a temporary arrangement has lasted five years for about 2,000 families from villages and towns ravaged by the flooding and thrown together in a camp of ramshackle zinc and straw huts and tents.

With a cycle of every few years, the weather system causes an abnormal warming of the Pacific Ocean which in northern Peru translates into excessive rainfall and drought in other parts of the country.

The heating planet is not just creating an influx of displacement in developing countries. Refugees are showing themselves even in one of the world's wealthiest nations, the United States.

Jennifer Cashman and her family lost everything when their house in Paradise, California was razed by a wildfire - forcing them to join the growing ranks of the world’s climate migrants.

Jennifer and Ryan Cashman hold photos of the burnt remnants of their former home and belongings in Paradise, California. Source: AFP

They moved 4,800 kilometres to a new life in Vermont on the other side of the United States, far from the annual danger of fast-moving fires worsened by climate change.

"Our house and our business were completely gone. And it happened so fast, that we weren't able to really get anything out of the house except for ourselves," Ms Cashman said.

"We had a suitcase each. That's all we had to our name."

The fire that tore through Paradise in 2018 killed 86 people and ruined nearly 19,000 buildings in just one day.

On the advice of a friend, the Cashman family went to visit Stowe, a small town in Vermont and moved there with the help of insurance money in January 2019.

"We knew when the fire came that we were done; I could not live in California anymore," the 47-year-old said.

Repeated evacuations had left their scars.

California, once a dream destination for millions and home to the world's fifth-largest economy, now faces climate migration, a phenomenon previously only associated with poor, low-lying Pacific atolls threatened by rising seas or with arid areas in developing countries.

Eight of the 10 largest fires ever recorded in California have occurred since 2017 have been sparked by human-caused global warming, leaving forests dry and flammable.

According to the Internal Displacement Monitoring Centre, wildfires have forced an average of more than 200,000 people to leave their homes each year over the past decade.

Nearly three-quarters of them were in the US and the vast majority were in California.