On Thursday, Scott Morrison departs for the first official visit to the US by an Australian prime minister in 13 years. But skipping a key climate summit isn’t a good look, his critics say.

Prime Minister Scott Morrison has been accused of “cowardice and contempt” for choosing to skip a high-level climate change summit at the United Nations Headquarters in New York, being in the US at the time.

Instead, he’ll be meeting with his US counterpart Donald Trump and the two will visit the Australian-owned Pratt Industries cardboard manufacturing plant together in Wapakoneta, Ohio. Scott Morrison and Donald Trump during the G20 summit in Buenos Aires in November 2018.
AAP

“Scott Morrison knows that at this summit world leaders are being asked to more aggressively cut pollution, and to start to reign in coal, and Scott Morrison obviously doesn't want to do that, he'd prefer to hang out with Donald Trump instead”, Greens MP Adam Bandt told SBS News.

“I think it's a combination of cowardice and contempt.”

This Friday, thousands of people in Australia and around the world are expected to strike over climate change inaction, inspired by the School Strike for Climate movement. The strikes come ahead of the UN emergency climate summit on 23 September. 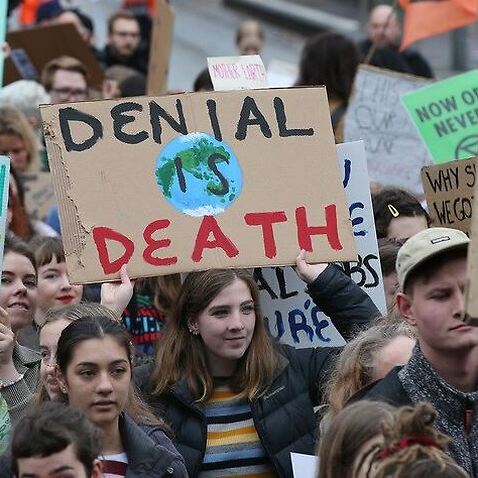 But while Mr Morrison will head to the US on Thursday, he isn’t expected to attend the summit, with Minister for Foreign Affairs Marise Payne and Australian ambassador for the environment, Patrick Suckling, expected in his place.

“It's an embarrassment to Australia but it is also going to make it harder for the world to take action because if Australia - as one of the world's largest polluters when you take into account all of the fossil fuels that we export – is not prepared to even front up to a summit and say ‘we're prepared to start reigning in our pollution’, then how can we ask other countries to do it?” Mr Bandt said.

'Australia is partner number one'

Diplomats have revealed the US is “turning itself inside out” to deliver Mr Morrison as much pomp and pageantry as possible during his six-day visit to Washington D.C, Ohio, Chicago and New York City.

It will be the first official visit to the US by an Australian prime minister since George W. Bush hosted John Howard in 2006.

The trip will include an extensive ceremonial program with fanfare and red carpet events scheduled at Andrews Air Force Base, The Pentagon, The State Department and Arlington National Cemetery, culminating with top-level meetings in the Oval Office, Cabinet Room and a black-tie State Dinner in the White House Rose Garden. “It reveals, I think, the significance that the United States places in Australia in this moment as its strategic focus returns - quite markedly - to the Indo-Pacific”, United States Study Centre CEO Professor Simon Jackman said.

“Australia is partner number one”.

“This is recognition of how important an ally Australia is to the United States.”

“It is also recognition, I think, of how we have leant forward on China, in our own way.”

Upon meeting Mr Trump asked him to explain why Malcolm Turnbull was no longer leader and told Mr Morrison: “I think it’s going to be a great relationship … I think you’ve done a very good job in a very short period of time … That’s why you’re sitting right here.” The two leaders leave a G7 summit meeting together earlier this year.
AAP

But given Australia signed on to the US-led mission to enforce freedom of navigation in the Strait of Hormuz within weeks of the two leaders sharing a meal in Japan, Mr Bandt has expressed concern about Mr Morrison’s closeness to Mr Trump.

“If there's one world leader that you shouldn't be hitching your wagon to at the moment, it's Donald Trump.”

“Who knows what wars we're going to be led into?”

Mr Morrison’s official visit comes after an SBS News freedom of information request revealed the Trump administration instigated, facilitated and paid for a high-level ‘working dinner’ on the eve of the G20 Summit in Osaka in June.

Diplomats said “the United States is courting Australia in a way it hasn’t for many, many years”, leaving some to wonder aloud (in Washington and in Canberra) what - if anything - Mr Trump might expect in return for rolling out the red carpet. “I can't help but think there won't be a big ask”, Professor Jackman said.

“You would not surprise your dinner guest with a big ask, I don't think that's the right forum to do it.”

French President Emmanuel Macron is the only other leader to be treated to a state dinner during Mr Trump’s tenure at the White House.

“Trump looks at Morrison and sees someone he can identify with - an unlikely winner, who wasn't supposed to win the election, but did; and a guy who tracks right of the aisle”, Professor Jackman said.

“Vice President Pence and Prime Minister Morrison are also both evangelical Christians and Australia is the archetype of what a good ally looks like.”

“That's true too; I wouldn't be at all surprised if there’s a gift exchange along those lines,” Professor Jackman laughs.

“Does the president refer to the prime minister as ‘ScoMo’?” Mr Morrison told SBS News the US invitation was “an honour to accept”.

“We see the world through the same eyes, with shared values and a deep commitment to promoting peace, liberty and prosperity.”

“Our alliance is stronger than ever – a partnership first forged on the battlefield, when we fought alongside one another at the Battle of Hamel in 1918.”

“Since then, we have stood side by side in every major conflict since the First World War – in the defence of freedom, liberty and democracy.”

“Our economic partnership is just as strong and this visit will further strengthen it.”

Labor Senate leader Penny Wong has called on Prime Minister Morrison to use the visit to push President Trump on the US-China trade war saying it is "not in Australia's interests".

"It is an opportunity to press for Australia's interests and one of the first things he should be doing is to be urging President Trump to end the trade war," she told SBS News.

Other topics on the table

On recent visits to Australia and the Pacific, vice president Mike Pence and secretary of state Mike Pompeo sharpened their criticism of China’s Indo-Pacific expansion, publicly condemning the ongoing military build-up in the South China Sea while dismissing Beijing’s Belt and Road Initiative as “debt-trap diplomacy”.

Having waited two years for the US to appoint an ambassador to Australia, Arthur B. Culvahouse Jr arrived in Canberra in March, calling on Australia to embrace its “power leadership role” in the region and call out “malign influences”. Mr Trump and Mr Morrison attend a dinner in Osaka in June.
AP/AAP

“The ambassador was, I think, reminding Australia not to think of itself as a small or a middle power – that, regionally speaking, we have a lot of capability, and I think trying to nudge Australia closer to doing freedom of navigation operations in the South China Sea,” Professor Jackman said.

“That is a place where successive Australian governments have chosen not to go.”

“Are we going to get pushed a little harder on an action like that, a very visible sign that we're with America?”

Professor Jackman has backed Mr Morrison’s position that Australia does not have to choose between its “friends and customers” and can maintain and balance a strong alliance with the United States and trade relationship with China.

“Australia is playing a very considered game and, I think, a pretty smart game.”

“Australia is finding a vocabulary to explain to America and to the Chinese that we are going to have it both ways for as long as we possibly can.”

“I think this is the state of the art of Australian diplomacy - finding ways to express those messages - quite pointedly - to countries that, in each way, are enormously valuable to us.”

It is widely anticipated Mr Trump and Mr Morrison will make a joint announcement regarding the procurement of critical and rare earth minerals, which are a vital part of the defence supply chain. One topic that isn’t on the agenda though, is the prosecution and extradition of Wikileaks founder Julian Assange.

Despite public calls from the Australian citizen’s legal team, Mr Morrison has repeatedly declined to raise the matter with Mr Trump during their previous meetings, telling SBS News at the G20 Summit in Osaka: “my focus is securing Australian jobs”.

“If we have such a great, close relationship we ought to be able to have these frank discussions about protecting basic principles and protecting Australian citizens.”

Brett Mason will be covering Scott Morrison’s trip to the US for SBS News. Follow him @BrettMasonNews