There are new calls for Australia to remove or amend its 'racist statues'.

As statues around the world are being toppled amid anti-racism protests, Australia is being urged to once again look at its own colonial-era monuments.

Over the weekend, a statue of 17th-century slave trader Edward Colston was thrown into a harbour in the UK city of Bristol, with statues deemed racist also being damaged around the US and Europe. 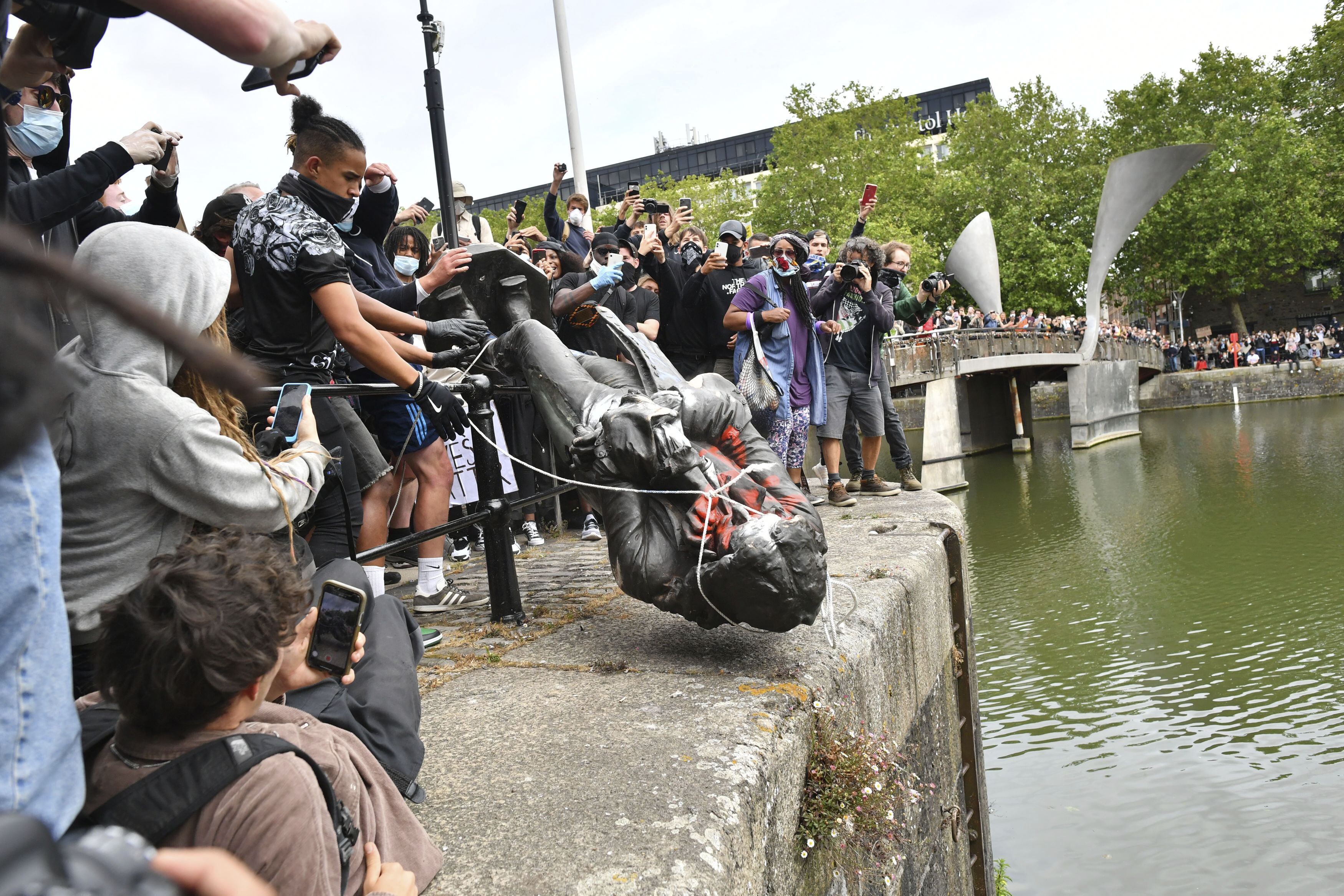 Mr Moran, a Goori man, said it was time for Australia to remove statues of individuals who have harmed Indigenous people and their culture.

"We in the local community support the removal of statues that honour racist bigots and those who have perpetrated atrocities against our people," he said.

In the past, Indigenous Australians have spoken about removing or amending statues of Captain James Cook, with broadcaster Stan Grant taking aim at how a Sydney statue credits him with "discovering" Australia. 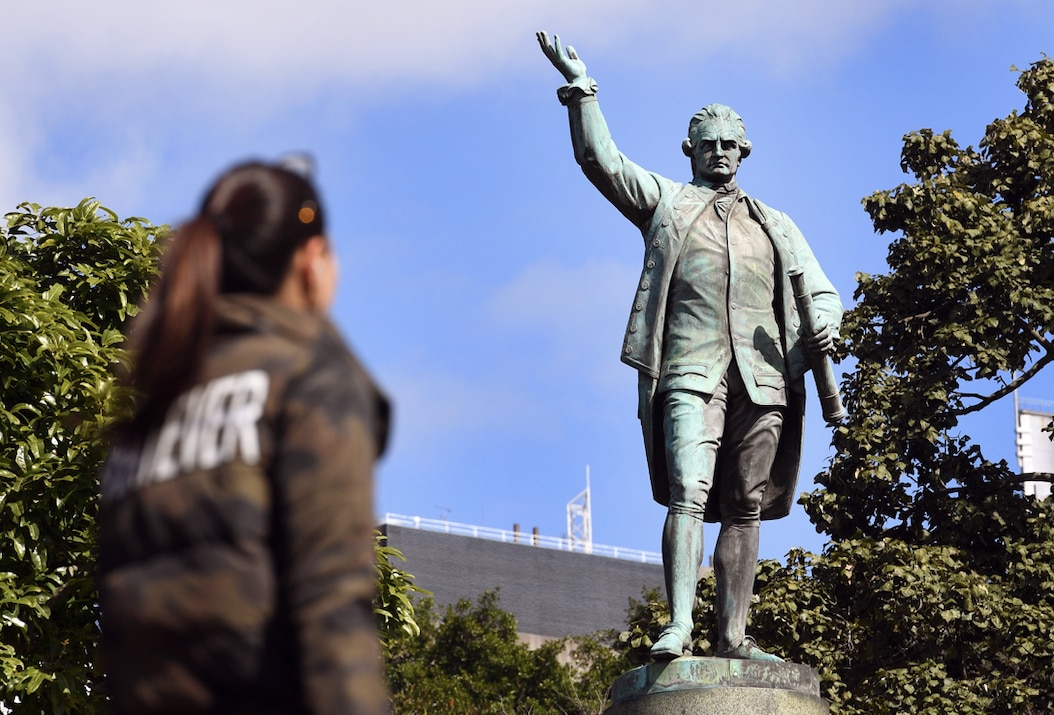 A statue of Captain James Cook in Sydney.
Getty

But Mr Moran said he was most concerned about the statues and other monuments to Lachlan Macquarie, who served as NSW governor from 1810 to 1821.

"[Macquarie] determined it was appropriate to declare war on our people, to, in his own words, 'be able to hang us from the treetops'," he said.

Mr Moran said Macquarie was "at the forefront of the genocide of our people, and the dispossession of our people".

"Our country is just not mature enough to commence decolonisation and wants to continue with the glorification of colonisation ... It's humiliating," he said.

"I challenge all Australians to gain a better understanding of who these people are and why they have got statues."

Material from the National Museum of Australia said Macquarie was known for "treating harshly those [Indigenous people] who defied the invasion of their lands, often sending out the military to capture or kill known 'offenders'."

During the 1816 Appin massacre, troops sent by Macquarie killed at least 14 Indigenous people at a camp near Appin, NSW. 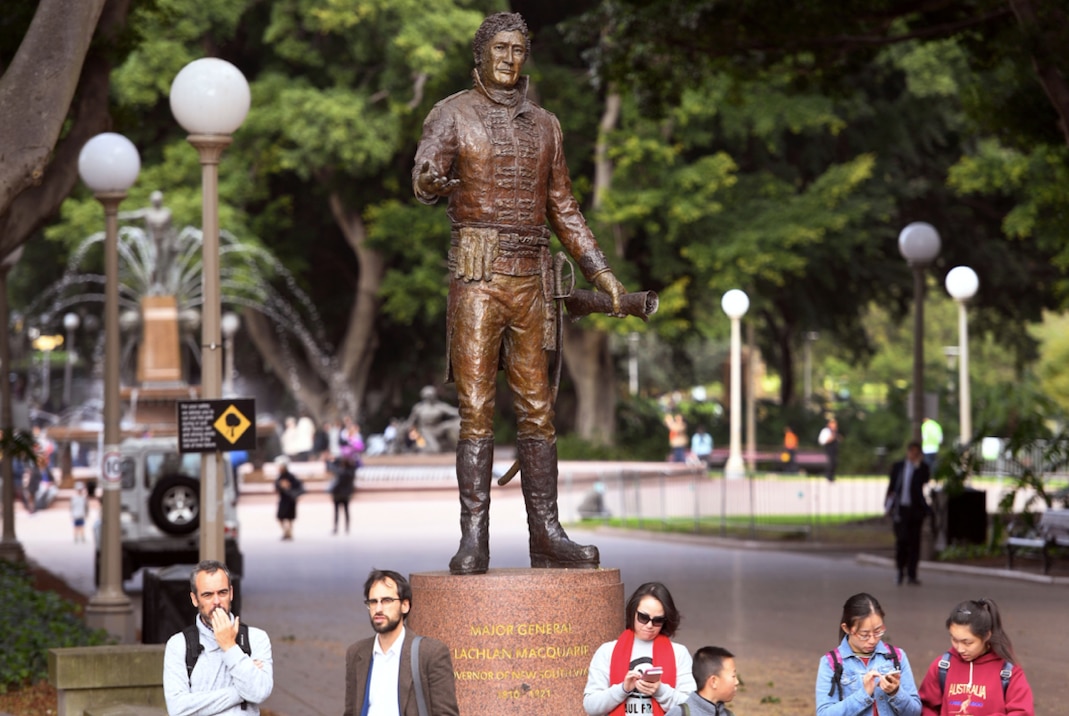 A statue of Lachlan Macquarie in Sydney's Hyde Park.
Getty

However, a co-organiser of Saturday's anti-racism rally in Sydney is not calling on Australians to start tearing down these statues.

"I don't want to promote things like this now, when we have another target that is much, much more important ... The most important thing is to fight against racism," Raul Bassi of the Indigenous Social Justice Association told SBS News. 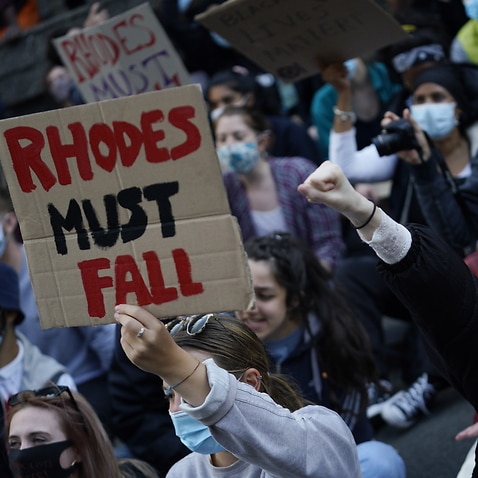 On Wednesday, London mayor Sadiq Khan said statues and other landmarks around his city would be reviewed in the wake of the protests - a move that Mr Bassi said could be done by Australian cities.

"We could convince the government, the councils to remove [these statues]," he said.

"At some point, things are going to change. The statues will better represent the people."

Despite these calls, Minister for Indigenous Australians Ken Wyatt told SBS News that these statues should not be removed.

"I don't believe removing statues contributes positively to this conversation," he said.

"These statues should remain as a reminder of a point in time in our lives – even when detrimental. They serve as prompts to encourage people to talk about history."

"As Indigenous Australians we have sought to have the true history of this nation told so that it reflects both Indigenous and non-Indigenous perspectives and history." 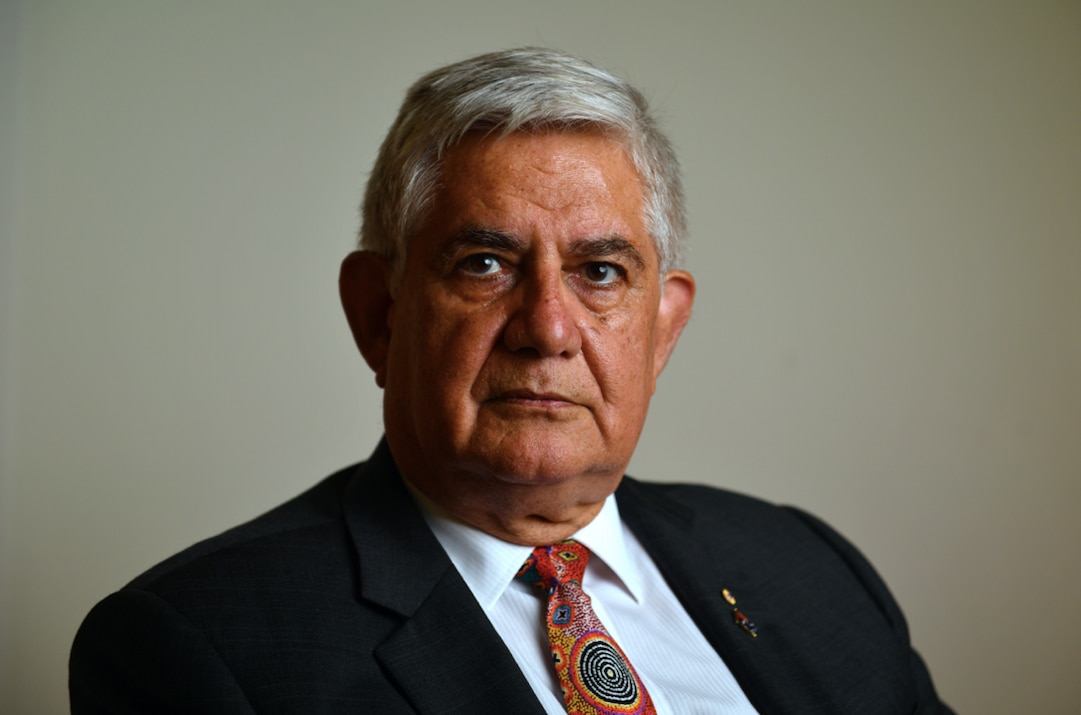 "Truth telling is not a contest of ideas but a sharing of the truth. In order for us to heal the past we need to have genuine conversations and understand the history of our nation."

Mr Wyatt said he would rather see an increased focus on our Indigenous history, and perhaps "the addition of secondary plaques or appropriate installations to provide the alternate information". 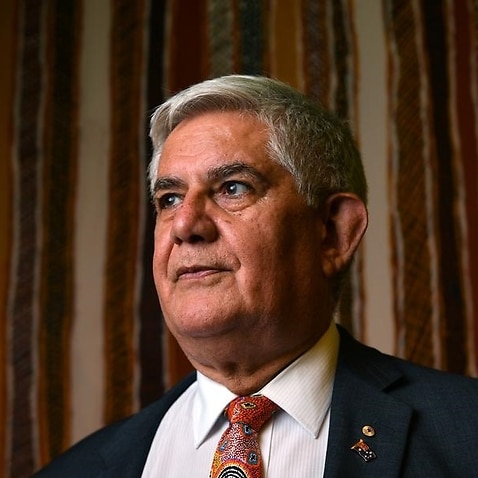 Sarah Maddison, co-director of the Indigenous Settler Relations Collaboration at the University of Melbourne, said government responses to these statues around Australia have been mixed.

"Some local councils are taking a more reflective, responsible and careful role. Not necessarily taking monuments down, but at least attempting to place them in a more historical context," she said.

She said the City of Melbourne was training their staff to help visitors reinterpret particular places and monuments in the city.

"But at the state and federal levels, I think we've mostly got government resistance. [These] governments are much more interested at playing to the uncritical, mainstream nationalist view of history which utterly disregards Indigenous experiences and perspectives."

"We have the evidence that this country was invaded and settled violently and yet we put up these statues completely without context and ask people to accept that as history. And the sad reality is most people do."

The removal and defacing of statues linked to the slave trade internationally has also put Australia's use of forced labour in the spotlight.

Bruce Scates, a professor of history at the Australian National University, said many people are unaware of this "sad and sorry" chapter of the country's history.

"Throughout the 19th century, in order to establish a sugar industry in Queensland, it was felt that the labour in the tropical heat was too onerous for a white man who was not used to this climate," he told SBS News.

"[So there was] the so-called Kanaka slave trade, which was basically enticing Pacific Island people to Australia with promises of good conditions or just kidnapping them." A boat arriving in Queensland from the Pacific.
State Library of Queensland

"Historians question the degree of agency that Pacific Islander people had in these contracts. But the reality of it was in many cases this was forced labour ... We were emulating the example of the slave states in America."

"It's a very sad and sorry history and one that everyone who was in authority in colonial Queensland was somehow complicit in."

As as result, some are again calling for the removal of a statue of businessman Robert Towns in Townsville, who was involved in this trade.

I live close to a statue of Towns.’Godfather of the slave trade’ He made his fortune by ‘blackbirding’. In the same park today when I walk by I’m never stopped - Ever. Aboriginal people are routinely stopped & asked to ID themselves by police#AboriginalLivesMatter #Townsville pic.twitter.com/V2RtpQVXJs

Robert Towns (a well known blackbirder) would be my pick. Slavery is evil - full stop. https://t.co/k1uxRtxjcu

Professor Scates, who has researched Australia's colonial statues, said there could be two ways to move forward.

"One is we simply tear these monuments down. And I understand the reason for that outrage in so many ways, I endorse it and affirm it ... By tearing them down we're saying we no longer belong to that past, that is not an Australia we want to belong to," he said. 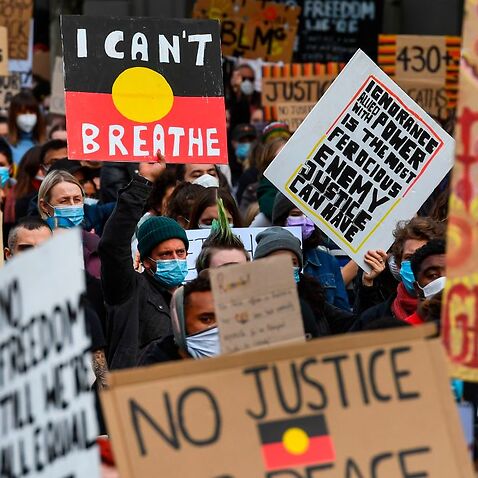 But he said another avenue is to create new monuments as part of the old ones, echoing Mr Wyatt's calls.

He cited the Explorers' Monument in Fremantle, which was erected to honour three men killed by what it calls "treacherous natives" in the Kimberley region in 1864.

A plaque was added in 1994 with the Indigenous perspective on events.

"No mention is made of the right of Aboriginal people to defend their land, or of the history of provocation which led to the explorers' deaths," it reads. 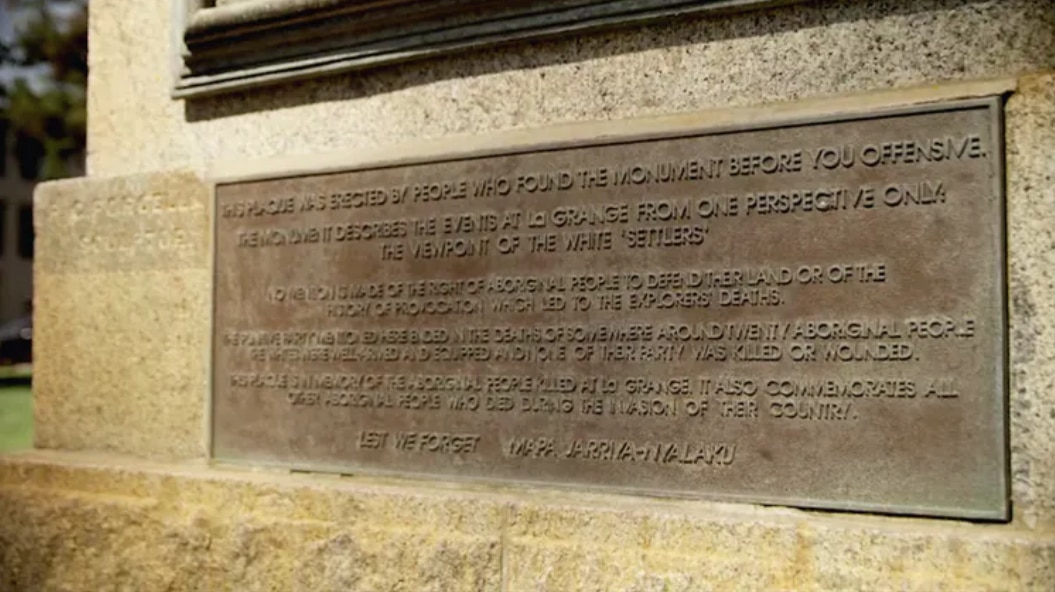 The plaque added to the Explorers' Monument in 1994.
NITV

"It seems to me that with every statue in Australia that proclaims white power and white privilege there's an opportunity to take up a task of critique," Professor Scates said.

"They can be turned from symbols of racism and power and privilege into statements for the need for a more inclusive society."

Either through removing or amending these monuments, Professor Scates said Australia now needs a "reckoning with these symbols of our colonial past".