The Maldives has re-joined the Commonwealth under its new president after Indian Ocean archipelago nation quit the international body in 2016.

Maldives has re-joined the Commonwealth, bringing the total number of nations in the global organisation to 54, it has been announced.

The change came into effect at midnight on Saturday - just over an hour after the United Kingdom left the European Union.

The republic quit the Commonwealth in 2016 after being threatened with suspension over its human rights record and lack of progress on democratic reform.

Today we write a new chapter in our multilateral engagement, as we rejoin the Commonwealth as it’s 54th member state. The commonwealth is an organization whose values of human rights, good governance and democracy promotion remain vitally relevant to us.Thank you @commonwealthsec pic.twitter.com/QVVbVRQ0Sy

President Ibrahim "Ibu" Mohamed Solih, a campaigner for democracy during decades of autocratic rule who was elected in 2018, pledged change and swiftly applied to rejoin.

The island nation has been readmitted after showing evidence of functioning democratic processes and popular support for being part of the family of nations.

Pro-Brexit supporters celebrate after the UK officially leaves the EU, outside the Houses of Parliament in London.

"The reform process under way in Maldives aligns with the values and principles of the Commonwealth and we encourage the nation to continue on this path.

Baroness Scotland consulted the other Commonwealth nations, who all had to agree to Maldives' readmission for it to go ahead. Celebrations and commiserations as Britain prepares to Brexit

Famed for its sandy white beaches and luxury tourist resorts, the Indian Ocean archipelago - home to around 500,000 people - is formed of nearly 1200 islands, most of them uninhabited.

During his election campaign, Mr Solih vowed to promote human rights and, since his surprise win, political prisoners have been freed and exiled opposition figures have returned to the islands.

The Union flag taken down outside at the European Parliament in Brussels. Meanwhile, Maldives has rejoined the Commonwealth.
PA Wire

The country faced an assessment including two site visits and consultations in accordance with the rules and procedures agreed by the Commonwealth Heads of Government in Kampala in 2007. 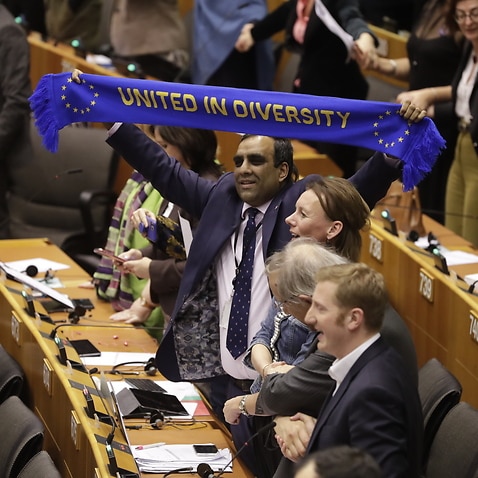 In 2016, the Maldives government quit the global body under former president Yameen Abdul Gayoom, saying it had been treated "unjustly and unfairly".