Ashleigh Barty has become the second Indigenous Australian to win the French Open. Moments after lifting the Suzanne Lenglen Cup, she paid homage to the trailblazer who came before her.

Ashleigh Barty etched her name into the record books by becoming the fourth Australian woman to lift the French Open trophy and the first since Margaret Court in 1973.

"Evonne sent me a text a couple of days ago and said this was her first slam and spotted her name on the trophy," Barty told reporters at the post-match press conference in Paris.

Barty, who had not proceeded passed the second round of the tournament in her five previous visits, attributes her success to a "path" laid by Goolagong Cawley. Goolagong Cawley was one of the world's leading players in the 1970s and early 1980.
AAP

"It's amazing how she's created this path for Indigenous tennis in Australia and I think now it's becoming more nationwide," she said.

"There's more opportunities for kids to play tennis, both male and female, and I hope we can continue to create those opportunities and let kids know that this is an option for a career. And even if it's not, it's a sport that they can play for life."

Goolagong Cawley said Barty's victory in Paris was "a joy to watch".

"What a wonderful result for Australia and how exciting that another Aboriginal has won at the French," Goolagong Cawley said in a statement.

"I'm almost scared to say it but it's now 48 years ago I won my first Slam there, too.

"Tennis Australia and lovers of tennis here and around the world will be delighted by the natural skills and flair Ash possesses. Now they have developed into a beautiful game full of artistry, movement and power. It was there for all to marvel at in Paris."

Goolagong Cawley and her husband Roger Cawley said they didn't get to bed at their Sunshine Coast home until 6am after receiving international phone calls over Barty's victory.

Evonne Goolagong Cawley and her husband Roger Cawley said they didn't get to bed at their home on the Sunshine Coast north of Brisbane until 6 am after receiving frequent international phone calls over Barty's victory.

She also passed along her congratulations to Barty in Paris, but wanted to keep the contents of the exchange confidential.

"Ash has already heard from me and knows how happy I am for her and her lovely family." Ashleigh Barty holds the trophy after her match against Marketa Vondrousova.
AAP

Barty says final slam of the match was the turning point

Despite the dominant performance, Barty said it wasn't until the final slam of the match that she knew victory was sealed.

"I was trying my best to be ready for every single point, to not let those outside thoughts enter my mind too much and just focus on what I was doing well," she told SBS News Chief Europe Correspondent Ben Lewis.

"I felt like I was able to simplify that rhythm today and execute very well," she said, adding that the Australian support from home has been "incredible".

"Not just at home, but even here in Paris. The amount of Aussie accents I have heard in the crowd has been amazing; and being able to speak to my family already has been very special and obviously I know that they were up and watching. It's been really nice to have the support from everyone. I'm a very lucky girl."

The legendary @rodlaver was on hand to watch @ashbar96 win her first Grand Slam title. He was thrilled for her. @SBSSport @SBSNews #FrenchOpen pic.twitter.com/FMXOeBvB2a

The new queen of clay will also pocket a cool $3.74 million for the win and rockets up the rankings to the world No.2 spot, making it the highest placing for an Australian woman since Goolagong Cawley reached top spot in 1976.

Barty's coach Craig Tyzzer admits he never ever expected his charge to win the French Open, but hailed her fighting spirit as the key to success.

"It really wasn't in our thoughts at all," Tyzzer said.

"It was to get through it match by match, really.

"We prepare for every match the same, I think when you see who has come through the draw here, it's up to anyone.

"To go this far? Our expectations weren't that high and she's done an incredible job."

Barty is a Ngarigo Indigenous woman who grew up in Springfield, a suburb of Ipswich Queensland.

She became a Tennis Australia Indigenous ambassador in 2018, a role which aimed to reach more than 1000 Indigenous youths in the Northern Territory each year. She previously said the appointment made her feel "very proud".

“I’m a very proud Indigenous woman and I think that for me taking on this role is something very close to my heart. I’m very excited,” Barty said.

“If we can get more kids playing tennis more kids enjoying tennis across Australia within the Indigenous communities that would be amazing."

I’m very proud of my Indigenous heritage and to be named as a National Indigenous Tennis Ambassador. Giving back to my community is very important to me and I hope to inspire many more Indigenous kids to get active and enjoy their tennis 🖤💛❤️ pic.twitter.com/NBFFhMcmZD

She first picked up a tennis racket at the age of four and began working with her longtime junior coach Jim Joyce at the West Brisbane Tennis Centre.

By the age of 12, she began playing against male adults. Two years later, she was participating in international tournaments.

Messages of congratulations are flowing in from those within the tennis world and beyond.

People @ashbar96 was playing cricket 3 years ago!!!! And doing local tennis coaching!!! Crazy!!! Ok am now going to cry along side all you Aussies as they play the anthem!!!

Congratulations to #RG19 champion, @ashbar96! The first major win is so sweet. Proud of you! 🇦🇺 https://t.co/pQ4VLUQCHS

Fantastic display of clay court finesse and power under pressure in windy conditions from @ashbar96. Well done! what a tournament!!

Exactly three years ago, @ashbar96 had just returned to tennis after taking a break from the sport.

.@NACCHOChair A big shout out to #AshBarty, the first Australian to win a grand slam in 8 years!

And the first Indigenous Australian since the great Evonne Goolagong Cawley to do so since 1971! ( 1 of her 8 slams )

After winning junior Wimbledon in 2011, Barty struggled to deal with the expectation and pressure placed upon her young shoulders and sensationally walked away from the sport disillusioned and desperate for a break.

She did continue to hit tennis balls during her sabbatical with Joyce and admitted she always knew she'd return.

However, she said the time spent with cricketers like as Australia internationals Beth Mooney and Jess Jonassen had a huge effect on her. 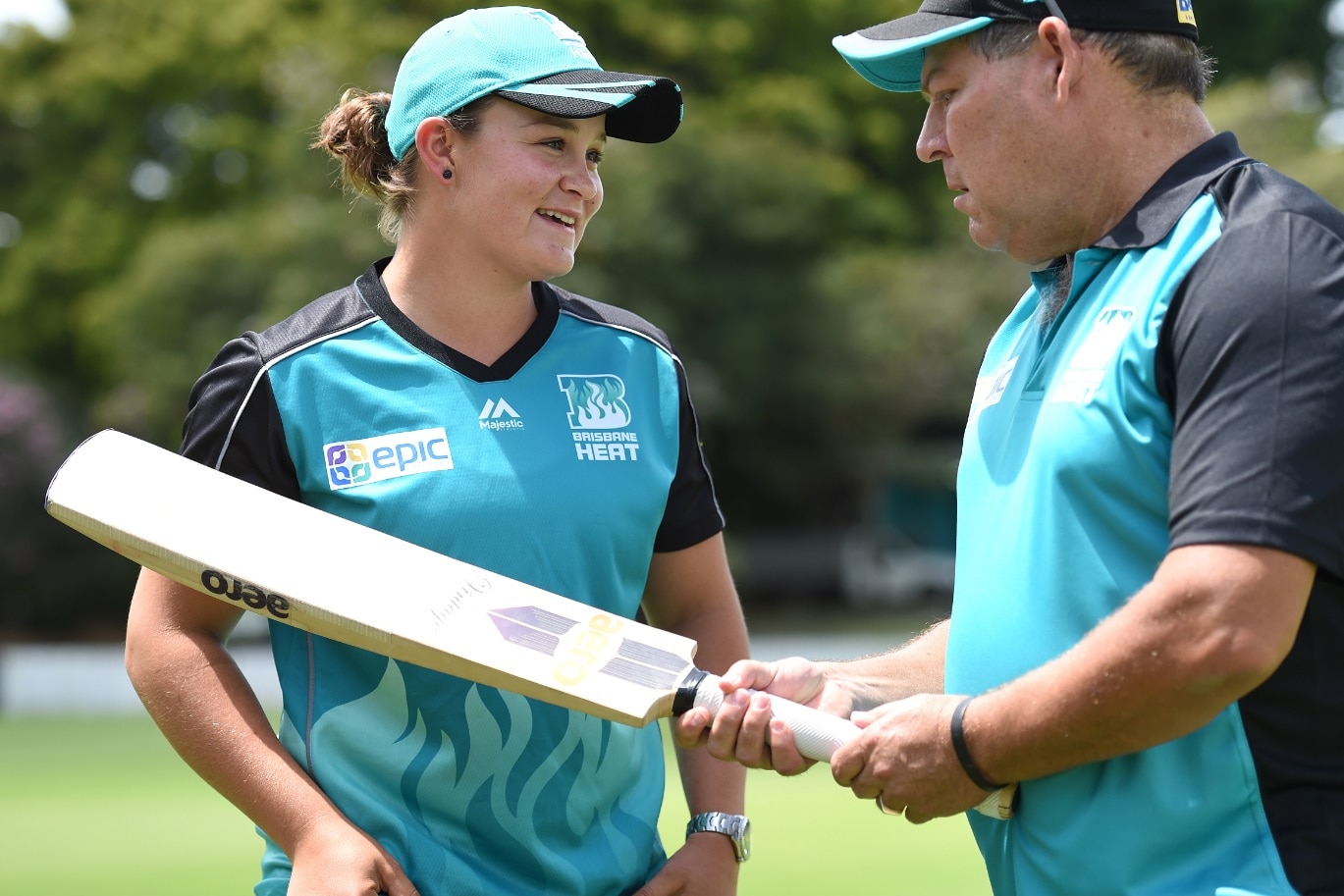 "It truly was an amazing period of my life," Barty said.

"I met an amazing group of people who couldn't care less whether I could hit a tennis ball or not.

"I got an amazing amount of messages over the last couple of days from those cricket girls who were some of my best friends.

"The way they are accepting of someone new coming into their locker room, into their dressing room and into their sport was amazing."

Barty will officially have her rank updated to No. 2 in the world on Monday when she will turn her sights to preparing for Wimbledon Tennis campaign next month.

Queensland Premier Annastacia Palaszczuk and Prime Minister Scott Morrison are the among the many Australians to heap praise on Ash Barty for her French Open tennis title victory.

"I think everyone across Queensland is once again very proud of Ash Barty," Ms Palaszczuk told reporters in Brisbane on Sunday.


"She is a great role model and inspiration to many young Queenslanders, I hope that they will dream to follow in her footsteps.

Earlier Mr Morrison had tweeted his congratulations to Barty "on a stunning victory in the French Open. Our newest Aussie champion!"

“Ash Barty is the first Australian woman to win the French open since Margaret Court and follows in the footsteps of Evonne Goolagong Cawley as one of Australia’s greatest ever Indigenous tennis players," he said in a statement.

"Ash Barty and Dylan Alcott have shown they are also true ambassadors for their sport and Australia, sports fans across the country will celebrate with them."