John Shipton has said he was aware of a meeting involving DFAT about extraditing Julian Assange to Australia.

WikiLeaks founder Julian Assange's father on Sunday called on Australia to bring his son home, saying he was shocked to see his son's condition after his arrest in London last week.

John Shipton - who was secretary of the Wikileaks Party when his son tried to run for a senate seat in 2013 national elections - reportedly visited Assange every Christmas at the Ecuadorian embassy in London after he sought refuge there in 2012. John Shipton has called on the Prime Minister and the Department of Foreign Affairs to intervene.
AAP

"DFAT (Department of Foreign Affairs) and the prime minister should in a nuanced way do something," Mr Shipton told Melbourne's Sunday Herald Sun.

"It can be resolved simply to the satisfaction of all. There has been some talk in a meeting between a senator and a senior DFAT official to extradite Julian to Australia."

Meanwhile, Assange's lawyer said he would cooperate with Swedish authorities if they reopen a rape case against him but will continue to resist any bid to extradite him to the United States.

"We are absolutely happy to answer those queries if and when they come up," Jennifer Robinson told Sky News television about the rape claims.

"The key issue at the moment is US extradition, which we have warned about for many years," she added.

The Australian has always denied the claims of sexual assault and rape in Sweden. The first expired in 2015 and the other was dropped in 2017, but the alleged rape victim has now asked for the case to be reopened.

If Stockholm makes a formal extradition request, the British government will have to decide whether to consider it before or after that of the United States.

Robinson said Assange would seek assurances from Sweden that he would not be sent on to America, saying: "That is the same assurance we were seeking in 2010 and the refusal to give that is why he sought asylum."

'Not above the law'

She added: "He's not above the law. Julian has never been concerned about facing British justice or indeed Swedish justice. This case is and has always been about his concern about being sent to face American injustice."

The US indictment charges Assange with "conspiracy" for working with former US Army intelligence analyst Chelsea Manning to crack a password stored on Department of Defence computers in March 2010.

He faces up to five years in jail.

Mr Shipton said he was shocked to see the state of his son when he was arrested at the embassy on Thursday on allegations of skipping bail and on the US extradition warrant related to a huge leak of official documents.

"For months and months he has been living like a high-security prisoner, he can't even go to the toilet. There have been cameras watching his every move." 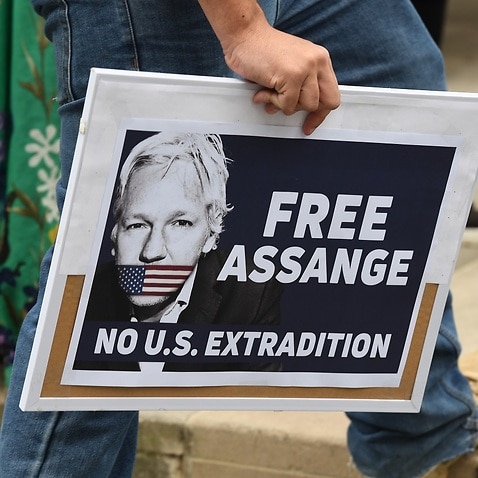 The WikiLeaks founder is in custody in London awaiting sentencing for breaching his British bail conditions in 2012 by seeking refuge in Ecuador's London embassy to avoid extradition to Sweden. British lawmakers on Saturday urged their government to prioritise any extradition bid Sweden might make for him over the allegations.