Two Iranian children and their mother have received payments from the Commonwealth after settling their claims of mistreatment in detention.

An Iranian asylum seeker family has received at least $100,000 after suing the Commonwealth over their mistreatment while in Australian detention facilities.

The compensation paid to the brother and sister, now aged 11 and 16, along with their mother, was approved at the NSW Supreme Court last week. One child was awarded $50,000 and the second child received a confidential sum. The mother also received $50,000.

It was made with regards to the "traumatic experiences they suffered and witnessed in detention centres operated by the Commonwealth," court documents said.

SBS News has chosen not to name the children or their parents.

According to court documents, the family fled Iran in 2010 after "fear of imprisonment, torture and death". They tried to come to Australia via Indonesia before being picked up at sea by an Australian Border Protection vessel.

The family was held in immigration detention on Christmas Island, in the Asti Motel in the Northern Territory, and the Inverbrackie Detention Centre in South Australia, over a period of about nine months from 2010 to 2011. The family was held on Christmas Island.
Getty

The family claimed the Commonwealth "breached its duty of care by failing to provide adequate medical assessments, care and treatment; failing to prevent exposure to traumatic events; and failing to remove them from immigration detention once it was clear the family was suffering from mental harm caused by the detention", a court document said.

The family claimed they were "exposed to numerous psychiatric stressors while in detention", including witnessing detainees engaging in self-harm and attempting suicide.

The children in particular "suffered from being in relatively harsh conditions where there was little intellectual stimulation for children, diversionary entertainment, or normal childhood interaction", they claimed. In a statement provided to SBS News, the Department of Home Affairs said: "The Commonwealth continues to deny liability in relation to this proceeding".

"The Court delivered its judgment approving the settlement reached between the parties in October 2018. The Court did not make findings in relation to the evidence filed or the Commonwealth's duty of care."

As part of the case, the Commonwealth counter-sued Serco and IHMS, which provided certain services at the detention centres.

'Trying their best' to continue their life

Shine Lawyers' solicitor Michael Inger, who worked with the family, said in all three detention facilities, "there was an alleged failure to provide adequate treatment.

"It was alleged they should have had more psychological treatment [and] ongoing ability to access such treatment," he said.

"If they had access to extra medical attention, we said the outcome would have been a lot better from a psychological position."

The family is now "trying their best" to continue their life in Australia, he added. Mr Inger said there have been other cases in which asylum seekers have been awarded compensation by the Commonwealth.

In 2006, 11-year-old Iranian boy Shayan Badraie received an out of court settlement from the Australian government after witnessing attempted suicides and abuse at Woomera and Villawood detention centres from the age of five. The government also had to pay Shayan's legal bill of more than $1 million.

The group also alleged that during their time on Manus, they had endured "physical and psychological harm". 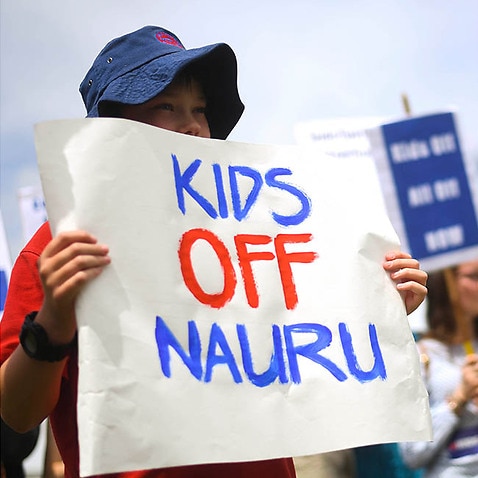 Founder and president of campaign Doctors for Refugees Dr Barri Phatarfod said last week's judgement shows "Australia does have a duty of care to these individuals".

"[It also] acknowledges the harmful aspects of detention, including the inherent delays in providing medical treatment in such a remote location with overly complex bureaucratic requirements to obtain requisite treatment," she said.

"Many children have suffered significant delays in obtaining the treatment recommended by doctors."

Dr Phatarfod said the case of Shayan Badraie "was one of the first cases we saw when a young child stopped eating, drinking and began wasting away."

And, she claimed, there may have been many others like it since.

"The government settled rather than have those details heard in court," she said.

"Years later we know of so many similar cases involving an even longer delay in care. It's hard to know how many have gone to court and received a settlement as many have confidentiality provisions." The compensation paid to the Iranian family comes as two lawsuits on behalf of 1,200 asylum seekers transferred to Manus Island and Nauru were launched this week in the High Court.

The case will be brought against the Commonwealth by legal advocacy group the National Justice Project and lawyer Julian Burnside QC.

The group will claim they have experienced "torture, crimes against humanity and the intentional infliction of harm by the Australian government".

The Department of Home Affairs previously declined a request for comment on the case.

Speaking at the weekend, Prime Minister Scott Morrison said more than 100 children had been taken off Nauru in the past three months with less than 10 remaining. The government has said it is aiming to remove all asylum seeker children from the island by the end of the year.

Readers seeking support and information about suicide prevention can contact Lifeline on 13 11 14, Suicide Call Back Service on 1300 659 467 and Kids Helpline on 1800 55 1800 (for young people aged 5 to 25). More information about mental health is available at Beyond Blue.