An asylum seeker has been hospitalised with COVID-19 as fears grow over an outbreak in a Melbourne detention hotel. 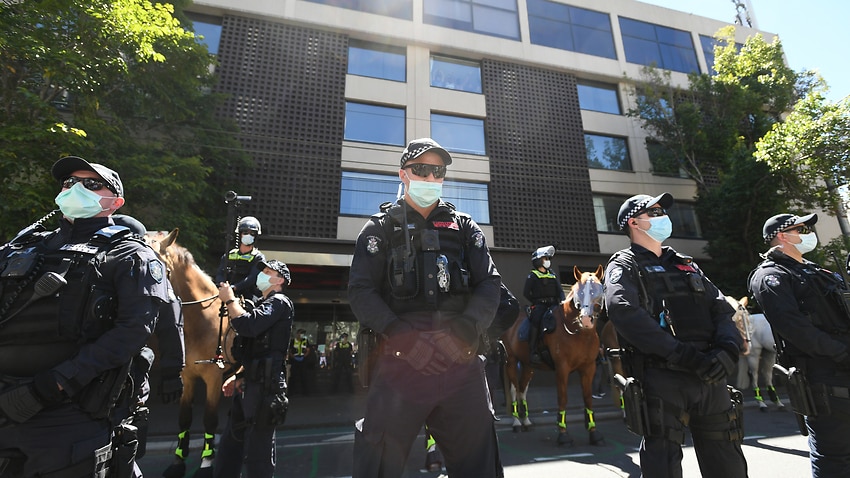 Police are seen outside the the Park Hotel in Melbourne, Saturday, January 09, 2021 Source: AAP

An asylum seeker detained in Melbourne's Park Hotel is currently in hospital with COVID-19, a court has heard.

As of Thursday evening, 15 asylum seekers have tested positive in Park Hotel, three are awaiting test results, and 28 have tested negative, according to the Australian Border Force.

In the Federal Circuit Court hearing on Thursday afternoon, lawyer Daniel Taylor asked for an urgent injunction to stop representatives of the ABF preventing paramedics from assessing detainees if ambulances are called.

"It's hard to imagine that the facility could have any infection control," Mr Taylor said in the hearing.

"It's been described as a COVID incubator ... to hold the [men] in there is endangering their lives."

The case was brought forward by an asylum seeker referred to as 'FGS20' who has tested positive for COVID-19.

SBS News understands one man who has tested positive for COVID-19 has severe burns to half of his body after a suicide attempt on Nauru.

I am sick with stress for my friends still locked up. I have asthma. If I was in there right now without a vaccination, its likely I would die. They are trapped like a cruise ship on the street. Their bodies are tired. They need freedom and healthcare. This needs to end NOW.

Speaking with SBS News, Mr Taylor said he wants the court to order that the hotel is an unsafe environment and for those who are negative to the virus to be moved to another facility.

"To hold them there simply exposes them to an extremely and unacceptably high risk of infection and death," he said.

Migration agent Noeline Harendran - who also represents the applicant - said he'd been denied Panadol and that there was just one nurse on site for the more than 40 asylum seekers detained at the Park Hotel.

"The hotel does not have fresh air. These men don't actually have access to go in and out and get fresh air, they can't open their windows," she told SBS News.

"They are unable even isolate themselves, they have no control over who comes in contact with them.

"The government has these people in their custody, you have to make sure they're safe."

Mr Taylor said that on Sunday an ambulance had been called for the applicant who collapsed in the shower.

He said after the man tested positive on Tuesday his condition had worsened and the man had difficulty breathing and issues speaking.

A statement from refugee advocate Jane Alcorn was read out in court that claimed she had attempted to call an ambulance for the man referred to as FGS20 on Thursday but they were not permitted to enter the hotel.

Ms Alcorn claimed the man was told by a nurse at the hotel never to call the ambulance again.

That claim was rejected by ABF lawyer Claire Roberts, who said there were "competing" versions of some of the facts and that the ambulance called for the refugee hadn't arrived at the hotel yet.

She said ambulances had been called for other detainees, including one who had been taken to hospital.

She also claimed that on one occasion where advocates called for help for the asylum seekers, two ambulances had arrived for the one man.

"[The applicant] is not assessed to be someone of very high need and that may be why ambulance taking a while to get there," Ms Roberts said in the hearing.

In a statement on Tuesday, ABF said 61 per cent of asylum seekers in Australian detention centres had received their first dose and 52 per cent are fully vaccinated.

Mr Taylor said some asylum seekers were fearful that if they were vaccinated they would be deported to Papua New Guinea or Nauru.

"They do not feel free to make a choice, and hence many withhold from making that choice because they're not free."

The next court hearing for the case will be held on Tuesday.