The 13 asylum seekers behind the complaint say social distancing is impossible inside the immigration facilities, where five men are being forced to share a room.

Asylum seekers being held in Australian immigration facilities have lodged an official complaint with the Commonwealth Ombudsman, saying the conditions in which they are being held could lead to a "catastrophic" coronavirus outbreak among detainees.

The complaint has been filed by the Public Interest Advocacy Centre on behalf of 13 men currently being detained in government facilities, where they say up to five men are being forced to share one room and twelve men are sharing one shower and toilet.

BREAKING: We are filing a group complaint with the Cth Ombudsman for 13 men in Aust immigration facilities who fear that a COVID-19 outbreak could be catastrophic for detainees, staff & the community https://t.co/xpkc6qn44e @NJP_Au @WeFightForFair @RACSaustralia #auslaw #auspol

"We've had concerns for some time about conditions in immigration detention which we know are overcrowded and are a real hotspot potentially for the spread of COVID 19," he said.

"The concerns have been raised by leading infectious diseases and disease infection prevention and control experts and yet the government hasn't moved to try and reduce the numbers in those centres."

Spot on. And failing to act to reduce the risk from our overcrowded detention centres threatens to undo the progress we’ve made in the community. @PIACnews https://t.co/mVra6qgQQR

The 13 asylum seekers come from a number of countries including Bangladesh, Egypt and Iraq and are based in detention facilities across Australia, including at Villawood in Sydney.

The Department of Health has previously acknowledged that detention facilities pose an increased risk of extensive COVID-19 transmission.

The complaint said many of the men were suffering from pre-existing medical conditions that put them at greater risk of contracting a severe case of the virus, including diabetes, heart disease, lung disease and cancer.

"Even countries like Iran are releasing tens of thousands of prisoners and detainees as a result of this crisis," he told SBS News.

"Indonesia has released 30,000, and you're seeing the opposite in the United States where no action is being taken and prisons are now rife with the virus." A protester holds a placard saying 'welcome refugees - people just like us' during a demonstration in Brisbane.
AAP

Supporting the complaint was Jennifer Kanis, social justice principal at Maurice Blackburn, who called on home affairs minister Peter Dutton to do everything in his power to stop a coronavirus outbreak inside immigration facilities.

"Peter Dutton has complete power to move these people into community housing, where they will be safer," she said. 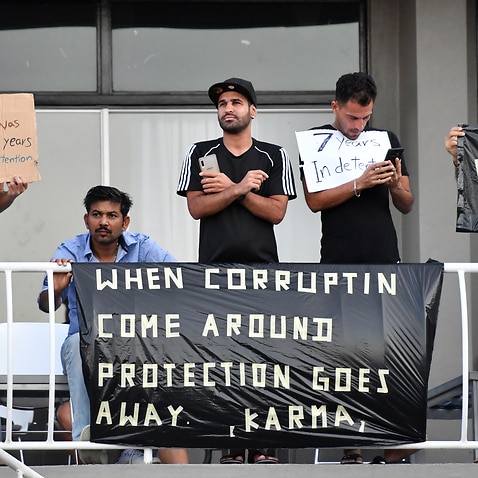 Both the Australian College of Infection Prevention and Control and the Royal Australian and New Zealand College of Psychiatrists have also called for the number of detainees in immigration detention to be reduced urgently.

A Department of Home Affairs spokesperson told SBS News it was continually reviewing health, hygiene and cleaning measures to manage to risk of a COVID-19 outbreak.

"Anyone who presents with flu-like or potential COVID-19 symptoms is being tested and quarantined, and receives appropriate medical care," the spokesperson said.

With additional reporting from Cassandra Bain.