Up to six repatriation flights from India are expected to arrive in Australia before the end of the month to return home thousands of Australians stranded in the country.

Repatriation flights for Australian citizens and permanent residents stranded in India will resume from 15 May after the government announced it would not be extending its controversial travel ban.

At least six repatriation flights from India are set to arrive in Australia before the end of the month after NSW, Victoria and Queensland expressed they would be open to accepting additional flights.

The proposal to restart travel had been initially signed off on during a national security committee meeting on Thursday to establish three flights to the Howard Springs quarantine facility in the Northern Territory.

"It's doubling the amount of repatriation and facilitated commercial flights we will see this month from three to what we anticipate is six," he told reporters after the meeting on Friday.

"But those details will be confirmed with those states and territories in those arrangements as we work together on that." Mr Morrison said the repatriation flights would focus on returning some 900 Australians deemed vulnerable in the country as India battles its surging COVID-19 outbreak.

But he said he wasn't prepared to put Australians at risk.

"All of this is about sensibly preventing a third wave of COVID-19 here in Australia," he told reporters.

"We are doing that responsibly while at the same time doing everything we can to sustainably bring Australians home from what is currently its most significant hot spot for those travelling into Australia."

Those boarding flights will be required to undergo rapid antigen testing for COVID-19, and will not be able to return to Australia unless they register a negative result.

The three initially organised Commonwealth repatriation flights will land in Darwin, where returning travellers will be quarantined at Howard Springs, which has a capacity of around 2,000 people.

About 9,000 Australians currently stranded in India have registered their desire to return home with the Department of Foreign Affairs and Trade.

The temporary travel ban, combined with potential fines and even jail terms for breaches, has faced sustained criticism from some members of the Indian community and human rights advocates.

However, the government has insisted the measure implemented through an emergency declaration under the Biosecurity Act is only there for the most serious threats. 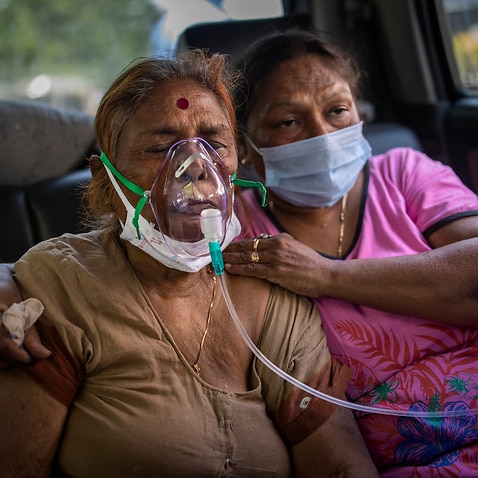 Mr Morrison would not commit to a timeline for how quickly Australians stuck in India would be returned.

"People want to know those flights are still going to be there a month from now, two months from now, and that they can make those arrangements," he said.

"That is why we are working hard to ensure we do it in a sustainable and safe way."

The government's temporary pause had been implemented to ease the pressure on the nation's quarantine system following a surge in coronavirus of Indian origin.

Chief Medical Office Professor Paul Kelly said the number of active cases at the Howard Springs facility in the Northern Territory had decreased from 50 to 21 during the suspension.

He said he stood by the decision to implement the emergency declaration to suspend travel based on India's increasing caseload.

"That real pressure that was happening in terms of positive cases in our Howard Springs facility has been relieved," he told reporters.

"[It] will allow in the coming weeks after the biosecurity determination sunsets on 15 May to increase those flights into Howard Springs and bring Australians home." Mr Morrison thanked the Indian Australian community for their patience following the implementation of the travel restrictions.

The first repatriation flight from India is scheduled to depart on 15 May.

India recorded another record daily rise in coronavirus cases of 414,188 on Friday, while deaths rose by 3,915, according to India's health ministry data.