Myanmar leader Aung San Suu Kyi has appeared before the UN's top court to defend her country against accusations of genocide.

Nobel peace laureate Aung San Suu Kyi faced calls for Myanmar to "stop the genocide" of Rohingya Muslims as she personally led her country's defence at the UN's top court on Tuesday.

Myanmar's civilian leader sat through graphic accounts of mass murder and rape as the west African state of The Gambia set out its case at the International Court of Justice in The Hague.

Thousands of people back home in Yangon rallied in support of the 74-year-old, whose silence about the plight of the Rohingya has tarnished her international reputation as a rights icon. Around 740,000 Rohingya fled to neighbouring Bangladesh after a bloody crackdown by the Myanmar military in 2017 that UN investigators have already described as genocide.

"Tell Myanmar to stop these senseless killings, to stop these acts of barbarity that continue to shock our collective conscience, to stop this genocide of its own people," Gambian Justice Minister Abubacarr Tambadou told the judges.

Muslim-majority Gambia accuses Myanmar of breaching the 1948 genocide convention and has asked the court, set up in 1946 to rule on disputes between UN member states, to take emergency measures to stop further violence.

"Another genocide is unfolding right before our eyes yet we do nothing to stop it," added Tambadou, a former prosecutor at the tribunal into the Rwanda's 1994 genocide.

"Every day of inaction means more people are being killed, more women are being raped and more children are being burned alive. For what crime? Only that they were born different." Aung San Suu Kyi (L) and members of her delegation appearing before the ICJ on the first day of hearings in the case the Gambia vs Myanmar at The Hague.
AAP

Tambadou later told reporters it would be "extremely disappointing" if Ms Suu Kyi repeated her previous denials of wrongdoing by Myanmar when she addresses the court on Wednesday.

Ms Suu Kyi, who 28 years ago today was awarded the Nobel Peace Prize, is expected to argue that Myanmar was conducting legitimate operations against Rohingya militants and that the ICJ has no jurisdiction in the case.

Her decision to personally lead the southeast Asian nation's case at the court has proved popular at home, where the Rohingya are widely regarded as illegal immigrants despite having lived in Myanmar for decades.

In Myanmar, flag-waving supporters joined rallies in support of Suu Kyi in several cities across the country on Tuesday, with some 2,000 people marching through Yangon and tens of thousands more in Mandalay.

Popular reggae singer Saw Phoe Khwa was among the celebrities who took to the stage in Yangon, imploring everyone to love each other before breaking into song.

"We have to stand behind her as she travels to defend our country's dignity," said 57-year-old Yangon resident Thant Zin, sporting Suu Kyi stickers on both cheeks. 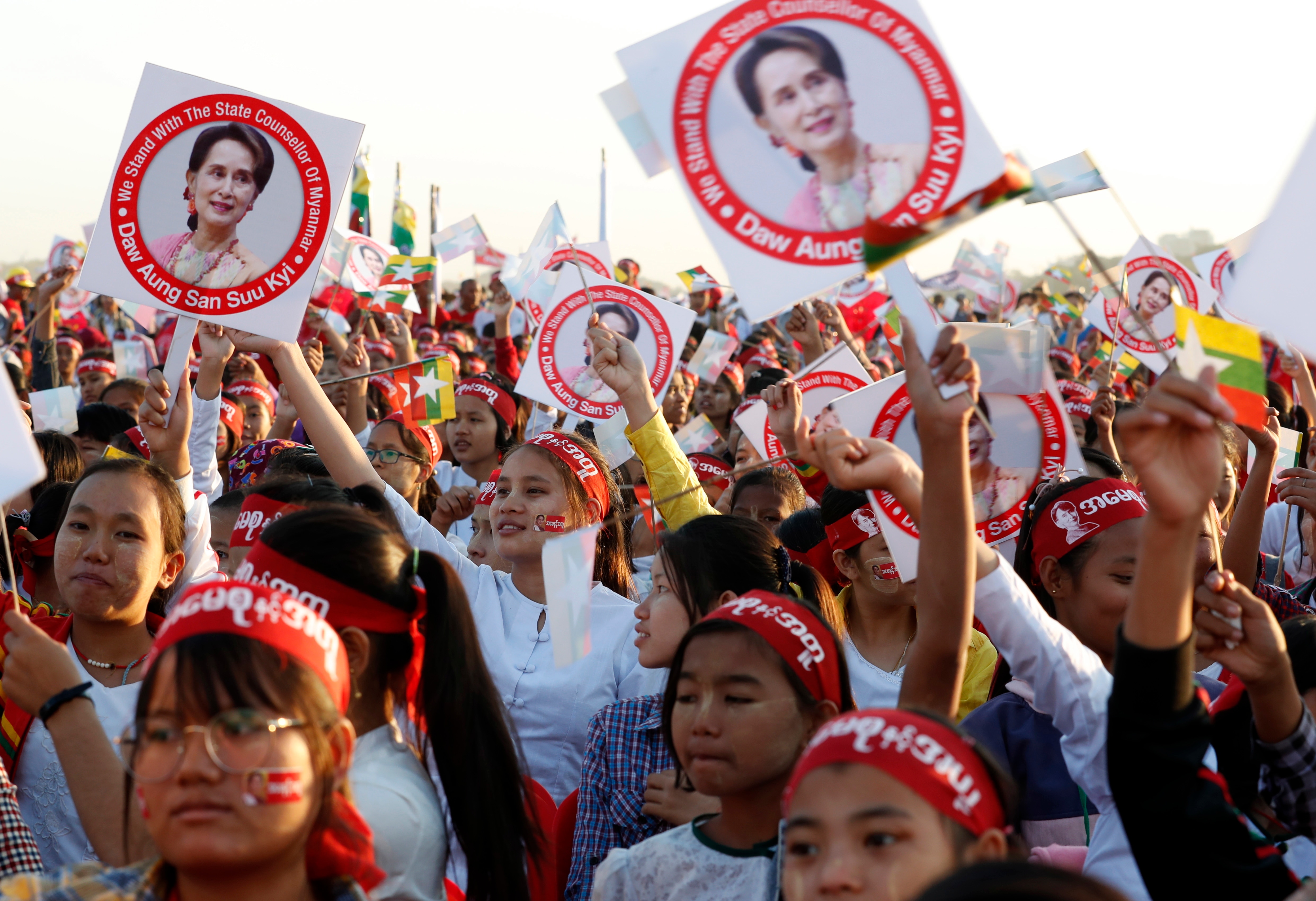 Rally organisers in Yangon told AFP they have permission from the city's authorities to live stream Wednesday's ICJ hearing on a big screen outside the City Hall.

The Gambia's lawyers however said the appearance of huge billboards across Myanmar in recent weeks featuring pictures of Ms Suu Kyi with three smiling generals showed she was "in it together" with the army that once held her captive.

"It can only be have been intended to show that they are all in it together and that Myanmar has absolutely no intention of holding its emboldened military leadership accountable," lawyer Paul Reichler told the court.

Strong emotions were also on show in The Hague.

A group of some 50 pro-Rohingya protesters gathered outside the gates of the ICJ for the hearing, carrying banners saying: "Say yes to Rohingya, justice delayed is justice denied".

"Today is the start for our right to justice," said Mohammed Harun, 49, who travelled from London for the hearings. "It's international justice day for Rohingya," he told AFP.

A small group of supporters of Ms Suu Kyi also unfurled a banner outside the court with the Myanmar leader's face on it saying: "We love you, we stand with you!"

"Suu Kyi is the only person who can solve this problem," supporter Swe Swe Aye, 47, told AFP. 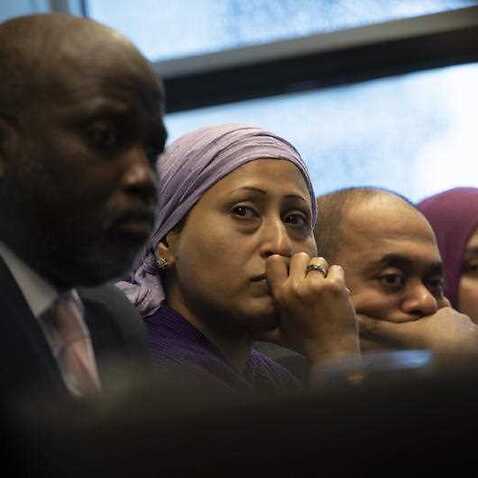 Why Africa's smallest country is taking on the Rohingya genocide crisis

Aung San Suu Kyi was once mentioned in the same breath as Nelson Mandela and Mahatma Gandhi, having won the Nobel in 1991 for her resistance to Myanmar's brutal junta.

After 15 years under house arrest she was freed in 2010 and led her party to victory in elections in 2015, but her defence of the same generals who once kept her locked up has since caused international condemnation.

ICJ judges have only once before ruled that genocide was committed, in the 1995 Srebrenica massacre in Bosnia.

Myanmar, however, faces a number of legal challenges over the fate of the Rohingya, including a probe by the International Criminal Court - a separate war crimes tribunal in The Hague - and a lawsuit in Argentina.