Australia's Great Barrier Reef also faced its first back-to-back years of mass coral bleaching across 2016 and 2017, according to the Bureau of Meteorology.

Australia has experienced the first back-to-back coral bleaching event in the Great Barrier Reef after sweating through the third-warmest year on record.

Dr Braganza said it was the ninth warmest year on record for waters surrounding Australia.

"This is the second consecutive year of bleaching following the event of 2016 and the only instance of back-to-back summer bleaching events on record." This map shows the mean temperatures across Australia in 2017.
Bureau of Meteorology

Mass bleaching events were not recorded prior to the 1980s by the bureau and the traditional owners of the area that takes in the reef did not document a major bleaching event.

Dr Braganza said Australia experienced its third-warmest year on record last year, coming in 0.95C above the 1961 to 1990 average.

The warmest months of the year were March, July, August, October and December.

They ranked in the top 10 warmest months on record, Dr Braganza said.

Dr Braganza added: "We have seen that warming [the 0.95C increase] across the land surface temperatures and in the oceans surrounding Australia.

"They have both warmed by a similar amount and it's consistent with global warming as well.

"That means odds favouring warmer than average temperatures more often than in the past, that's what we've seen when you look at the temperatures into the late 1980s and '90s. Sydney battered by 4,600 lightning strikes as SES responds to 150 calls

"It also means that when conditions are favourable, such as when you have an El Nino or when rainfall is lower over the Australian continent, we won't just get just warmer than average conditions, we actually start to push into one of the warmest years on record or record-breaking events."

Daytime temperatures were the second warmest on record in 2016, according to Dr Braganza.

"That warmth was right across the continent but the areas [with] very much above averages to highest-on-record occurred mostly over the east," he said.

"Of the capital cities Perth saw daytime temperatures close to average, but it was warmer than average in all the other centres.

"Sydney, Hobart and Canberra saw daytime temperatures in the top three warmest-on-record, while Brisbane saw maximum temperatures which were equal to last year... as warmest on record." 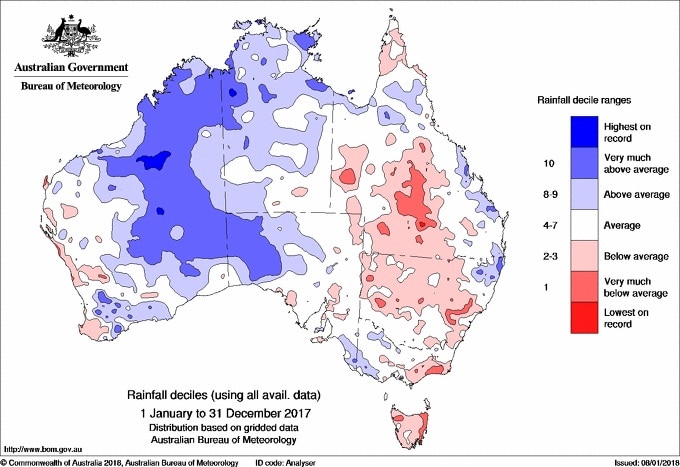 This map shows the mean rainfall across Australia from 1 January to 31 December, 2017.
Bureau of Meteorology

South Australia's far north town of Tarcoola sweltered through the hottest day of the year, with the mercury hitting 48.2C in early February.

As for what is to come, Dr Braganza said science did not allow them to a predict an accurate 12-month outlook.

But he was able to reveal what was expected in the next three months.

"We're expecting reasonable conditions for rainfall, so again consistent with La Nina light conditions in the Pacific Ocean, you would expect to not have a particularly dry summer," Dr Braganza said.

"We're going for reasonably high odds – 60 to 70 per cent across some parts of the east ... and WA as well - favouring wetter than average conditions over the January to March period.

"In terms of temperatures we're seeing odds favouring cooler than average conditions over parts of the continent where rainfall is expected to be above average - again the east coast again and WA."