Former NSW fire chief Greg Mullins says the wildfires ravaging the US are a 'direct reflection' of what happened in Australia last summer, and serve as another 'wake up call' to pay attention to climate change.

With up to 100 wildfires burning across multiple states on the US west coast, the situation is is eerily reminiscent of Australia’s deadly bushfire event of 2019-20.

Ross Bradstock is from the Centre for Environmental Risk Management of Bushfires at the University of Wollongong. He says what Australia went through last summer "is repeating itself in places like California". 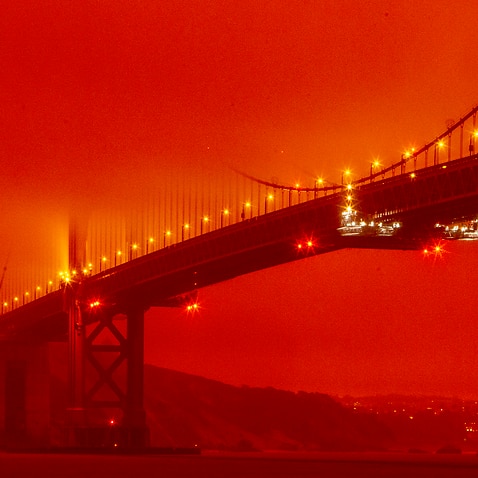 Former NSW Fire and Rescue Commissioner Greg Mullins has helped to fight fires in California several times since the 1990s. He agrees the current wildfires are "a direct reflection" of what Australia faced.

"The temperatures they're getting - you know, 49.4 (degrees) in the eastern suburbs of Los Angeles - nothing has ever come close."

Australia in January, California in August. This red sky is a warning to more than sailors. https://t.co/3uso5WRGdu

At least 24 people have died in the blazes across Oregon, Washington state and California.

And, just like in Australia last summer, records are being broken.

In California alone this year, more than 2.3 million acres have burnt – almost the size of Lebanon - compared to 118,000 acres last year.

There have been more than 2,600 fires in California between 1 January and 7 September, and an almost 2,000 per cent increase in the area that has been burnt, according to local fire authorities.

In Oregon, at least two people have died and hundreds of homes have been destroyed, with 35 fires burning more than 300,000 acres across the state.

As of Friday, 500,000 people across the state were put on notice to be ready to flee advancing flames. Oregon Governor Kate Brown said dozens of people have been reported missing after blazes in the counties of Jackson, Marion and Lane.

"This could be the greatest loss of human lives and property due to wildfires in our state's history," she said.

“More acres burned yesterday than in 12 of the last entire fire seasons in the state of Washington," he said.

Professor Bradstock said records - in terms of the size of the wildfires - have been broken virtually every year in California for the last four or five years.

“This almost certainly seems to be the outcome of climate change and it’s unfolding to a degree that is well beyond scientific predictions about climate change effects on fire," he said.

“It’s reinforcing a message that the climate is changing and it’s producing fires and losses of people that are unprecedented.”

On Friday, California Governor Gavin Newsom stood on a charred mountainside near the county of Oroville telling reporters "this is a climate damn emergency".

"This is real and it's happening. This is the perfect storm," he said. 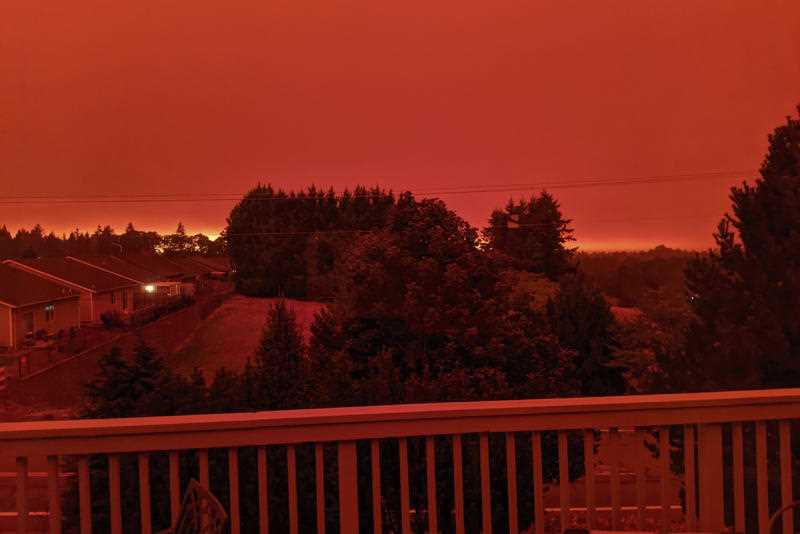 This photo taken from the home of Russ Casler in Salem, Oregon shows the smoke-darkened sky well before sunset at around 5 pm, Tuesday, Sept. 8, 2020
Russ Casler/AP

Mr Mullins, who has been an outspoken advocate for climate action, also described the fires as climate change in action.

"There's no question that the attribution is very clear in the extreme weather that drives these fires," he said.

"I hope that the tragedy in California and Oregon and Washington states that is unfolding, which I think it going to get much worse, is another wake up call." 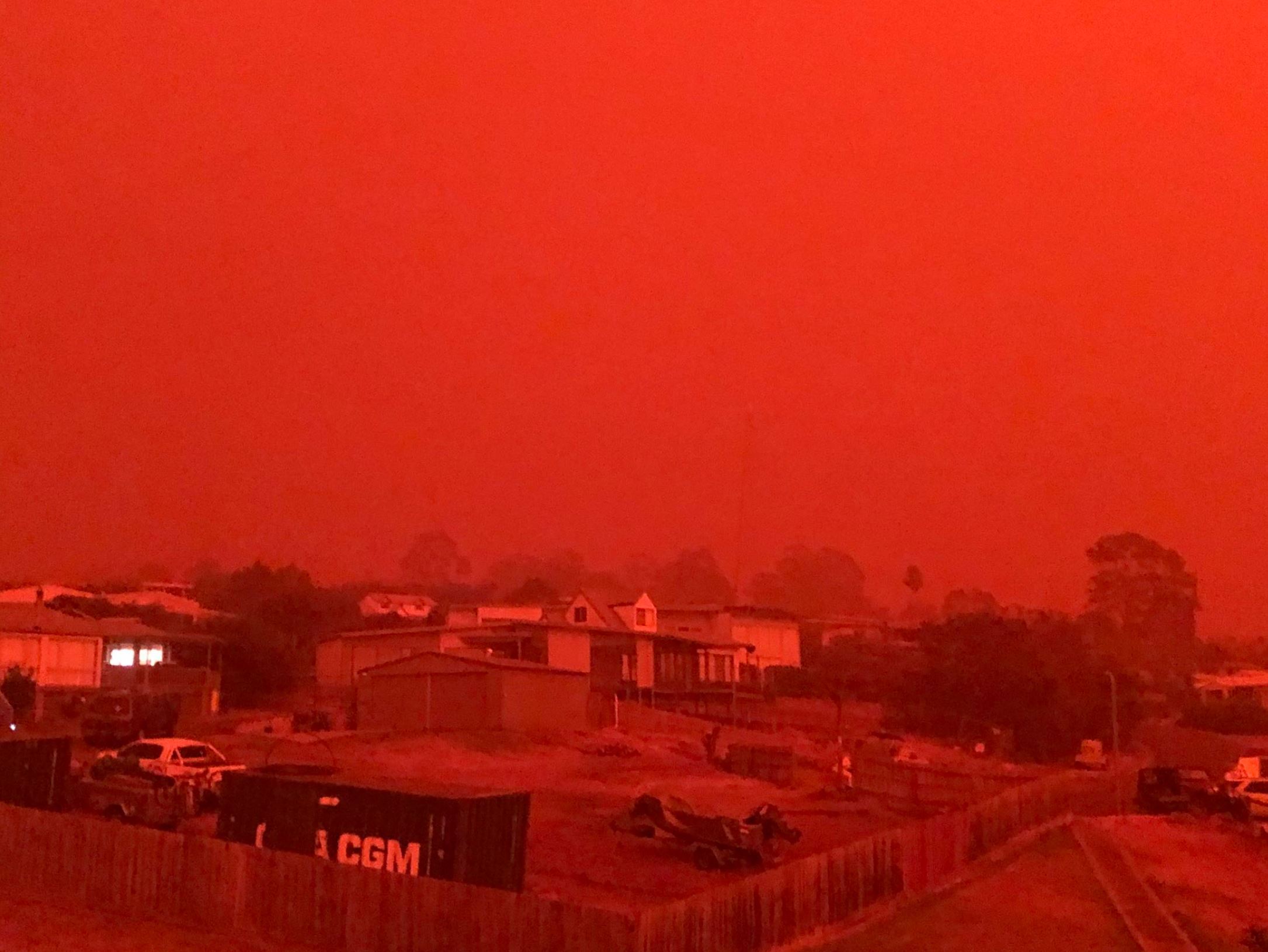 A red sky above Mallacoota in East Gippsland, Victoria on January 4, 2020.
SUPPLIED TWITTER
The former fire chief said seeing vision out of the US was triggering, as he finds himself quite damaged by years of service.
"I see the images of San Francisco, a city which I know very well, the orange skies, and I think back to the orange skies in Sydney," Mr Mullins said.
"I think back to fighting fires at Batemans Bay on New Year's Eve and the sense of desperation, and just not being able to do enough to help people."

What is ahead for Australia?

The good news for east coast residents of Australia is that we’re unlikely to see the same level of devastation as we did last summer, according to Professor Bradstock.

That’s because the fires were so severe that in some areas there is little fuel left.

“At this stage of the game, particularly around the eastern seaboard, the odds are we’re probably going to have a relatively benign fire season," he said.

“It’s not to say there isn’t the possibility of some major fires but we’re unlikely to see anything on the scale of what we had last summer.

“One of the reasons for that is very simple. In New South Wales, there were five million hectares burnt up around the coast last summer. That’s mainly forested areas and that simply means there’s very little fuel on the ground there at the moment."

He said the risk of fire will be low in those parts which were burnt.

Mr Mullins agreed, saying the moisture profile was very different along the forested regions in NSW in particular, and into Victoria.

A predicted La Nina event is likely to lead to parts of the country’s north and east being wetter than average through spring, according to the latest bushfire outlook.

Queensland, however, faces “above normal” fire potential in the south east and central coast, extending to the north, the Bushfire and Natural Hazard Cooperative Research Centre says. 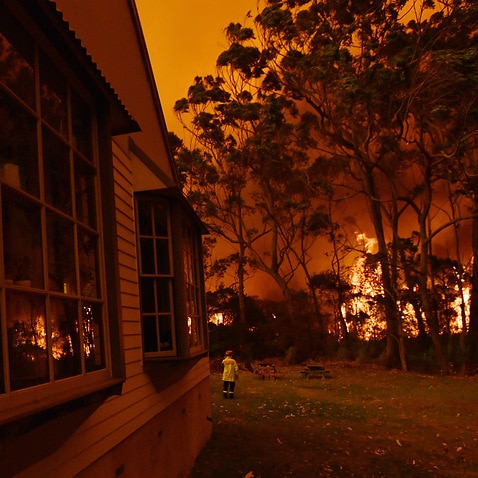 “At this stage, the odds are more or less in favour of a reasonably wet period in the weeks and months ahead which will dampen things down in our forested regions ... which will be a relief if that how it pans out,” Professor Bradstock said.

While wetter conditions will be a relief in the short term, these could lead to a greater risk of grass fires throughout summer.

“As we go into the back end of summer, if there is reasonable amount of rain that can promote the growth of grass and herbage particularly in the more open country … that can the dry out and create conditions for grass fires, which can be very fast moving,” Professor Bradstock said. 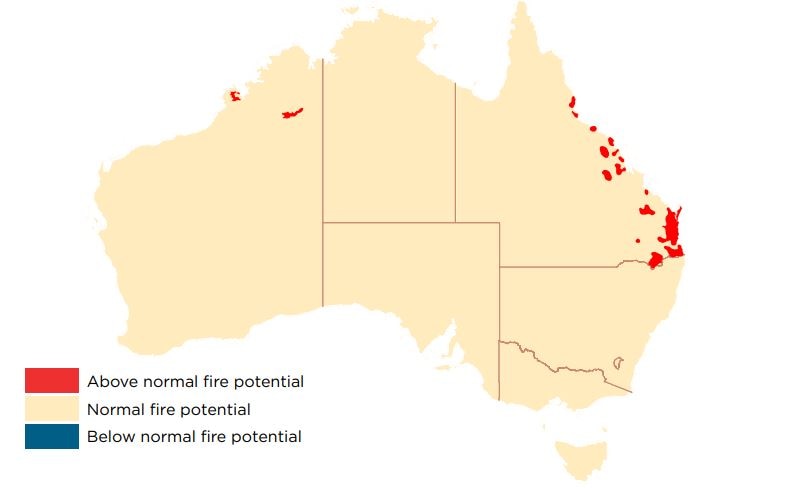 Worst may be yet to come for the US

Professor Bradstock said it’s still relatively early in the Californian fire season, which can stretch up until Christmas.

“Given the scale of the drought and the very high temperatures that have been occurring across the western US, there’s scope for bushfire seasons to go on and on, and perhaps set unprecedented records similar to what we had,” he said.

Mr Mullins had a similar warning.

"I've worked over there, I know what happens and they're not in their worst time yet, so the worst is probably still to come, particularly in southern California," he said.

Another concern is the sharing of resources, which will become increasingly difficult with overlapping fire seasons.

“This is a big concern. If we keep on having record-breaking events like this around the world, our ability to share equipment and people becomes increasingly constrained,” Professor Bradstock said.

While California governor made a callout for Australian firefighters last month, authorities cancelled the request on 3 September, citing improved conditions.

“Ultimately, having regard to the ameliorating conditions and long-range forecast, the US decided not to proceed with the deployment and it was formally cancelled on 3 September,” the Australian and New Zealand National Council for Fire and Emergency Services said in a statement.

With conditions now deteriorating once again, that may soon change.